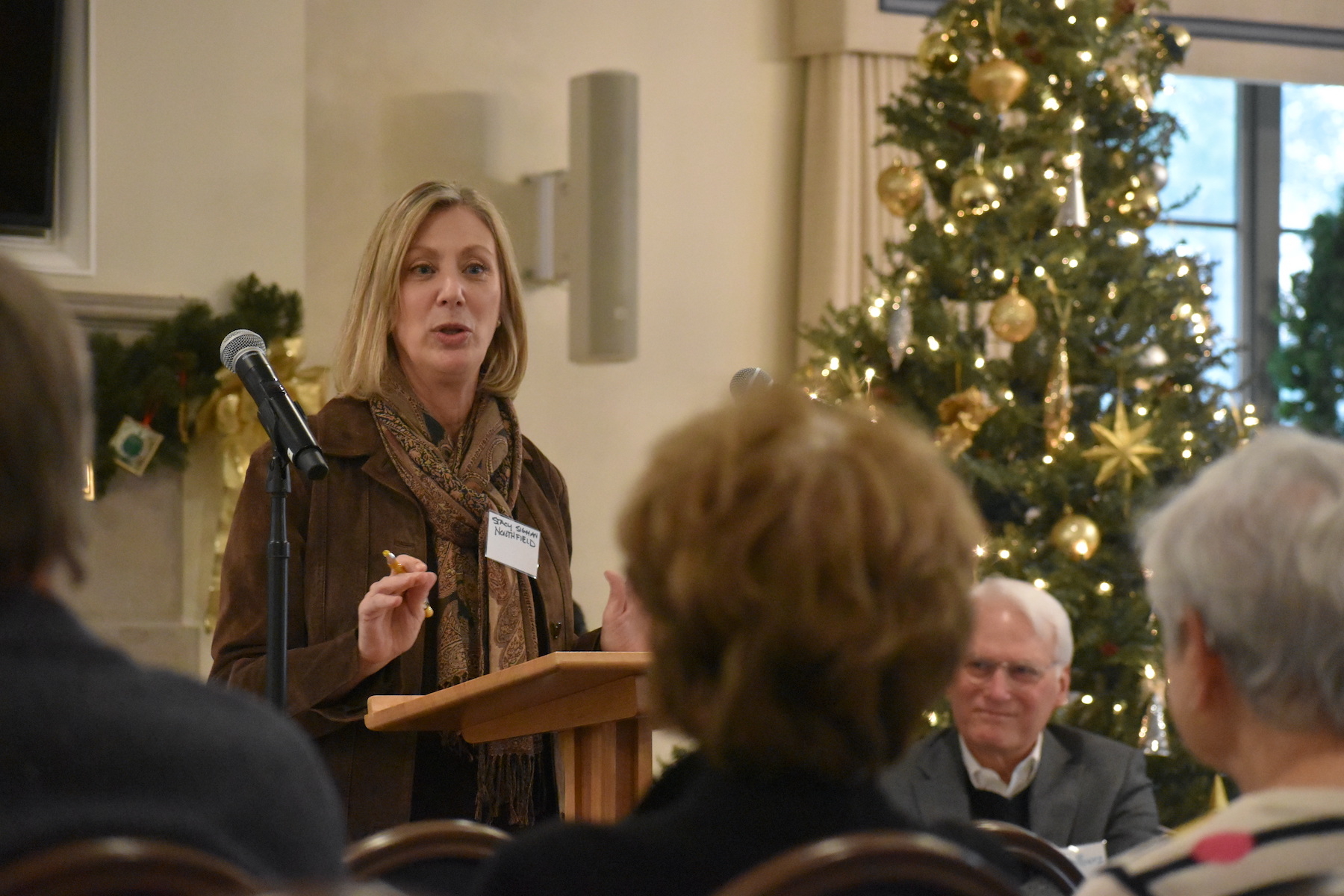 Northfield Village Manager Stacy Sigman speaks with the crowd at Kenilworth Union Church for the State of the Villages on Thursday, Dec. 8. | Photos by Joe Coughlin/The Record North Shore

It wasn’t New Year’s Eve, reminiscing about 2022 was the topic of conversation on Dec. 8 at Kenilworth Union Church during the annual State of the Villages from the League of Women Voters of Winnetka-Northield-Kenilworth.

Local officials from the three communities rotated at the lectern unpacking the highlights of their respective activity throughout the year.

• The selection of Tala Coffee to occupy the long-vacant, village-owned lot at 93 Green Bay Road,

• Forward progress on The Walden, a five-unit townhome development at 688 Green Bay Road,

• The latest with One Winnetka, which recently submitted new designs that received the council’s praise; however, the developers must resubmit designs after they acquired Conney’s Pharmacy, Bahan said, and

• A preliminary concept to transform the post office site into a town square.

Bahan also celebrated the relocation of the Winnetka Farmers Market and the reimagined Winnetka Music Festival, which he said brought 5,500 people to downtown Winnetka.

Winnetka also made headway in 2022 on substantial stormwater improvements, including the beginning of construction at Willow and Hibbard roads, on the western side of town.

Rintz spoke on how the Fourth of July mass shooting was a challenge for many communities in the area, and Winnetka was one of multiple towns who held special council sessions to hear residents ideas and concerns regarding firearm safety. A postponed followup meeting is planned for this month.

Village Manager Stacy Sigman spoke of the difficulties of a COVID-affected economy, including delays with capital purchases and troubles in attracting and hiring employees for all businesses.

With that said, Sigman praised the resiliency of Northfield’s businesses, evidenced by sales tax revenue that was 30 percent over-estimate, she said.

• initiated a community solar program as an option for its residents,

• made progress on completing a gap in the Skokie Valley Trail,

• approved an overhaul to its council chambers,

• is finishing the modernization of its water meters,

• is working on funding and logistics in efforts to improve safety, including adding a roundabout, along Happ Road.

Just like the Village of Kenilworth in 2022, Village Manager Patrick Brennan spent much of his time on stormwater improvements.

Kenilworth added stormwater detention under its roadways in a $6.8 million effort to mitigate flooding.

Brennan also talked about Kenilworth’s ailing business district and what officials are doing to try to fix “a face only a mother could love.”

He said residents, through surveys and other means of feedback, have been clear in their desire for “more places to gather” and the board is working to loosen its regulations to allow for more modern concepts, such as a brewery or winery, that suit that description.

A small cafe connected to the Kenilworth Assembly Hall opened in September, and construction is set to begin on a combination coffee shop-fitness studio in 2023 along Green Bay Road.

“We are sending a clear message, ‘Kenilworth is open for businesses,'” Brennan said.

The Village Board agreed in April to refurbish and reuse its decommissioned water plant as a community amenity.