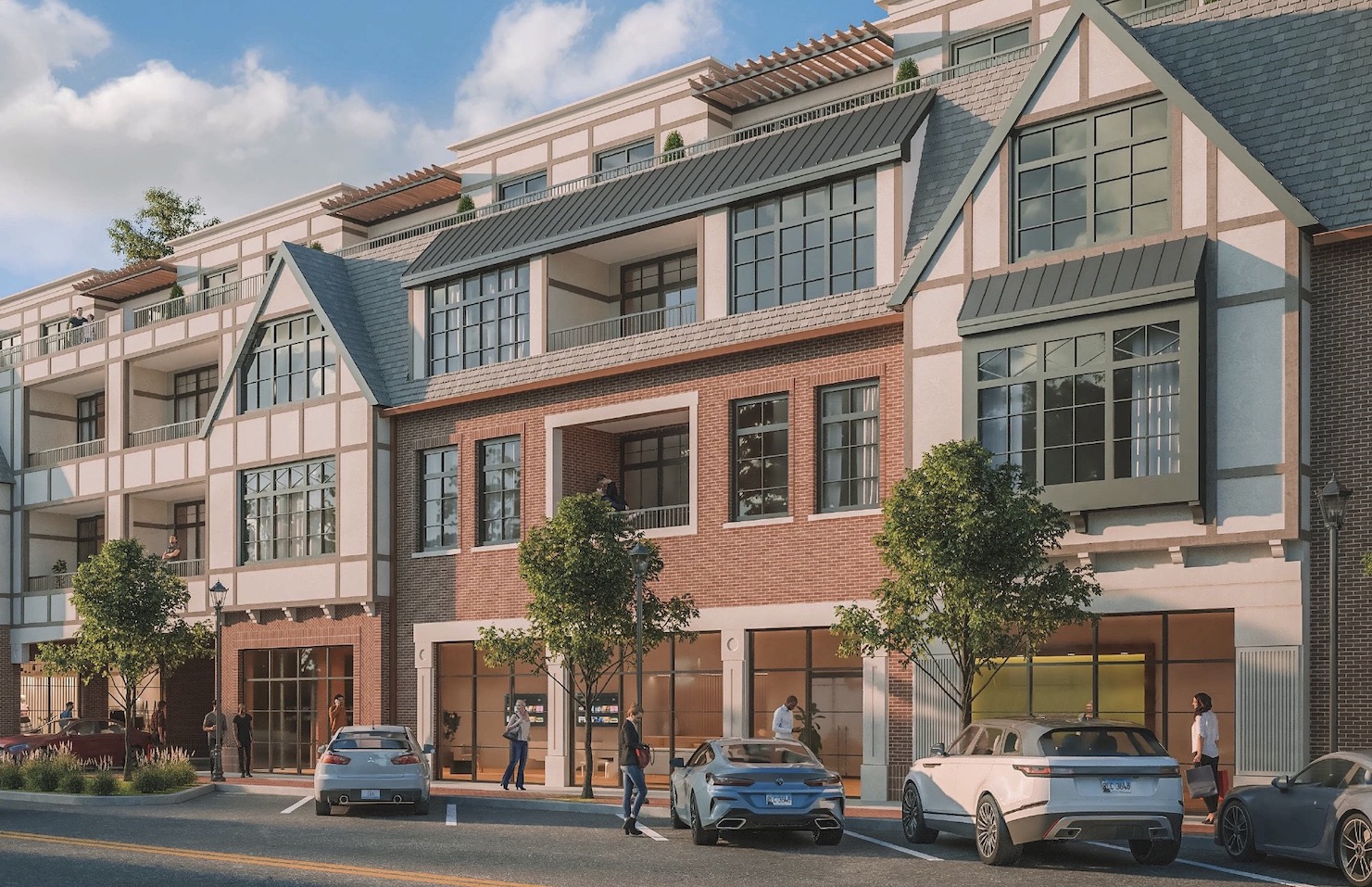 In the latest proposal, One Winnetka is four stories with commercial on the first level and residential on the remaining three. | Images by OKW Architects

For going on five years, plans for the major development known as One Winnetka have struggled to get off the ground. But developers may have finally found a foothold.

Nearly every member of the Winnetka Village Council shared positive feedback during the council’s meeting on Tuesday, Oct. 18, when a revised proposal was introduced to trustees.

Before starting his presentation with the board, Jon Talty — CEO of OKW Architects, One Winnetka’s design firm — told trustees that this was an opportunity to start anew.

“This is a new day. This is a new thing. We’re not looking back,” Talty said. “We’re simply looking forward and we are anxious for your thoughts on how we’re doing, how we’re presenting this project and … trying to navigate its ultimate success for the community.”

The original One Winnetka design faced tenacious criticism from neighbors and village officials until it was scrapped in 2019. Developers reemerged in December 2021 with a new plan for the site (southeast corner of Lincoln Avenue and Elm Street) and also faced criticism from trustees — primarily focused on the building’s height.

The newly proposed design consolidated the building to four stories and a maximum height of 52 feet, 6 inches — down from five stories and 64 feet, 6 inches. Talty told trustees that the final height will be determined through the planning process, but designers are committed to the building not being any taller than proposed.

Other changes include underground residential parking and grade-level public parking. Talty estimated that 155 parking spaces would be available underground and 39 above ground. The above-ground parking would be covered.

Talty also said the plans are to have service businesses, such as medical offices and financial institutions, on the ground floor; however, in response to board questioning, he said they would be open to having a boutique-style business as well.

One Winnetka’s developers would like to see 48 units, but that number could go up to 50 units or down to 46 units, Talty said. A public plaza may also be part of the project but that has yet to be determined.

Talty and trustees clarified multiple times that the finer details of One Winnetka would be figured out as the project moved through the Village of Winnetka’s various boards and commissions.

While no vote was taken, the feedback from trustees was mostly positive, with all council members thanking Talty and project partner John Murphy, with Murphy Development Group, for returning with a plan that incorporated their prior suggestions.

“(I’m) very happy the fifth floor is gone, and I think you’ve given a basis for developing something that could be really spectacular,” Trustee Andrew Cripe said. “There’s a lot of things I like, but there’s not anything that stands out that I don’t like.

“I know you have to develop it more, and I look forward to seeing how that works.”

“My only suggestion: Is there a way to put all the parking off of Lincoln?” she asked. “And you may have already looked at that, but I think it’s going to be an issue.”

Dalman also wondered that with neighboring communities also developing more housing, if One Winnetka would be attractive enough for those seeking the type of rental units it would be offering.

Village President Chris Rintz said that while there are some design elements he isn’t a fan of, he likes where the plans are now.

“I think this is a great start,” he said.

Rintz also encouraged Talty and Murphy to keep open communication with the neighbors of One Winnetka and to work with them to ensure everybody is happy.

“It would really be great to see you guys coming back in unison as friends and good neighbors, rather than competing interests,” he said.