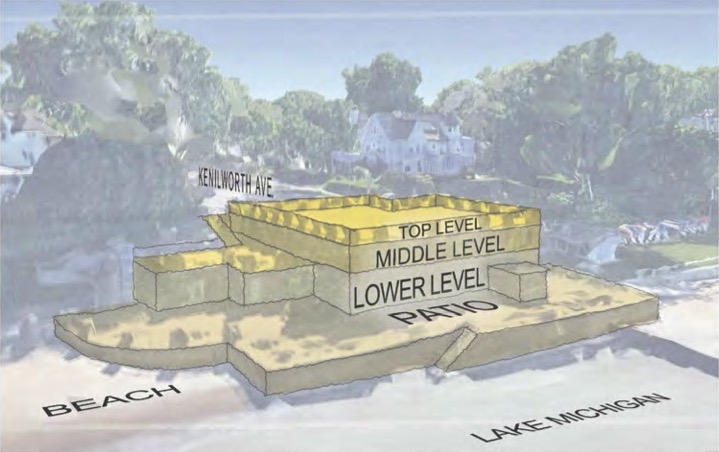 A rendering of a possible repurposing of the decommissioned water plant on Kenilworth Beach. | Village of Kenilworth

Whatever Kenilworth officials decide to do with the lakefront and beach, one aspect of the plan is for certain:

The decommissioned water plant will stay where it is.

That decision was revealed to the Kenilworth Board of Trustees at its regular meeting on Monday, April 18, as the ad-hoc Lakefront Planning Committee, which was established earlier this year, provided an update on the work it has done over the past few months.

The committee was formed following a January meeting in which the Village Board restarted discussions on how to improve the lakefront and Kenilworth Beach. The work had been put on hold following the onset of the COVID-19 pandemic in 2020.

The water plant, which was decommissioned in 2017, has been a major discussion point, with trustees considering the building’s fate.

Trustee Christopher Ottsen, a member of the Lakefront Planning Committee, said because of the high costs of its demolition and removal, members have decided to keep the plant.

“I think it’s (the) pretty unanimous opinion of the committee that the practicalities and costs of removing the water treatment plant in its entirety — demolishing it, rebuilding it — it’s impractical,” he said, adding, “The intent is to work with the existing water treatment plant with renovations.”

In addition to what Ottsen called the “initial decision milestone” to keep the plant, Trustee Alison Winslow, who heads the committee, said they are in the process of creating a detailed work plan and timeline for beach improvements.

“We plan on sharing that timeline at a future meeting when we have a better sense for the next steps,” Winslow said.

She added, however, that committee members hope water plant improvements are complete by 2024, with other “shore protection” elements of the plan done possibly as early as this coming fall.

The next steps include hiring outside firms to conduct detailed pricing reports on renovations to the water plant and improvements to the beachfront.

“Concurrently, we’re going to start the process of hiring design firms to help with both the shoreline protection plans as well as the renovation,” Winslow said. “And our goal is to have the high-level drawings to share with the community by late summer.”

Officials will use the summer to speak to residents and figure out what they would like to see in plans to improve the lakefront and beach.

“I think it’s great that you guys are pushing forward with it,” he said. “We’ve talked about this for years and it’s great to see progress and forward momentum. So, I’m excited to see the drawings this summer.”

Village President Cecily Kaz agreed and is looking forward to hearing what the residents want to see in the plan.

“I know that we’re hoping to really engage with the public starting even this summer while people are down at the beach to talk about what they would like to see there,” she said. “Stay tuned for that and fingers crossed for great summer weather.”