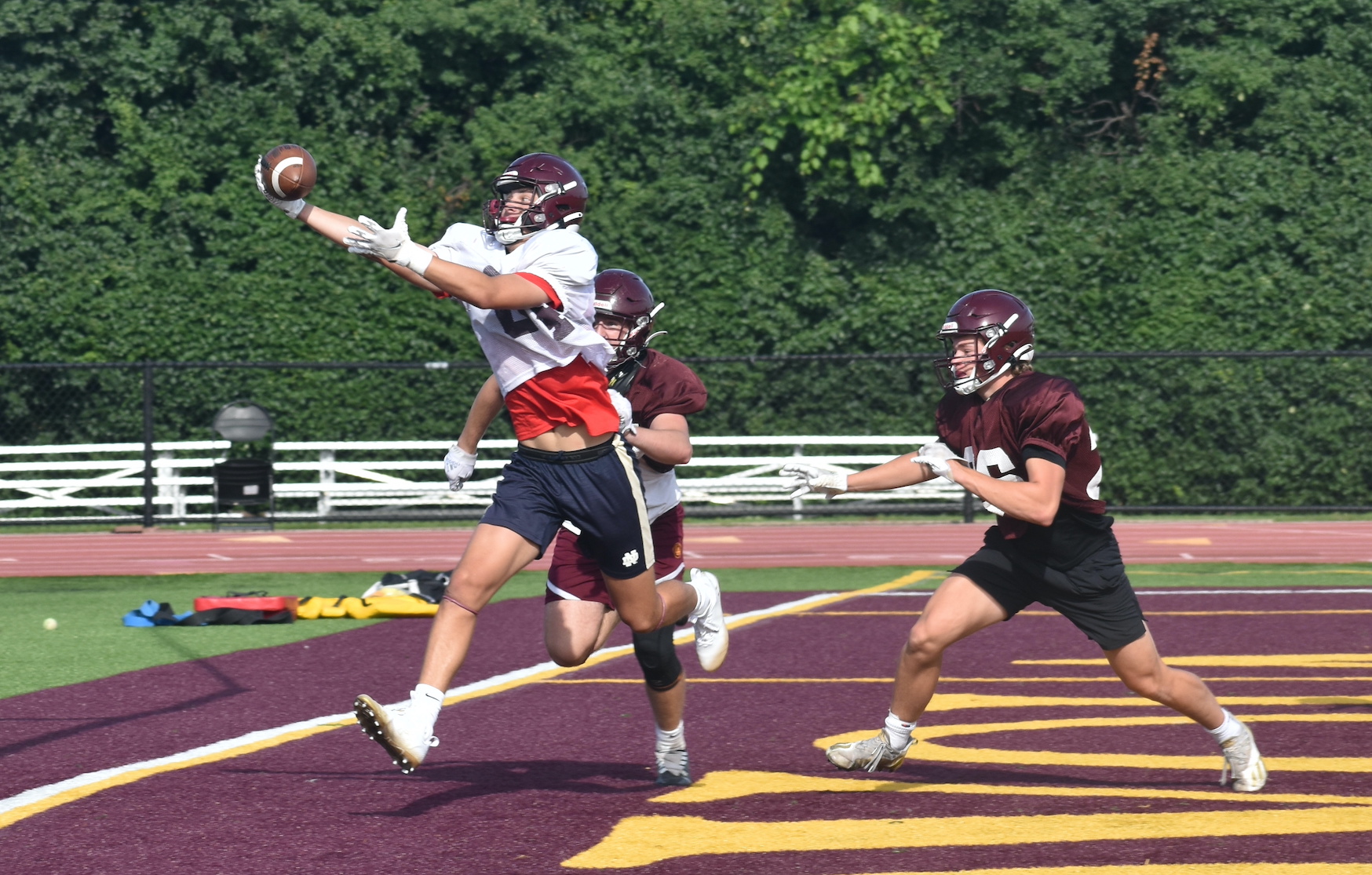 Being in the Illinois limelight is nothing new for Loyola Academy’s football team.

But being showcased on national TV for the first time — as reported by The Record in February that the Ramblers will be when they begin their season against perennial Ohio powerhouse St. Xavier of Cincinnati at noon on Sunday, Aug. 28 — is a whole new ballgame.

The excitement is rubbing off on schoolmates, families, friends and followers — and of course the 122 varsity Ramblers — who want to be part of the historic event. The clamor for the tickets that went on sale Aug. 15 indicates that a record crowd will be watching at Hoerster Field.

Senior defensive end Brooks Bahr believes this will be the start of something big.

Last fall the Ramblers advanced to the IHSA Class 8A semifinals before eventual state champion Lockport ended their 18-game winning streak that began with an undefeated, six-game spring season that was dictated by the COVID epidemic.

Five of Loyola’s regular-season opponents last fall also made it to the final four. Fenwick was the 5A champion; St. Rita lost in the 7A title game; and suffering semifinal losses were Marist in 8A, Brother Rice in 7A and Rochester in 4A.

The Ramblers were the consensus No. 1 team in Illinois in the spring season (that didn’t have a state tournament) and a case can be made that they would have made it all the way in the fall if superstar running back Marco Maldonado (598 yards rushing, 14 total TDs in 6 games) hadn’t sustained a season-ending injury at the end of the fourth game of the season at Brother Rice, where he set a single-game school rushing record.

“Without a doubt we’d have done it if we had Marco,” Bahr said. “Now, he’s at Colgate (playing college football) and he’s going to tear it up.”

Coach John Holecek is guardedly optimistic as he begins his 17th season at Loyola in quest of his third 8A state championship and 11th final four appearance in the last 13 possible seasons.

“A lot of guys who were starters on offense are coming back but very few on defense,” he said.

The passing game attack figures to be potent. Senior quarterback Jake Stearney completed 190 of 291 attempts for 2,179 yards and 19 touchdowns last season and his senior backup Luke Collins had 10 completions in 14 attempts for 135 yards and 1 touchdown.

“I think our strength on offense is experience,” said Stearney, a dual-threat who averaged 7 yards per carry in rushing 76 times for 553 yard and 5 touchdowns in 2021.

“We also have a third senior tight end who had a great summer — P.J. Hayes, a 6-5, 210(-pound) basketball player with length and athleticism,” Holecek pointed out.

The Ramblers suffered a setback when Corey Larsen, a senior slot receiver and dynamic punt and kickoff returner, broke his collarbone during summer practice drills.

“Corey was having a fabulous summer,” Holecek said. “He should be back in mid-year or late year but we lost some depth at the position when two kids tore their anterior cruciate ligaments in non-contact drills and won’t be back.”

Senior Quinn Foley has moved from wide receiver to fill the void at the slot.

In Stearney’s educated opinion: “Moving from outside is playing a whole new position with different roles but Quinn is showing he can do a great job at both and we have three big tight ends who are something special.”

Because of Maldonado’s season-ending injury and intermittent injuries to another graduated running back, Mike Regan, junior Will Nimesheim moved up from the sophomores in 2021 and got a lot of playing time as did seniors Kyan Gibbs and Peter Hogan. Also in the mix is Drew MacPherson, a junior with breakaway speed.

“We have a committee that can get it done,” Holecek said.

Nimesheim had two brothers who played for the Ramblers and Holecek remembers them well.

“Both Jack and Quinn were both voted the Scholar Athlete Award by their teammates and both were captains,” he recalled. “Will has big shoes to fill.”

The bulwarks of the defense are senior safety John McGuire and Bahr at end.

“Bahr is a big-time Michigan recruit,” Holecek said. “McGuire is standout at safety, our quarterback on defense. He’s a huge safety (6-2 and 210 pounds). He’s going to be an enforcer back there.”

“I’ve put on about 15 pounds since last year,” McGuire said. “I definitely have a lot of responsibility not only on the field but as a captain. I want to make certain everybody stays accountable, focused and driven.”

Another returnee high on the VIP list is junior extra-point and field goal specialist Mike Baker. As a sophomore he kicked 46 extra points and 10 field goals, the longest of which was a 41-yard attempt into a stiff crosswind with no time remaining that gave the Ramblers a 27-24 victory over Fenwick at Triton College.

If something like that happens in the opener rest assured it will make the ESPN highlight films.

Holecek considers St. Xavier to be one of the strongest opponents on a typically grueling schedule.

“They’re good, they’ve won a lot and they’re from Ohio,” he said. “Watching films, even the bad record teams they played against had good fundamentals. They’re a big school with 1,500 boys, 500 more than us, they’ve got a 15,000-seat stadium and they have a giant endowment.”

St. Xavier opened its season on Friday night (Aug. 19) with a 16-13 loss to another Ohio powerhouse, Lakota West, in the final 21 seconds after holding a 13-point halftime lead.

“We want to challenge the kids,” Specht told Cincinnati TV station WCPO. “That’s the only way you can get better.

“We want them to compete against the best competition we can find. We’re going to travel to Chicago and play arguably the best team in Illinois.”

A national TV audience will be watching on ESPN.