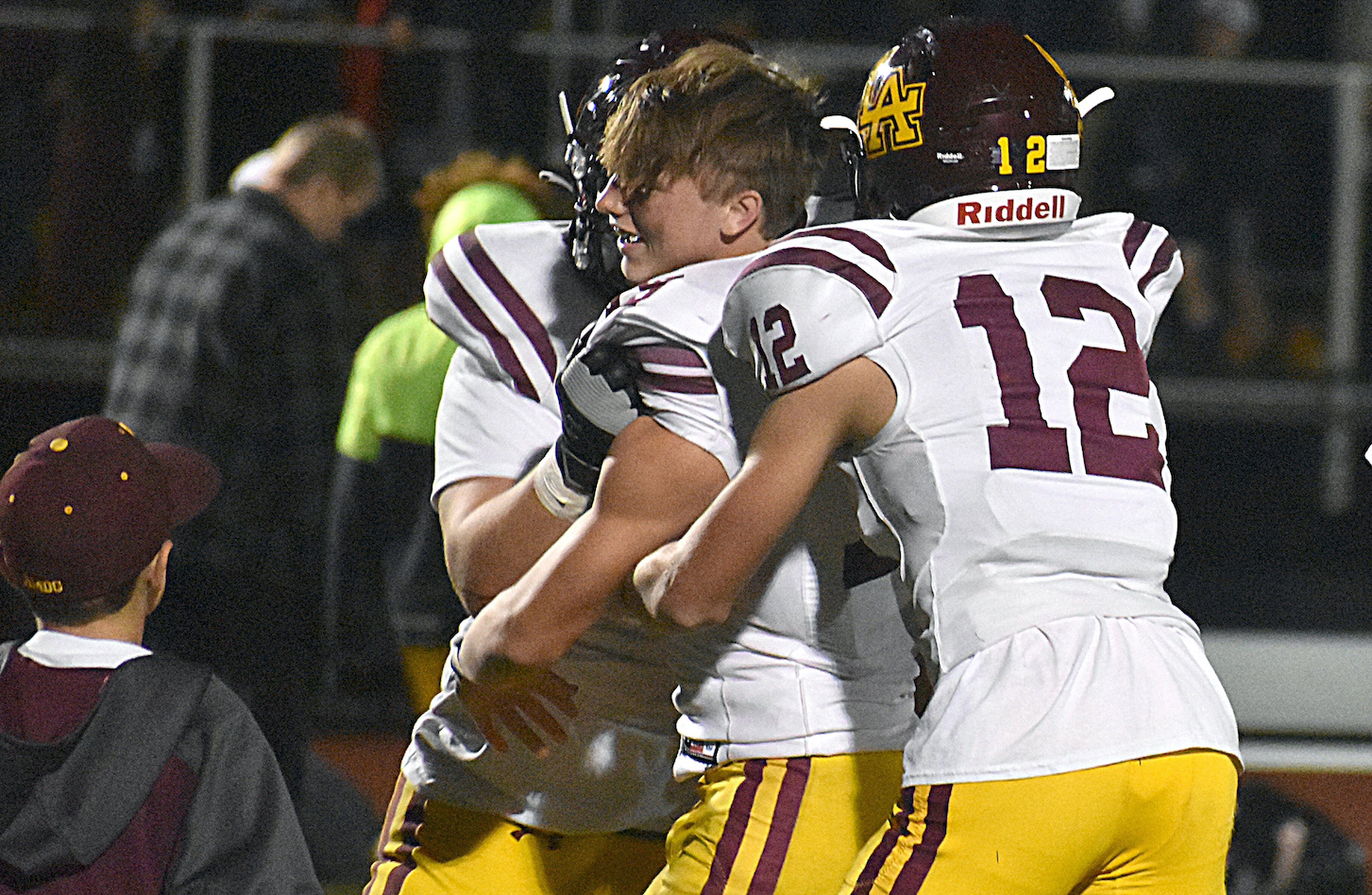 With no time remaining on the scoreboard clock, the entire Loyola Academy football team spontaneously rushed onto the windswept field at Triton College and jubilantly mobbed sophomore kicker Michael Baker.

An instant earlier Baker’s 41-yard field attempt into a stiff crosswind soared between the uprights, giving the undefeated Ramblers a spine-tingling 27-24 victory over Fenwick, squelching a fourth-quarter counterattack by the statistically dominant Friars in the Sept. 24 Catholic League clash.

“He’s a solid athlete, so we trusted him,” coach John Holecek said of Baker. “Confidence — he’s got it.”

The sophomore said he welcomed the opportunity to come through in the clutch even though “I didn’t know I had that range against this wind.”

“With about two minutes left in the game I kind of felt it was coming,” he went on. “I’ve been kicking for a long time and it paid off tonight.

“I was aiming way right because I knew the wind was blowing way (to the left).”

The last of those touchdowns came on a 35-yard interception runback by linebacker Holden Quinn that enabled Loyola to go up 24-10 with 3 minutes 32 seconds to play in the quarter.

Another interception — this one by linebacker James Kruetz on the second Friars’ play after the kickoff that followed Quinn’s TD — was returned 22 yards to the Fenwick 43 and put the Ramblers in excellent position to deliver the knockout blow.

But the Friars’ ended the third quarter with their second goal line stand of the game by stopping the Ramblers on the 1-yard line after halting them on the 4-yard line early in the second quarter.

In the fourth quarter, Fenwick’s passing attack produced two touchdowns that were followed by extra points and the score was tied 24-24 when the Ramblers took possession of the football on their own 20 with 5:30 remaining.

Led by the running and passing of quarterback Jake Stearney and the running of Mike Regan — and aided by a pair of 5-yard Fenwick penalties — the Ramblers managed to penetrate to the home team’s 43-yard line with 16 seconds to play.

Stearney then threw an incompletion on a play that took six seconds off the clock.

With no alternative but to pass again, Stearney found receiver Danny Collins, who made the grab, slid down at the Friars’ 24 and called a timeout with two seconds on the clock, setting the stage for Baker’s difficult game-winning field goal.

“On the sideline I was very scared, obviously a lot of pressure for a sophomore kicker,” admitted Quinn, who added a second interception and blocked punt on the evening. “He did a huge job for us, winning a game (in which) we didn’t play well on either side of the ball.”

“Michael got off the kick but don’t forget about the two other special teams guys who made it possible, Eddie Dreher, the snapper, and Ryan Craddock, the holder,” said Holecek’s assistant Tim Feldheim, who coaches the special teams.

“There’s something to be said for winning a game when you don’t play well but there’s no way I can be happy about how we played,” Holecek lamented.

Compounding his frustration after the narrow victory — which improved the Ramblers’ record to 5-0 and extended their winning streak that dates back to the unblemished spring season to 11 games — was another injury to a key player.

After catching a pass from Stearney on a 7-yard play that put the ball on the Friars’ 43 in the waning seconds, Regan had to be helped off the field because of an injury to his right knee and his status for the Saturday, Oct. 2 home game against Marist is uncertain.

Against Fenwick, Regan was a starter for the first time in his career. He replaced fellow senior Marco Maldonado, the superstar who sustained a broken collarbone the last time he carried the football in the final minute the 46-43 triumph at Brother Rice the previous weekend.

Maldonado carried 38 times for 335 yards in that game, breaking the Loyola single game record, and his four touchdowns gave him 12 for the season.

Regan took over the workhorse role, rushing 32 times for 172 yards, scoring the Ramblers’ second touchdown on a 1-yard run and catching three passes for 19 yards.

“Certainly, he sees the holes well, he’s got the patience and the vision,” Holecek said. “He’s not a home run threat like Marco is every play. He doesn’t have that top end speed that Marco does, but he’s a good running back.”

Holecek also provided an update on Maldonado’s collarbone injury that was first believed to be season-ending: “He’s having surgery early next week.”

Is there a chance he will return?

“It depends how fast the collarbone heals,” Holecek answered. “It might be four weeks, six weeks, eight weeks.”

The injury situation involving Maldonado and Regan probably means an increased emphasis on Stearney’s role in the offense.

The wind gave the junior quarterback problems against Fenwick, a factor in his 9-for-21 passing performance for 72 yards and his first interception of the season.

He also ran for 50 yards and scored the first Loyola touchdown on a 2-yard run, climaxing a 74-yard drive after Fenwick’s Danny Kent’s 69-yard scoring jaunt on the second play of the game had given the Ramblers notice that they were in for a tough game.

With four catches for 19 yards, including the one that prefaced the game-winning field goal, Danny Collins continued to lead the Ramblers in the receiving department.

On defense, Quinn made the biggest impact — preceding his 35-yard interception return for the touchdown was another 19-yard pick that led to Regan’s touchdown.

For Fenwick, which amassed 425 net yards to Loyola’s 332, quarterback Kaden Cobb and running back Kent were in the forefront.

The lefthanded Cobb had 12 completions in 24 throws for 164 yards, and two of Loyola’s three interceptions came after he had to briefly leave the game because of an injury.

He also netted 54 yards in nine rushes, complementing Kent’s 165 yards in 19 carries. Friars’ kicker Iian Ramage also made an impact by kicking all four extra points and a 38-yard field goal that narrowed the Friars’ deficit to 17-10 with 70 seconds to play in the first half.

On the first of the two touchdowns Cobb tossed a pass to Reese behind the line of scrimmage and the recipient then hurled the ball to fellow wide receiver Eian Pugh on a 62-yard touchdown play.

On the Friars’ next possession Cobb was scrambling in the face of heavy pressure when he found Reese in the clear for a 30-yard touchdown pass that was followed by Ramage’s extra point kick that tied the score at 24.

If Fenwick had been able to hold the Ramblers on downs after the ensuing kickoff they would have had a chance to win the game on a touchdown or field goal.

Instead Regan and Stearney led Loyola on the drive downfield that set up Baker’s heroic field goal on the final play of the game.