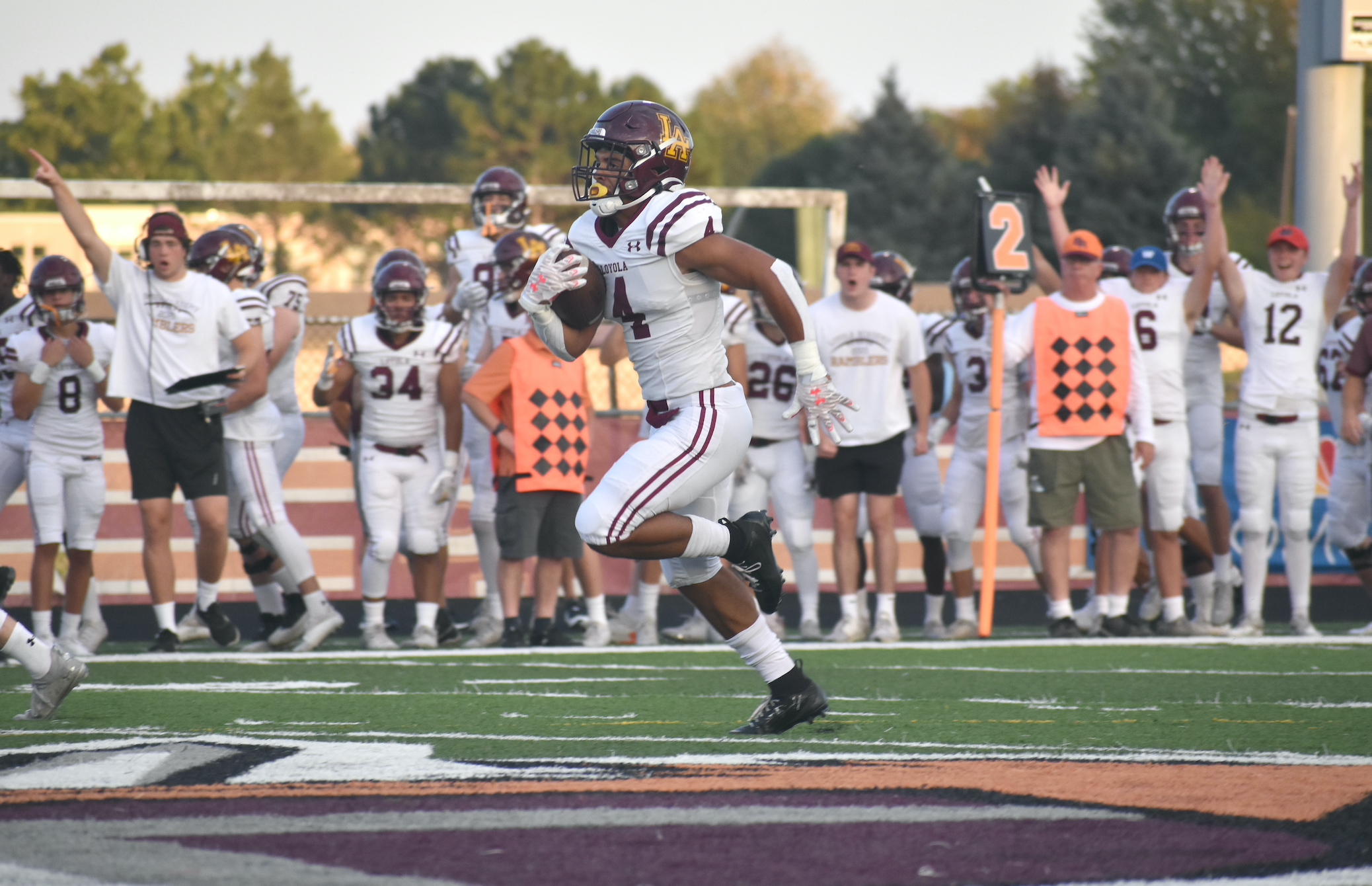 Marco Maldonado refused to let Loyola Academy lose, but after putting on the finest running performance in school history, he probably will be lost for the season because of a collarbone injury he sustained the last time he carried the football in the 46-43 victory at Brother Rice on Friday, Sept. 17.

“We just lost one of the best players in the state,” Ramblers coach John Holecek said. “He broke his collarbone. He’s probably out for the year but it’s not career-ending.”

If this matchup between the Catholic League powerhouses ranked No. 1 and No. 3 in the metropolitan area (Chicago Sun-Times) was the senior running back’s final game of his high school career he gave every indication that he is a potential college star.

In his four games for the top-ranked Ramblers this fall Maldonado amassed 598 yards in 75 rushes. He ran for 12 touchdowns, scored two more on passes and ran for the 2-point conversion, giving him 86 points for the season.

He also was an important component on the Ramblers’ attack the previous two seasons but was overshadowed by the exploits of Vaughn Pemberton, the June graduate now at Ball State University. During the unprecedented and undefeated six-game spring season Pemberton rushed for 904 yards and scored 15 touchdowns.

“Vaughn had so many good ones but I think the game Marco played tonight is the best I’ve seen,” said Holececk, who has coached Loyola since 2006. “This one was special.”

Holecek has been saying all along that Maldonado has a future playing college football and he felt that it was only a matter of time before scholarship offers started coming.

“He got an offer from Eastern Illinois last week,” Holecek revealed. “After this game he should have a ton of offers. (As a runner) he has the patience, the acceleration. He has tremendous (college) potential.”

Maldonado’s 17-yard run with 4:24 remaining wound up as the winning touchdown, giving the Ramblers a 46-36 lead that proved to be insurmountable.

But the Crusaders refused to give up and Jack Lausch led them on a rapid-fire 75-yard drive highlighted by his 50-yard pass to Marty O’Keefe and culminated by his 10-yard touchdown pass to O’Keefe. Jack Welniak’s extra-point kick slashed the deficit to three points with 3:36 to play.

With three timeouts remaining the Crusaders had time to make another counterattack if they could keep the Ramblers from getting a first down and force them to punt.

But Maldonado wasn’t going to let that happen. Starting at his own 20-yard line he carried five straight times, taking the ball to the Brother Rice 45 before he was injured with less than a minute to play.

When the Crusaders did appear to stop the Ramblers, the home team was called for a facemask penalty giving the visitors a first down and the victory.

Because of his injury Maldonado was unavailable for interviews after the game but his performance spoke for itself.

From start to finish he was the most dazzling player in a game that had several stars.

After Brother Rice opened the scoring on Lausch’s 3-yard run that climaxed an 80-yad drive with the game less than two minutes old, Maldonado accounted for all of the yardage when the Ramblers immediately retaliated with a 90-yard drive that ended in spectacular fashion when he went on his 71-yard jaunt.

Later in the opening quarter the Crusaders regained the lead when Lausch went into the end zone from the 1-yard line after his passing and the running of Aaron Vaughn led them on an 80-yard drive.

In the second quarter Loyola quarterback Jake Stearney was in the limelight, going on a 40-yard touchdown run and collaborating with Danny Collins on a 66-yard pass for a touchdown.

However, Lausch’s ‘s 16-yard pass to 6-7 Henry Boyer enabled Brother Rice to tie the score at 21 with 41 seconds to play in the half.

Stearney responded by taking the Ramblers from their own 31 to the Brother Rice 15. Faced with a fourth-and-9 situation, Holecek sent in Mike Baker to attempt and connect on a 33-yard field goal, putting the Ramblers on top 24-21.

They clung to the lead throughout the second half.

“We knew it was going to be a four-quarter 48-minute fight,” Holecek said. “We knew they’re a state (title) contender; we knew how good their quarterback (the Notre Dame recruit Lausch) is. Their running back (Vaughn) is excellent and their tight end (Boyer) is a great weapon.”

In their three previous victories the Ramblers had given up only 28 points. But this time they were rigorously tested. Brother Rice (3-1 with one of the conquests coming via forfeit) amassed 530 yards versus a combined total of 386 for Loyola’s earlier opponents.

“The defense struggled at times but we were there to pick them up,” Stearney said.

The statistics prove his point: with 588 net yards the Ramblers’ attack was even more awesome than that of the Crusaders.

Stearney had 14 completions in 24 attempts for 192 yards and netted 47 yards in 7 rushes. Continuing his fine play, Collins caught six of the passes for 106 yards, while Fitzgerald grabbed six for 72 yards in his best receiving performance of the season and also earned praise from Holecek for his blocking.

“We knew they were a heck of a team,” Fitzgerald said. “Give our offensive linemen credit for opening holes for Marco

“It’s awful to lose Marco but I know we can keep winning.”