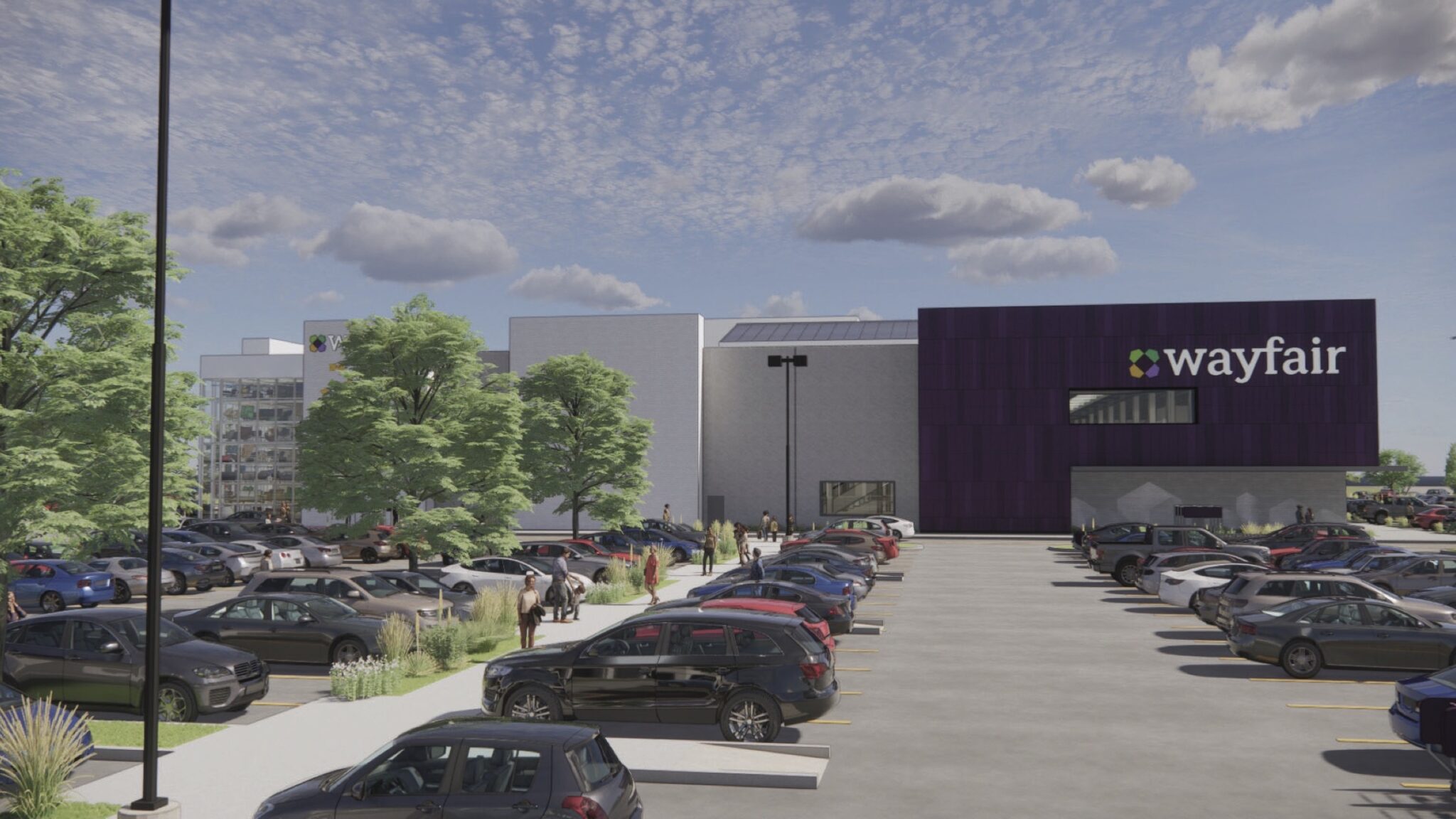 A rendering of the proposed promenade leading to Wayfair's northern side. | Images from Gensler

While work on Wilmette’s groundbreaking Wayfair project has been ongoing, the project returned to the public sphere this week.

The Village of Wilmette’s Appearance Review Commission heard from WS Development on Monday, Jan. 9, when the developers presented updated designs for Wayfair, a home furnishings and decor store that will occupy the former home to Carson Pirie Scott in Edens Plaza.

The Village Board OK’d designs for the box store in March 2022, but developers are requesting relatively minor changes, including a reduction in the size of Wayfair’s signature purple facade on three of the building’s four sides.

“With a project of this scale, there is certainly going to be a refinement of plans especially once they go from conceptual design into more of the construction-document phase, which is what they have been working on since late February, March of 2022,” he said.

In the Wayfair designs, a purple glazed terracotta facade containing the company’s logo covers a portion of all four sides of the building. The terracotta is reduced in size, most significantly on the north and west elevations, as part of the design changes.

The applicant also provided more detail on the north side’s “promenade,” a pathway through the northern parking lot that is complemented by trees, shrubs and other landscaping elements.

The promenade is in part a tool to guide customers to the northern parking lot, where commonly more parking is available.

“When Wayfair initially came before the Village Board, one of the recommendations was to try and find a way to encourage people to use that north parking lot, since there is no longer an entrance to the north,” Sivertsen said.

With that in mind, Appearance Review commissioners asked Wayfair on Monday to rethink its proposed landscaping changes to the building’s north side. Wayfair is requesting to remove a set of trees near the base of the building, but the ARC is concerned about approaching customers staring at a large blank wall, Sivertsen said.

The ARC approved all of the requested changes except the landscaping requests for a portion of the north elevation, and Wayfair will return with designs in response later this year, Sivertsen said.

Wayfair will be taking over the 150,000-square-foot space left vacant by Carson Pirie Scott in 2018. The design plans approved last year call for the demolition of five storefronts to make way for the store’s entryway plaza on the east side of the building.

Boston-based WS Development purchased Edens Plaza in late 2021 and brought Wayfair with it. The firm has promised to renovate the aging plaza, as well as Plaza del Lago, which it purchased in 2022.

Developers told Wilmette officials in 2022 that they hope Wayfair will open in late 2023; though, Sivertsen said that will be a difficult mark to hit and he predicts an opening closer to early 2024. He added that the design changes will not disrupt the developers’ timeline.