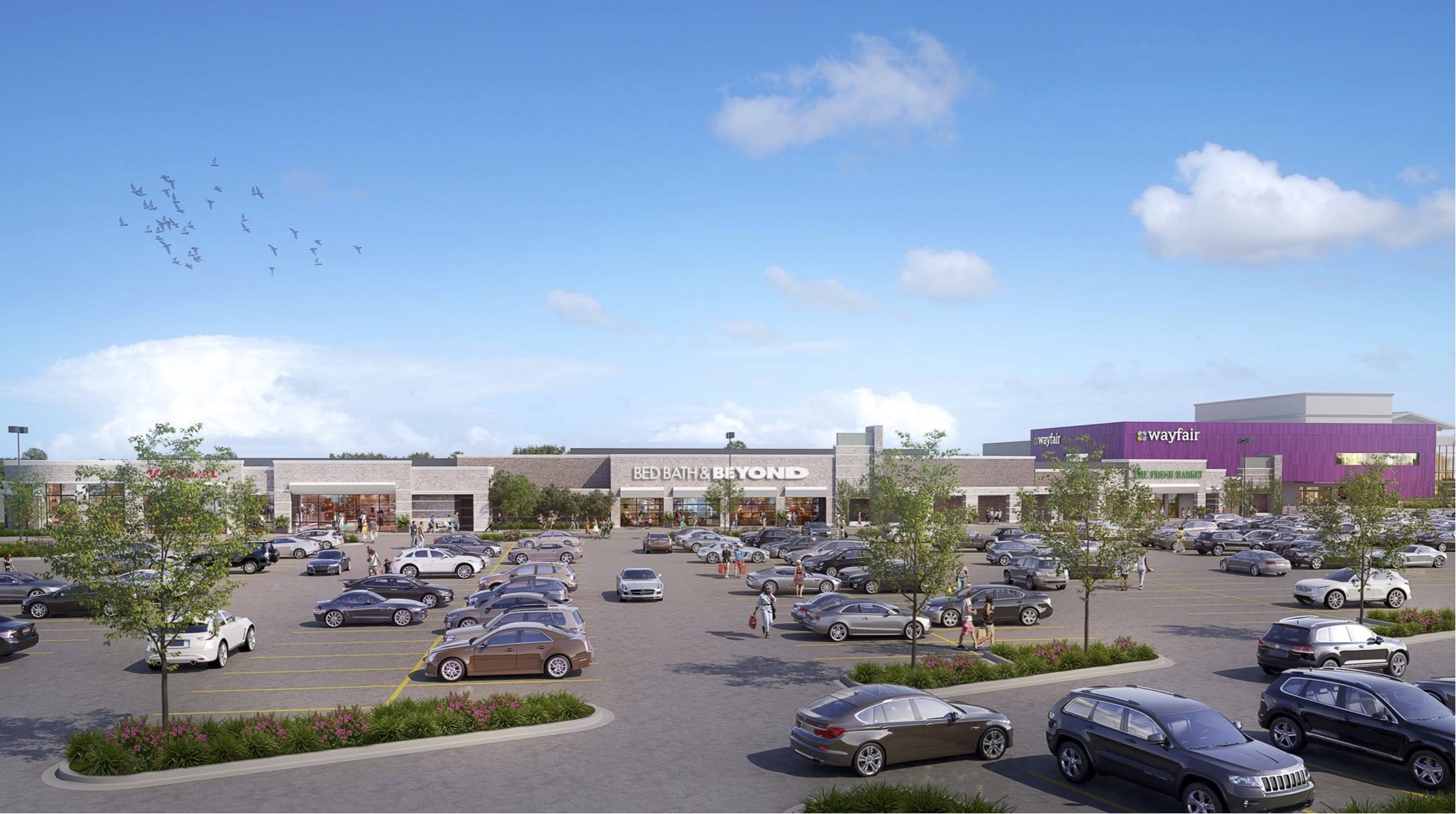 An initial design from WS Development for Wayfair and Edens Plaza, which WS agreed to purchase in a tentative deal in December. | Image by WS Development

A new development firm is coming to town and is bringing its own welcome present.

According to Village of Wilmette documents, WS Development reached a tentative deal in December to purchase Edens Plaza from Newport Capital Partners for an undisclosed sum and Wayfair is along for the ride.

Online-retail giant Wayfair will reportedly open its first brick-and-mortar location by mid-2023 in the former site of Carson Pirie Scott, which abandoned the 150,000-square-foot space in 2018.

Representatives from WS Development and Wayfair will present their initial concepts to the Wilmette Village Board on Tuesday, Jan. 11.

“Filling this strategic space has been a longstanding economic development priority of the Village Board, and we are thrilled that WS Development and Wayfair will help to reinvigorate Edens Plaza,” Village President Senta Plunkett said in a statement. “This is an incredibly exciting opportunity for our community.”

A project by Carson Pirie Scott Co., Edens Plaza debuted in 1956 at the corners of Skokie Boulevard and Lake Avenue in Wilmette. After multiple failed renovation tries, the shopping center was renovated to its current form in 1992.

The plaza has been the subject of much local discussion since Carson’s departure in April 2018. Newport purchased the shopping center and its 335,000 square feet of retail space for $72 million in December of 2018, making it a goal to fill the Carson’s void and revitalize the entire property.

The Village of Wilmette worked closely with Newport with little luck over the past two years to fill Carson’s and other vacancies, as well as modernize the center.

While it carries a 21.7 percent vacancy rate, the center is home to major retailers, such as Walgreens; Bed, Bath & Beyond; and The Fresh Market. More than half of its retail space is occupied by the Carson’s building.

Edens Plaza remains the Village’s largest source of sales-tax revenue at 17 percent of the village total in 2020, a cut that would have equaled around $750,000 in 2020. It is also the largest single source of property-tax dollars. The plaza paid more than $500,000 in property taxes to Wilmette in 2020, according to the Cook County treasurer.

Massachusetts-based WS Development manages more than 100 properties across the country with more in development. Edens Plaza will be the firm’s first project in Illinois, according to its website.

In its presentation to the village, WS Development says it plans to “breathe new life” into Edens Plaza by attracting a diverse retail scene and executing physical improvements, such as lightening the color of the brickwork and adding vertical landscape features.

“It’s a privilege to have the opportunity to bring a first-to-market experience to the community of Wilmette in Wayfair and to help steward the evolution of a place that’s served the community so well and for so long,” WS Vice Chairman Dick Marks said in a statement. “We look forward to working with the Village to position Edens Plaza for its next chapter.”

Wayfair is a digital retailer that was founded as CSN Stores in 2002 in Boston. It specializes in home goods, furnishings and decor. Its shopping website features more than 22 million products and welcomed more than 103 million hits in 2020. In 2021, Wayfair ranked 217 on the Fortune500 list with a market value of $32.6 billion. Its profits in 2020 were $185 million, according to Fortune.

In its presentation to the Village of Wilmette, Wayfair says Edens Plaza “stands out” and its placement within the “incredible community is perfect.”

“We believe Edens Plaza is at a critical intersection and, in many ways, is the entryway into the village,” the Wayfair presentation reads. “Our goal is to create a welcoming retail environment at that intersection that is relevant for your community.”

According to initial renderings, Wayfair’s design will eliminate four neighboring storefronts — occupied by Starbucks, Men’s Wearhouse and Tux, GNC and H Marion Framing Studio — to create an entryway along the store’s east facade.

Much of the proposed building will be wrapped in Wayfair’s trademark purple, including the west side and northwest corner that face the Edens Expressway.

A clerestory, which is a set of windows atop a building, is planned to allow Wayfair’s interior to welcome more natural light.

Wayfair says the new store will create a unique “omnichannel shopping experience that blurs the lines between online and offline and provides each of our customers the tailored experience they desire.”

Precise details of the shopping platform are not clear in the presentation; however, according to a memo to the Village, Wayfair senior counsel Alison Vallot said customers can purchase items at the store and take them with them or have them shipped to any destination, and items can be purchased online and picked up at the store.

According to the village documents, Wayfair has plans to open three physical stores, but the one set for Edens Plaza is the only Wayfair-branded site. The other two will reportedly be smaller and feature Wayfair brands AllModern and Joss & Main, respectively.