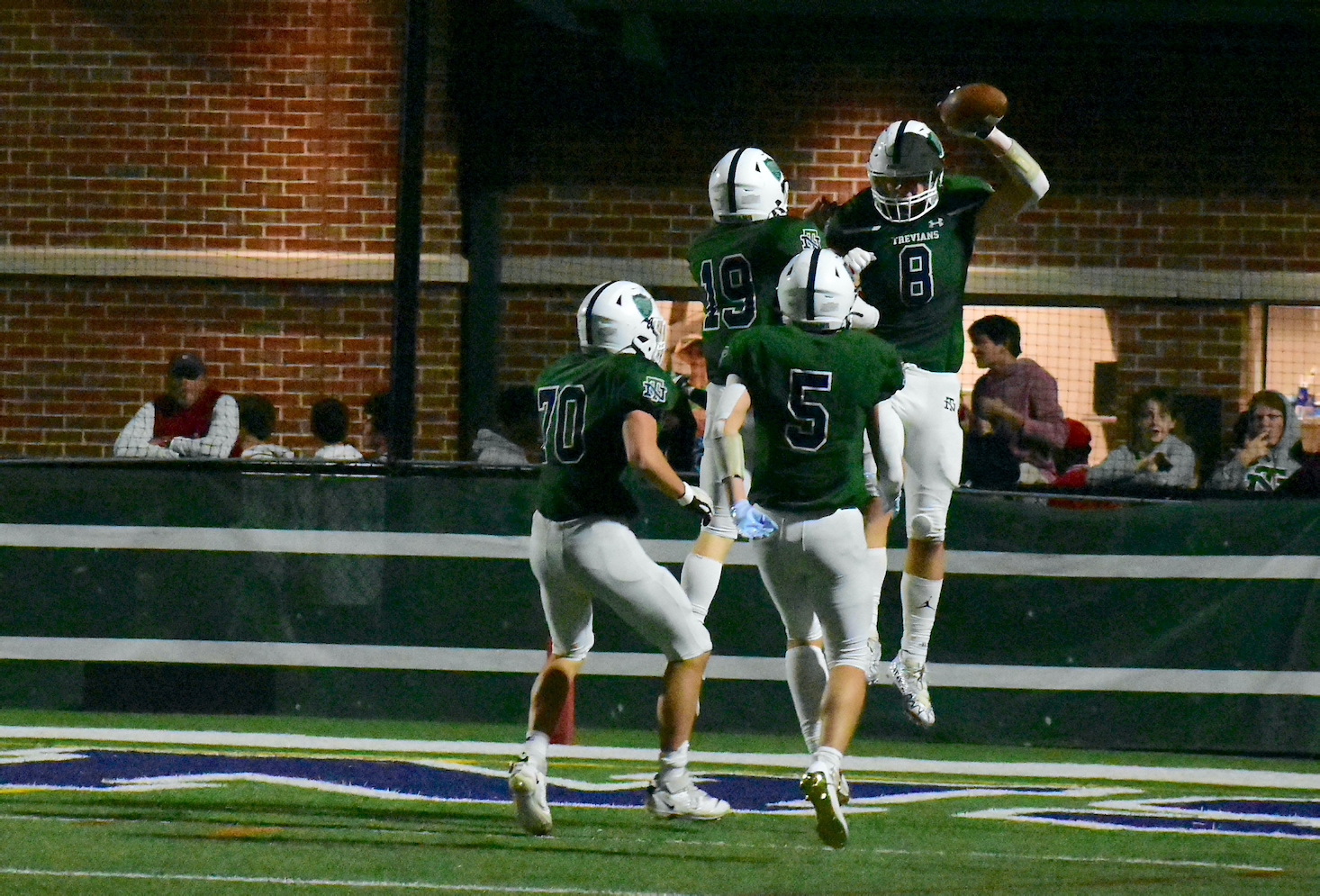 New Trier’s yearly matchup against Evanston is always circled on the team’s schedule. But this year, the game was circled, bolded, underlined and then circled again.

The Wildkits defeated the Trevians for the first time in more than a decade last season, leaving New Trier with a year’s worth of built-up frustration. But the Trevs returned the favor Friday night, making the team’s 12-month wait worth every second.

Behind a strong performance in all three phases, New Trier started its Central Suburban League South slate on the highest of notes, defeating Evanston 17-10 on Friday, Sept. 23, in Northfield.

“When you play Evanston, I think every time it’s fun,” New Trier head coach Brian Doll said. “After last year, and going over there and kind of getting our butts kicked, it was nice to come back tonight and get a win.

“It’s a great rivalry. We talk to our kids all week about the fact that you get to play in this rivalry and it’s special and you play not just for yourselves tonight but you play for all the alumni and the community — and it’s always fun to beat Evanston.”

One week after New Trier parlayed a fast start against Fremd into its first victory, the Trevians again found success by jumping out to an early lead.

Sophomore kicker Niki Dugandzic put New Trier on the board late in the first quarter with a booming 47-yard field goal straight through the uprights. Dugandzic’s boot was set up by a 41-play drive that took just four plays.

The key moment in the series came on the first play when sophomore quarterback Patrick Heneghan connected with junior Miles Cremascoli on a 33-yard completion. New Trier’s dynamic duo was far from done making an impact on the game.

After the Trevians’ defense made a crucial stop on and Evanston fourth-down attempt from inside New Trier’s red zone, Heneghan and Cremascoli connected on a 91-yard touchdown pass up the seam to give the Trevians a 10-0 lead.

Heneghan finished the evening with a season-best 211 passing yards.

Doll said he was “really impressed” by Heneghan’s performance, applauding the “big throws he made in key moments” and mental and physical toughness he displayed.

Evanston answered New Trier’s touchdown with a scoring drive of its own, traveling 63 yards in seven plays to cut the Trevs’ lead to 10-7 before halftime. Quarterback Dylan Goff finished the drive with a 19-yard touchdown run.

Both team’s offenses remained quiet for nearly two quarters. Midway through the fourth quarter, New Trier junior Jackson McCarey — returning to the backfield for the first time — rushed home a 2-yard score to cap a 58-yard drive and bring the Trevs’ lead back to 10 points.

An injury kept McCarey on the sidelines until Week 4, when he played defensive back, and Week 5 was his first carries of the season after gaining more than 500 yards in 2021.

“It was just awesome scoring that touchdown,” McCarey said. “I’ve been waiting for that. I had a tough injury at the beginning of the season. I was just waiting for my moment to come back and make a big play to help the team. I’m just so happy that it was against Evanston … and I’m just so happy it happened.”

“There’s nothing like (the feeling of beating Evanston). We’ve been talking about this game all year. This is our biggest game of the year and to come out here and to beat them … it’s just a great feeling.”

Although New Trier’s offense played a pivotal role in the victory, it was the Trevians’ defense that sealed the win.

The Wildkits brought the game back to within seven points with a 41-yard field goal, and after stopping New Trier’s next series, Evanston drove the ball down to the Trevs’ 22-yard line with two seconds to play.

Cremascoli ended the Wildkits’ hopes for a comeback with an interception on the game’s final play.

“That feeling (of beating Evanston) is so amazing,” Cremascoli said. “The last play, when I was down running to the sidelines after the interception, it was an experience like none other. I’ve never felt that before. I don’t even know how to describe it in words. It was so great, especially with the game being so close.”

In addition to his heroics on defense, Cremascoli once again shined on the offensive side of the ball. He finished the night with five receptions and 136 receiving yards and the touchdown — his fourth of the season.

“Miles has just been special,” Doll said. “We’ve said it all year long. We knew he was going to be great and he just continues to impress.

“Once again tonight, we saw the little things he does like the 5-yard hitch he turned into a 12-yard gain to get us a first down on third-and-5. Those are as big of plays in games like this as the touchdown because you have to keep moving the chains and moving the clock when you’re up in that spot.”

New Trier’s Jackson Ochsenhirt also intercepted a pass in the game, and the team’s defense generated multiple fourth-down stops throughout the night.

“I was really really impressed on all the fourth-down stops,” Doll said. “Overall, it was just an awesome effort (on defense).”

The Trevs will hope to build on their midseason progress and will look to extend their modest two-game win streak next week against Glenbrook North in Northbrook.

“From Week 1 until now, we’re totally different,” Doll said. “Credit to our staff and credit to the kids for buying in and not giving up after the 0-3 start. I think we’re moving in the right direction.”