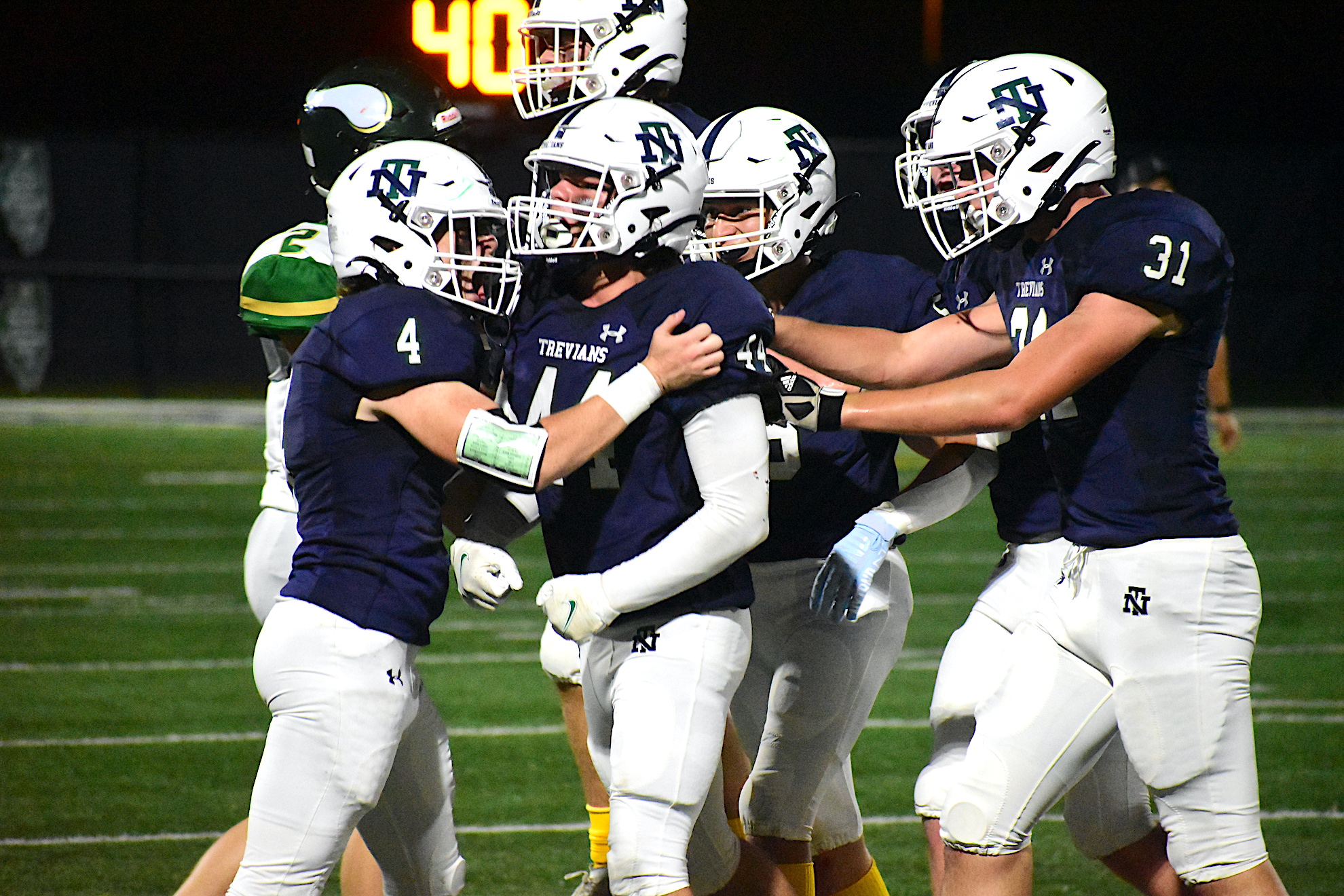 New Trier prepares for each of its games by setting three weekly goals. After just two offensive possessions in their Week 4 contest, the Trevians crossed off the top priority on their checklist.

A renewed rushing attack spearheaded two early touchdowns to fulfill the team’s No. 1 goal of starting fast in search of their first victory, and New Trier added a third, unanswered first-half score en route to a 35-7 win against visiting Fremd (0-4) on Thursday, Sept. 15, in Northfield.

New Trier (1-3) opened the game by driving 67 yards on just six plays. Senior Charlie Blankstein rushed in a 4-yard touchdown to get the Trevs off and running, giving them an early lead that they never surrendered.

“It’s great to get the first (win),” New Trier head coach Brian Doll said. “Obviously, we’ve had a rough start to the season, but this is a really solid win in a lot of different aspects tonight.

“We came out strong tonight. The first drive, taking it all the way down the field and scoring, was a really (great start).”

Doll added that he decided to slightly shift the team’s early-game strategy this week. The Trevians typically defer receiving the ball until the second half, but Doll and the team’s coaching staff decided tonight was the right night to receive the opening kickoff.

“I decided tonight that we’re just going to take the ball and see what happens, and it got us kind of going,” he said.

Quarterback Patrick Heneghan kept New Trier’s offense rolling by leading the Trevians to a 70-yard scoring drive on its second series. Heneghan accounted for 68 yards of offense on the drive (35 rushing, 33 passing), capping the series with an 11-yard touchdown run.

“We started off strong tonight and that is what we preached the whole week,” Heneghan said. “We came out, we shoved the ball down their throats and I think we did a great job with coming out strong tonight.”

New Trier dug into its bag of tricks for its third score of the half.

The Trevians lined up in punt formation on a fourth-and-5 play, but the snap went directly to junior standout Miles Cremascoli, who then ran in a 51-yard score that gave New Trier a 21-0 lead.

Heneghan accounted for the Trevians’ fourth score when he rushed in a 1-yard run on third-and-goal in the final quarter. The sophomore finished the night with more than 150 yards of total offense — and his first career victory as the team’s varsity starter.

“It feels awesome (getting that first win), but this is just a building block,” Heneghan said. “We said this week that each man on the field has to do their job. I’m so proud of everyone on this team. We worked our butts off this week and it showed.”

New Trier’s defense was also a crucial part of the victory. The unit forced four turnovers, all of which were interceptions. Jackson McCarey, Cremascoli, Jackson Ochsenhirt and Evan Hallermann had a pick apiece. Hallermann returned his for a 26-yard touchdown, giving New Trier its final score of the night.

“It’s a huge boost when you get one or two turnovers, but to win the turnover battle by that much, and to score on a turnover, is a big deal,” Doll said. “Any momentum they seemed to build after a first down or a couple plays, we were able to take away with turnovers.”

The Trevians will don their special alternate green jerseys for the signature matchup as they look to avenge a lopsided 2021 loss to the Wildkits, who are 1-3 on the season with losses to Barrington, Prospect and Libertyville.

“It’s one of the greatest rivalries in high school sports with Evanston and New Trier,” Doll said. “It’s always going to be electric.”