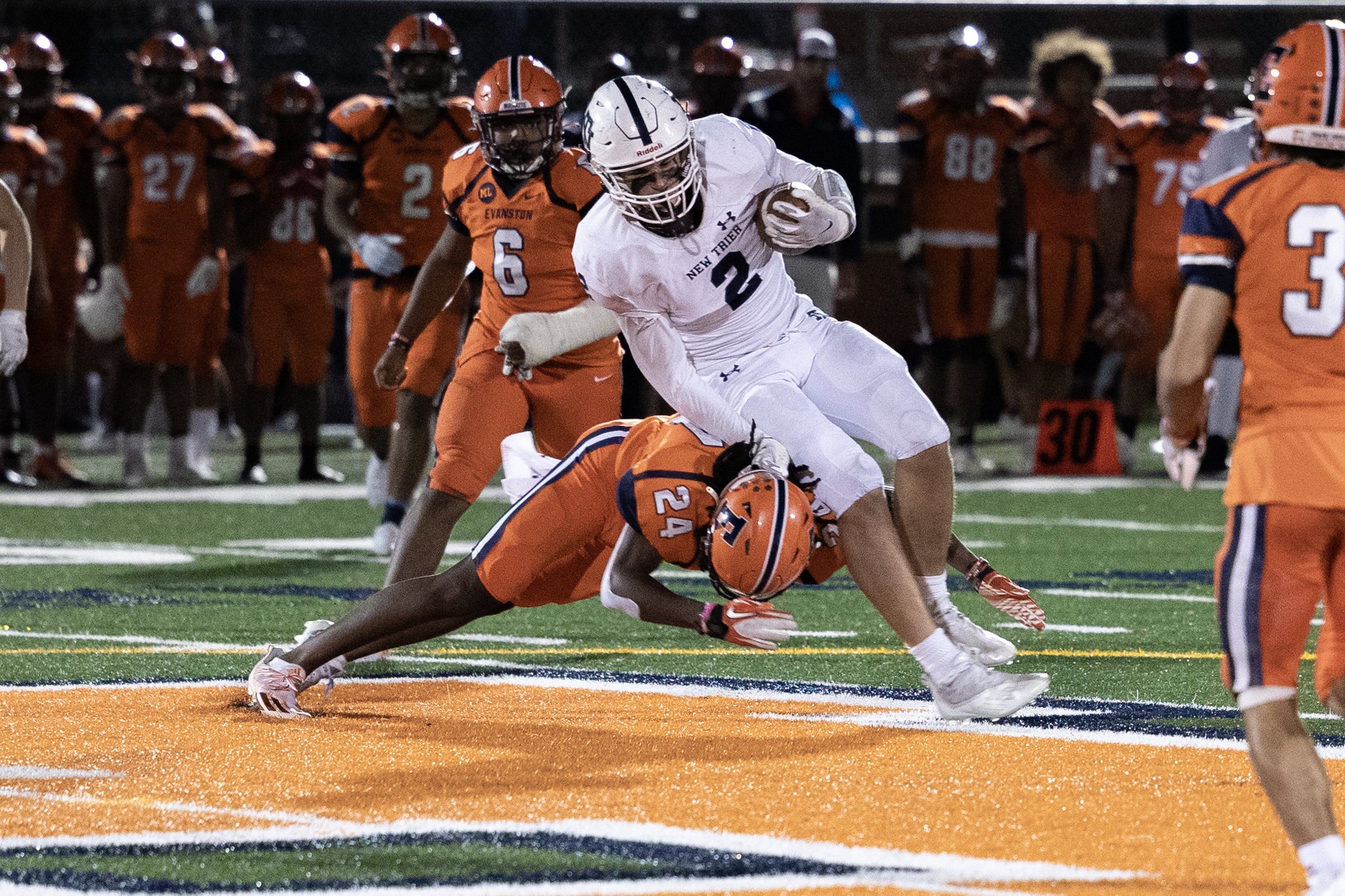 New Trier tight end Finn Cohan is brought down by an Evanston defender during the Wildkits' 38-24 victory over the Trevians on Friday, Sept. 24, in Evanston. | Rob Lange photography

New Trier’s thrilling win over Evanston in the spring football season was one of the program’s most memorable victories ever. But six months later, the Trevians are eager to forget the latest chapter authored in the classic North Shore rivalry.

The Wildkits celebrated their homecoming night in grand fashion, handing the Trevians a convincing 38-24 defeat in the opening week of Central Suburban League South conference play on Friday, Sept. 24, in Evanston.

“I just think we played badly,” New Trier coach Brian Doll said. “Everything kind of went south for us tonight in the first half. The first half really put us in a hole that it was going to be hard to get out of.”

New Trier got off to a nightmarish start as the Trevians opened the contest with a three-and-out drive before surrendering a 52-yard touchdown pass on Evanston’s first offensive play of the game.

The Wildkits led the game from start to finish and never allowed New Trier to trim their lead to fewer than seven points.

“Credit to them; they found a way to outplay us tonight,” Doll said. “It started off really rough with that first play for them. We went three and out and then, wham, they throw a bomb and it opened up the game right away.”

Evanston extended its lead to 14-0 on the first play of the second quarter when its offense finished off a five-play, 77-yard drive with an 11-yard touchdown.

New Trier’s offense was quiet for much of the first half until the Trevians answered Evanston’s score with a 76-yard drive, trimming Evanston’s lead to seven points. Senior quarterback Nevan Cremascoli fired a 7-yard touchdown pass to tight end Finn Cohan to cap the scoring series.

Evanston wasted no time responding, though.

The ‘Kits two-way star Sebastian Cheeks, who is one of the state’s top-ranked players, scored his first of two touchdowns on the night with a 49-yard run. The University of North Carolina commit returned to a prominent role in Evanston’s offense after being sidelined due to injury earlier this season.

A 24-yard field goal from Evanston extended its lead to 24-7 right before the first half expired.

New Trier scored 17 points and racked up more than 225 yards of offense in the second half but the Wildkits tallied 14 points of their own to keep the Trevians outside of striking distance.

Evanston scored three times on plays off more than 40 yards as the Wildkits’ offense was a thorn in New Trier’s side all night long.

Through five games, the Trevians have held just one opponent to under 20 points — a stark contrast for a defense that only allowed more than 14 points once in the abbreviated spring campaign.

“It’s tough right now; there’s growing pains with the defense,” Doll said. “Week 5, you’d hope you’d be a little bit more over the edge in that and we’re not yet. You keep battling and we’re going to see what we’re made of after this loss.

Evanston’s Week 5 win is the first time the Wildkits have defeated New Trier under the leadership of Doll, who called the loss “an ugly game.”

“It stings a lot. It’s the first time I’ve ever lost to them as coach in any way, shape or form in over 20 years of coaching,” Doll said. “ … I’ve never been on this side of it. I’ll have to wake up tomorrow and it will be a different feeling than I’ve had for a long time.”

Although New Trier’s second-half flurry proved to be too little, too late, the Trevians offense ended on a positive note after starting slowly.

The Trevians (3-2) will return home next Friday night for a homecoming matchup with Glenbrook North (2-3). The Week 6 game is a pivotal contest for the Trevians, who will face undefeated Glenbrook South (5-0) in Glenview in two weeks.

“I think the main thing for us is (the team) is going to have to spend some time thinking about what type of team they want to be, how they want to be remembered and how we’re going to move forward for these next four conference games,” Doll said.