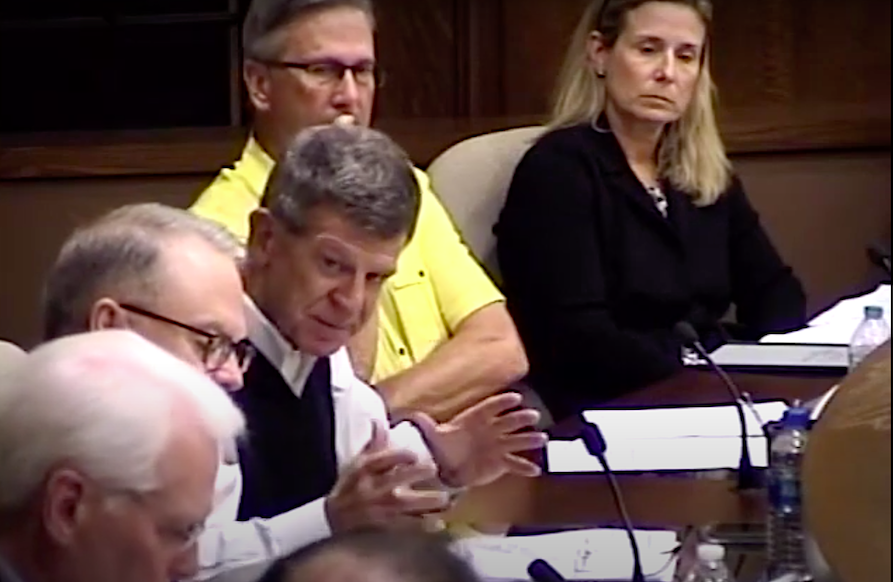 Bob Dearborn speaks to his councilmates during the Winnetka Village Council meeting on Tuesday, Sept. 20. | Image from meeting recording

Just like its neighbors to the north and south, the Village of Winnetka is officially urging stronger state and federal gun legislation thanks to a council decision this week.

But it took a bit more doing for Winnetka council members to agree.

Newly appointed board member Kim Handler motioned to table the discussion, saying more public input was warranted, but her peers disagreed on Tuesday, Sept. 20, voting down her motion before amending and passing the call-to-action resolution.

“Sometimes you just have to move,” Village President Chris Rintz said. “And this is one of those times.”

Handler argued that since the resolution was made public on Friday, Sept. 16, many in the community may not have had time to review it. The resolution, however, was developed on the heels of a well-promoted special listening session on gun violence from the Village Council on Aug. 9, when the public was invited to provide feedback to the board on the topic.

Rintz said he invited — to no avail — officials from the National Rifle Association and other firearm groups to attend the listening session.

Handler’s final attempt to delay the vote in lieu of more feedback sparked an outburst from the audience, with one guest saying, “We’re here,” which Rintz quickly shut down.

The council then collaborated to amend the resolution, similar versions of which were passed in Highland Park, Glencoe and Wilmette over the past two months. Council members, at Handler’s request, agreed to remove references of assault rifles as combat weapons.

The resolution, among other things, urges lawmakers to ban assault weapons and high-capacity magazines, improve the identification and disarming of dangerous individuals, and enact stronger regulations relating to firearm storage.

Rintz commended the council on uniting to pass the resolution.

“I give you guys a lot of credit,” he said. “This is a really, really difficult subject and people have a lot of different opinions.

“I think we have something very reflective of the complete conscious of the community.”

Passing the resolution is not the end of the gun-safety conversation for local Winnetka government.

During the listening session, Rintz and the council promised to consider measures — informed by ideas and feedback from community members — that it could pass to mitigate gun violence.

The continuation of that discussion, for which no date is set, was confirmed by Rintz and will involve Village staff’s and counsel’s thoughts on what is possible to amend in the Village code.

“Follow up here — a review of our (village) code — is mission critical,” council member John Swierk said. “The final version of this (resolution) will be dispense in full transparency to the community … and we are going to have a follow-up session and we invite everyone and anyone to come to that session.”