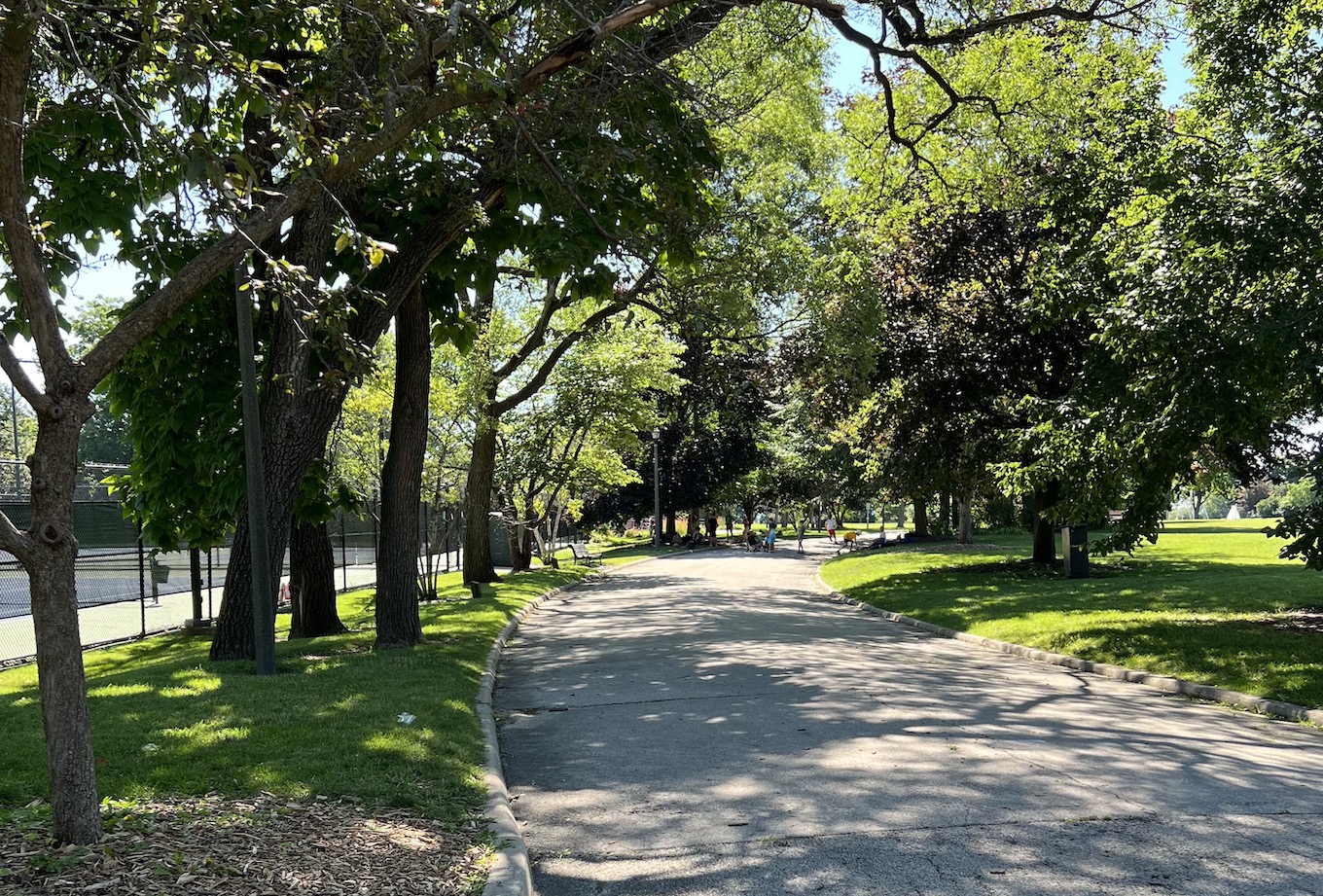 Middle Drive runs through the east end of the park, around the tennis courts and playground. | Photo from Wilmette Park District

Wilmette park commissioners provided some clarity Monday night on the direction of Gillson Park improvements that have been discussed for two years.

After reviewing the results from the most recent park district survey, the Park Board unanimously sided with respondents (39.7% of 1,563) who wish to convert Middle Drive to a multipurpose path through the park.

“I was thrilled to see this came out of the survey as the most favored,” Commissioner Ali Frazier said. “Speaking and walking with residents, having a roadway by a playground was a big concern. The safety of pedestrians traversing the park was a concern. This addresses that.”

Frazier’s sentiment was echoed by her board counterparts, who also touted the additional greenspace that will be added to Gillson Park if 20-foot-wide Middle Drive becomes a 10-foot (or slimmer) multi-use path.

An official vote was not taken at the Park Board meeting Monday, Sept. 12, but commissioners signaled to park district staff to begin gathering information from consultants and architects for the roadway’s conversion.

Middle Drive winds from the end of Harbor Drive near the beachfront westward through Gillson Park and adjacent to the playground and tennis courts, ending near the Lakeview Center. It is no longer an active roadway; though, as Commissioner Julia Goebel pointed out, motorists at times access the road when they get confused driving through Gillson Park. The park district also occasionally designates Middle Drive as extra parking space during special events.

“I don’t know why Middle Drive is there,” Commissioner Cecilia Clarke said. “I see no purpose for it and especially not as a 20-foot roadway.”

A master plan for Gillson Park was developed in 2020. Early resident feedback, however, was clear in its opposition to major changes or additions to the park.

Throughout 2021, the park district whittled down the plan to prioritize infrastructure fixes and minor updates, including new concepts for Middle and Upper drives.

A survey released earlier this summer, aside from demographic questions, only asked residents about the future of the through roads. And out of 1,563 park users, 620 (or $39.7%) favored the conversion. The second largest bulk of responses favored none of the options.

Clarke said the responses showed her that two-thirds of respondents — a combination of those who selected one of the three concepts — wished for a change to at least Middle Drive.

Seeing the results, Commissioner Patrick Duffy was ready “to start moving forward” and asked about next steps.

Executive Director Steve Wilson said the district will work with consultants on a plan and present it to the board at future meetings. If the board moves forward with the replacement of Middle Drive, Wilson said construction could begin around Labor Day of 2023 and finish prior to the summer of 2024.