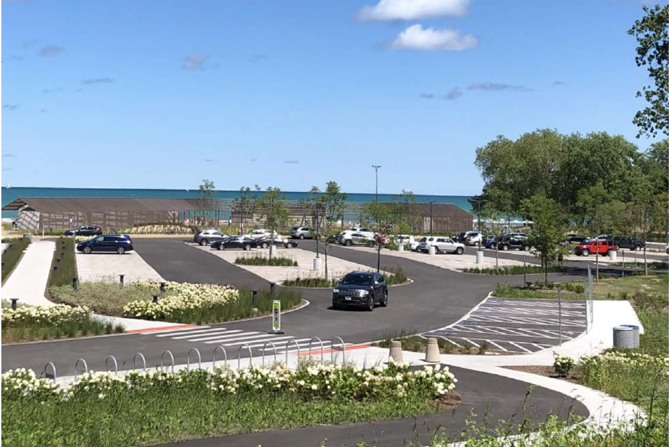 Discussions related to the historic lakeside park are continually intensifying as the Wilmette Park District develops a comprehensive master plan designed to identify both short- and long-term improvements at Gillson.

Park district officials are organizing a plan for the 60-acre park in three phases: analysis, engagement and envision.

Work in the first stage, the majority of which was completed in late 2020 and early 2021, included extensive reviews of the current issues facing Gillson and the potential opportunities to address the areas of concern.

An outcome was a draft “state of the park” report presented to park district officials in late 2020. That document focused on five specific areas of Gillson and coinciding potential improvements.

(Editor’s note: Consultants presented the Wilmette Park Board with dozens of preliminary Gillson Park observations related to each of the above areas. Those observations, which were only presented in a draft format, can be found starting on page 37 of the park board’s Dec. 14 meeting packet.)

Plan development efforts are now firmly in the engagement phase, as both park officials and representatives from The Lakota Group — the consulting firm working to construct the vision plan — are collecting community and stakeholder feedback.

“To date, we’ve held multiple stakeholder meetings with different user groups of the park as well as different entities and neighbors that are in close proximity to the park,” said Steve Wilson, executive director of the Wilmette Park District.

Members of the consulting team are working on additional thoughts and concepts from that event to bring back to staff and the park board for additional review, Wilson said, adding that officials hope to bring back updated concepts to the public in early May.

The park district is still in the early stages of developing concepts, Wilson said, and no specific plans for improvements at Gillson are yet set.

Officials are currently hoping to have the master plan finished in the early summer months. An estimated timeframe presented at the park board’s March meeting suggested June as a completion date.

If the plan were completed then, it would allow the park district to begin infrastructure work as soon as late 2021 — if that is an identified priority in the plan.

“We would like to get going on the infrastructure if that is truly what we end up prioritizing at the end of all this,” Wilson said. “We would like to get going on that at the end of the summer season. So to know what your plan is so that you can plan to execute … so you can actually do the work once the season concludes would be the goal. But at the same time, we don’t want to artificially rush the process. We want to make sure that we hear everybody and develop something that most people can get behind and move forward from there.”

If preliminary feedback from Wilmette residents, vested stakeholders and local officials is any indication, drastic changes to the beloved park are not in store.

“What we’re really hearing right now from people is that they love (Gillson),” Wilson said, “and “they’re not looking for major changes. They’re looking for the things that need to be improved such as roads and sewers, separating pedestrians out of the roadways. … That is what people want us to focus on, which aligns with what we thought we had to focus on, which is great.”

During the park board’s March meeting, commissioner Bryan Abbott said the community’s response “has been really interesting and kind of wonderful.”

Abbott added that the board is listening and will do what’s best for Gillson.

He also summarized the early rounds of feedback as the community signaling that it’s not looking for “radical changes” at Gillson, but he does expect some compelling improvements.

“Although I don’t expect radical changes I have come to expect some interesting and delightful enhancements,” he said.

Wilson described the process of developing a comprehensive plan for Gillson as a “balancing act” because of the varying ways people utilize the park and the desired goals they have for it.

“To come up with a concept that everyone likes every aspect of, for such a big park, is a challenge and that is why we’ve been talking about it so long and that’s why we’ve hired in the team that we’ve hired in. (They are) very successful planners and we look forward to hearing how they distill the feedback and come back with suggestions.”

Deliberations around updates at Gillson have been ongoing for more than a decade, but this is the first time the word comprehensive can be attached to the planning process, Wilson said.

A previous comprehensive plan for the park asked voters in 2015 to allow funding for its execution; however, about 64 percent voted against the $12.7 million referendum that was set to fund an expanded beach house and Lakeview Center, ADA-required additions and more.

Following that denial, park officials conducted a communitywide survey to gauge residents’ interest in the components included in the failed comprehensive plan.

Park Board members determined it should focus on the beach house and surrounding parking lot projects, which were completed in 2019.

With that project now finished, officials then decided to again embark on developing a plan that would serve the entire whole park, not just one area.

Wilson said the park district feels it is in a good financial position right now, but added it’s difficult to forecast potential costs because the overall scope of work is still ambiguous.

As the process progresses, Wilson and park officials will continue to seek community input.

“Our planning is just simply better with as much public participation throughout the entire process,” he said. “I encourage people to continue to stay engaged and continue to give us their input at every step of the way because that will lead to a better final product.”

The Record is a nonprofit, reader-funded news site. Our public-service journalism, including most coverage of public funds, is free for all to read.