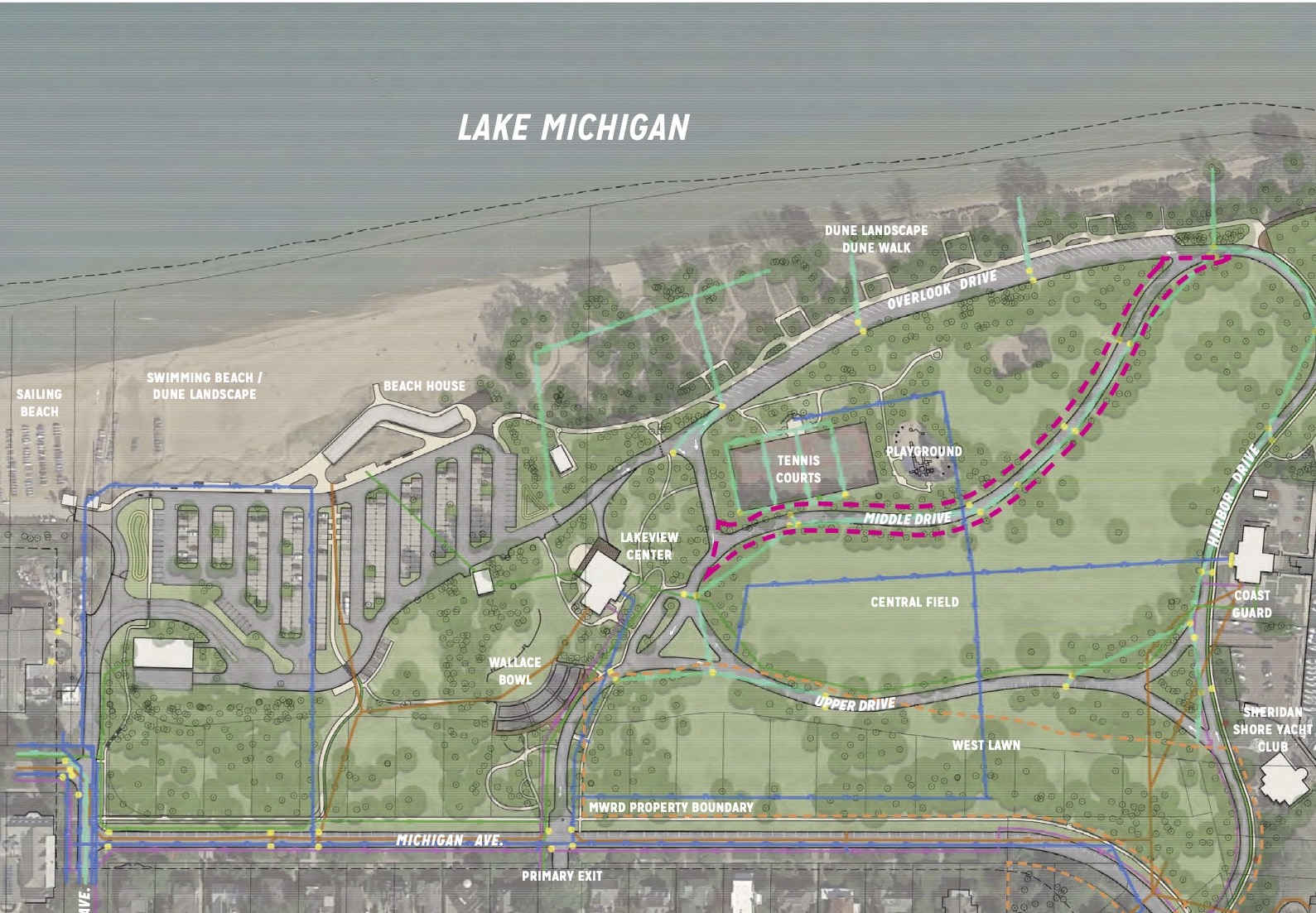 Wilmette park commissioners are going back to the community, but this time with a more specific questions:

What should happen to two existing roadways within Gillson Park?

At the Park Board’s regular meeting on Monday, Dec. 13, commissioners directed the Gillson plan consultants to get their thoughts on the fate of Middle and Upper drives as the park district plans the future of its flagship park.

It is unclear exactly when and how the opinions will be collected.

The roads have been the source of many of the comments directed toward the board during the planning process, with many community members hoping for minimal changes to Gillson.

The board’s directive followed a cost-analysis presentation from Andy Tinucci, principal at Woodhouse Tinucci Architects. Tinucci said the cost of keeping and repairing Middle Drive, including the stormwater infrastructure
beneath it, would be approximately $900,000; the cost of removing Middle Drive and returning it to parkland, is estimated at $680,000; and the option to repair Middle Drive and remodel it as a 12-foot pedestrian walkwaywould be around $800,000.

As for Upper Drive, Tinucci shared cost estimates to repair Upper Drive ($980,000); remove the road entirely ($775,000); remove both the road and the infrastructure and replaced it with a sidewalk ($975,000); and relocate the road off land owned by the Metropolitan Water Reclamation District ($1.3 million).

After hearing from nine residents during public comment, the Park Board spent more than an hour discussing the next steps. Commissioner Allison Frazier said she believes that if Upper Drive is removed, it will provide more opportunities for green space. She also said that safety continues to be her No. 1 concern, especially as the parent of young children.

She also said that if it’s ultimately decided to keep Middle Drive and turn it into a pedestrian walkway, she would like to see a paved surface, as anything else would be a challenge to navigate, especially to families with children in strollers.

Commissioner Cecilia Clarke brought up that all five design plans that had previously been presented to the commissioners say that Middle Drive is used for parking; however, she said she has never noticed anybody parking there in recent years.

She also believes that Middle Drive should be removed.

“I do not really see the purpose of Middle Drive,” Clarke said. “I do walk it as well, and I can understand having a walkway there, but do we need a 20-foot walkway with curbs for pedestrians?”

Clarke added that she believes Upper Drive is fine where it is and does not believe it should be relocated.

“I don’t see the advantages to that,” she said.

Kosloskus, who suggested the community weigh in on all the options for both roads, said she wants to keep the historical design of the park in mind when deciding what to do.

“We’ve received several emails about preserving the spirit of the design, and I do appreciate that,” she said.

She added that she would be in favor of relocating Upper Drive so that the Wilmette Park District can maintain the entirety of the road, but only if the MWRD is on board.

“I would hope that’s only a benefit to them and we’re not intruding on their property on a regular daily basis,” she said. “If that were to vet out, then I would be comfortable with that plan.”

Kosloskus also stressed to the community that any tree that is torn down during this process will be replaced, and Board President Mike Murdock added that money is already budgeted for new trees.

Looking ahead, Commissioner Patrick Duffy said that if Upper Drive is moved the park’s entrance should be reconfigured.

“If we move Upper Drive, it would make sense to move the entryway, just to create more space off of Michigan Avenue,” he said, adding that there is a chance, if they do that, it would cause some initial backups on the road while visitors get used to the reconfiguration.

He also said that as plans continue to move forward, people will start to see more plants throughout the park.

“As we move towards the overall landscape plans for the park and we also start coordinating with the memorial tree program, there will be a lot more plantings going on over time,” Duffy said. “I have confidence the beautification of the park will begin to take shape.”

Commissioner Lindsay Anderson said she understands the concerns about environmental impacts and
believes there are ways to make changes but not impact too many trees.

She also believes redoing Middle Drive as a pedestrian walkway would be popular with the community.

“A pathway there free of cars would be an asset to families,” she said. “It’s something that I know would be utilized.”

Board Vice President Julia Goebel said she would be in favor of turning Middle Drive into a walking path and removing Upper Drive. She also said that parking needs to be a concern, not just for Gillson, but the community as well.

“If we took out all of these roads, it could lead to more people seeking street parking in the neighborhood,” Goebel said. “One of the unintended consequences is that people who can’t find parking in Gillson circulate” throughout the area.

Goebel also said that she knows this process has been taking a lengthy amount of time, but it’s important that they make sure everything is done correctly.

“I think it’s been worth taking the time to do these things thoughtfully,” she said.

The board began reviewing initial Gillson Park concepts at the end of 2020 with hopes of final plans in the summer of 2021. In August, a new goal was set for the end of the year.

Murdock, the board president, said he would like to see a park less focused on vehicles and more focused on pedestrians. He said that when the park was initially built, cars and vehicles were a new commodity and everyone would drive to the beach. Today, he feels more people would be interested in walking to the beach.

He is not in favor of redoing Upper Drive if part of it remains on property not owned by the Park District.

“For me, it just simply doesn’t make any sense to rebuild this road where it is,” he said. “It’s basically going to cost us $1 million to rebuild it as is and $1.3 million to relocate it slightly so it’s no longer on MWRD property.”

He added that’s it’s “incredibly irresponsible to spend a million on an asset we don’t own.”