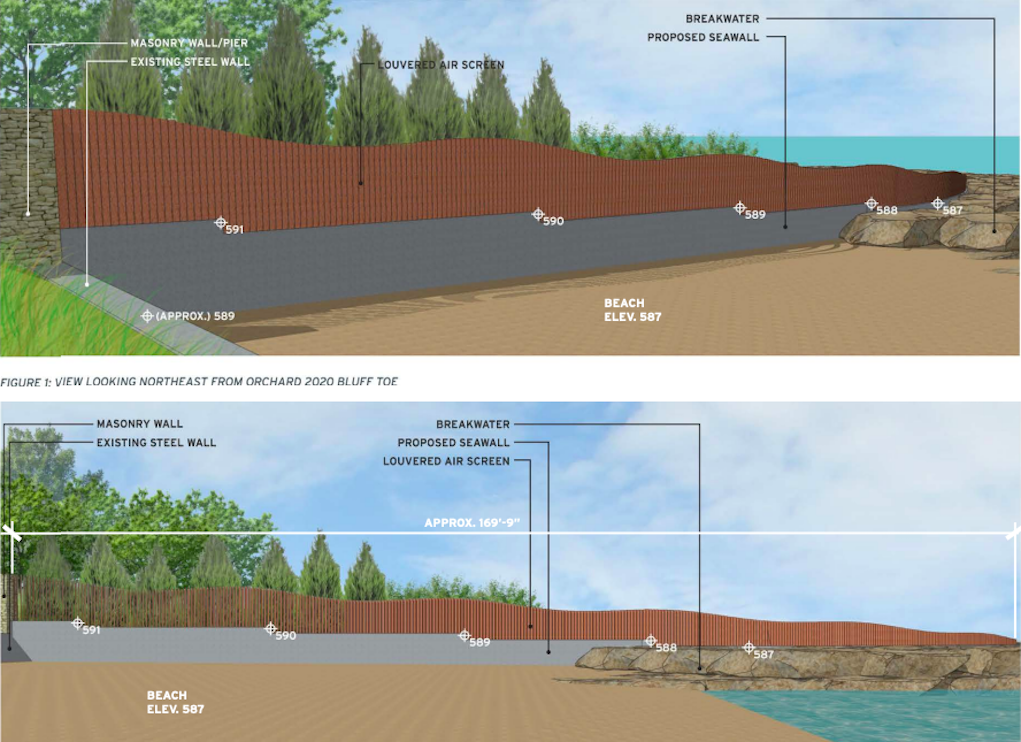 Over the past two months, Winnetka residents and public officials have lambasted a Winnetka Park District plan to combine Elder and Centennial beaches.

The tension came to a head Thursday, June 9, when park commissioners voted 3-2 to withdraw the plans from consideration from state and federal authorities.

The decision came at the end of a 3 1/2-hour Park Board meeting, in which residents not only provided 90 minutes of public commentary but also consistently spoke out during the commissioners’ discussion and presentation.

For the second time in a month, Commissioner Colleen Root motioned to pull the permit. During a March meeting, Root’s motion received no second, but on Thursday — after the board received a plethora of negative feedback, including a petition signed by 1,400 Winnetkans and unanimous objection from Winnetka trustees — the motion received a second from Cynthia Rapp.

The two voted with David Seaman in favor of the withdrawal. Board President Warren James and Mickey Archambault were against the measure, and Vice President Christina Codo and Eric Lussen were absent.

The meeting featured several heated exchanges as James, as well as board counsel Steven Adams, attempted numerous times to convince the board to either table the discussion or adjourn to closed session. In his final attempt, James pleaded for commissioners to grant him an opportunity to speak to them in executive session and introduced a motion to do so. It was denied 3-2.

“I am not going to grant you that,” Seaman said. “We’ve spent so much time in executive session. The public has spoken.”

The combined beachfront has long been a goal of the Winnetka Park District and reached a major turning point in late 2020 when park officials reached a tentative agreement to acquire the property, 261 Sheridan Road, in between Elder and Centennial beaches.

Negotiations to finalize the deal with the property’s owner — identified as Orchard 2020 Trust — have been ongoing ever since. At the same time, park officials have continued to develop and amend details on the layout of the combined beaches, which would provide 1,000 feet of continuous beachfront.

The plans were submitted in late 2021 as part of a joint permit application, sharing the application with Orchard 2020 Trust, to both the U.S. Army Corps of Engineers and Illinois Department of Natural Resources.

Root has consistently contended that the Park Board never approved the submitted plans and the designs were not made publicly accessible in an appropriate fashion. Park Executive Director John Peterson said during Thursday’s meeting that the plans would be uploaded to the district’s website. They were available as of Monday, June 13.

Public outrage to the district’s plans began to mount in early May when the newest renderings of the plan began to circulate. Residents confronted park officials at town-hall style meetings on May 7 and 11, and during the Park Board meeting on May 26.

Winnetka’s Village trustees were compelled to reply at their meeting on June 7, providing negative opinions on aspects of the plan that limited public use of the beachfront.

Opponents of the latest iteration of the plan contend that the project’s proposed barriers — which include a breakwater extending onto the beach, a slatted steel fence on top of the breakwater and planter pockets — are not only restrictive but also pose a threat to the Illinois Public Trust Doctrine, which protects the public’s access and right to the shoreline of the Great Lakes.

“I’m frankly astounded, after reviewing the documents, that we got this far without public input — outside of the very recent outcry,” said David Stevens, who lives along Sheridan Road north of Elder Beach. ” … I think (combining the parks) is an admirable goal, but at what cost. The cost of … the infringement of public access to the beach far outweighs the combining of the parks.”

Stevens’ sentiment was echoed by numerous residents who packed the Park Board chambers Thursday evening.

During the commissioners’ discussion of the topic, James reviewed the project’s details; though, his presentation was interrupted by residents some of whom said they were aware of the details and wanted a vote to pull the permit application.

After Root’s motion to withdraw the application was seconded, James requested the board consider tabling the discussion until Codo and Lussen were available to contributing. He later implied that both commissioners would side with him and Archambault to table the topic in favor of more closed-session conversations. Adams also advised the Park Board to adjourn to closed session to “receive more information.”

James said pulling the permit at this point “sticks a fork in the eye” of the resident behind Orchard 2020 Trust.

“I know you all hate me right now,” he said. “I am trying to navigate a very complex situation. There are issues beyond what I am able to share with you tonight.”

According to a park district statement on Monday, June 13, the permit was withdrawn and its removal was acknowledged by the Army Corps of Engineers. The district reportedly expects a response from the state soon.