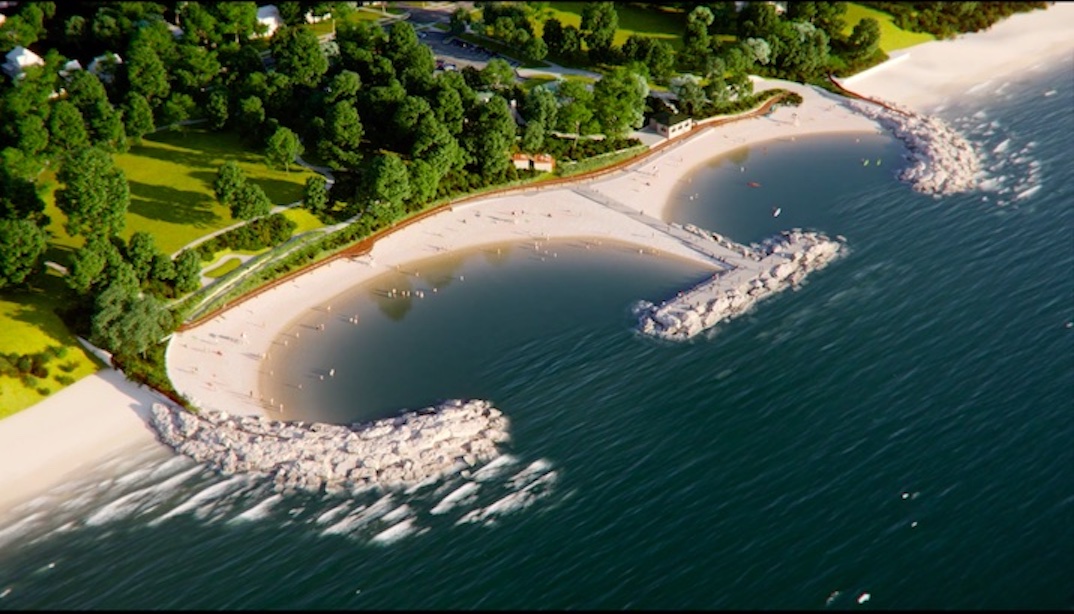 A rendering of the proposed Elder-Centennial combined beachfront in Winnetka. | Image from Teska Associates

The Winnetka Park District Board of Commissioners got an earful from residents Thursday evening, when nearly every speaker shared negative feedback on proposed plans to reimagine Elder Beach and Centennial beaches.

More than 50 people packed the park district’s community room on Thursday, May 26, with about 20 of them offering public comments primarily against specific parts of the plan, which has been in development on and off for the past eight years.

A majority of the concerns centered on a louvered — or slatted — steel wall that is planned to encircle the combined beach, including the property at 261 Sheridan Road, which the park district is obtaining through a unique property exchange agreement made on Oct. 10, 2020, according to park district documents.

In speaking to the board, many of the residents referred to the proposed barrier as 13 feet high, which is the height of the wall at certain points as it rises and falls with sand and structure levels.

Longtime Winnetka resident Katie Stevens, who is a neighbor to the 261 Sheridan Road home, made an impassioned plea to the board to not approve plans that call for the construction of the wall, even though she said she’s “fought” for years for the village to obtain the property.

“I feel you need to set an example,” she said. “I am begging you all, please do not build a wall into the lake.”

Because of the fence and breakwater, which would extend onto the beach, access to the 1,000 feet of public beachfront will only be possible through the park’s entrance off Sheridan Road. Pedestrians would not be able to walk across the beach at the waterfront.

Stevens said it was “selfish” that a few people could decide what to do with a lake that is meant for the entire community, and said that Winnetka residents are not allowed to build a 13-foot fence on their property. She questioned why it was OK for the park district to do so.

She suggested other ideas that would not block waterline access or beach views.

Alan Welch said he didn’t think the public has had enough time to comment on the plans and the applications to the Illinois Department of Natural Resources and Army Corps of Engineers, and asked for more time.

“I think the time period should be extended or the application should be withdrawn until there’s proper notice given to the people of Winnetka,” he said.

Another resident, Jim Rowe, said he believes the Winnetka 2030 plan, which includes the improvement of Elder and Centennial beaches, is a good plan, but he wondered if the purchase of the Sheridan Road house was necessary.

He shared documents that showed plans without the purchase of the home and addition of the fence and said it was “really quite attractive.”

“It doesn’t put up cages that block off the beach,” he said, adding the agreement to obtain the home “radically changed the approach” to the proposed changes.

“While the 2030 plan is elegant, I think the suggestion of the steel louver fence is grotesque,” Rowe said.

In addition to public comments, a petition with 512 resident signatures, as of the time of the meeting, that asked the board to not move forward with the wall was presented.

Following the meeting, The Record spoke to Costa Kutulas, director of parks and maintenance, who clarified that the wall in question is not 13 feet, but rather that the louver wall is about 6 and 1/2 feet on the western end and runs out 184 feet, eventually tapering off to about 18 inches.

“And that is an undulating wall, kind of a wave motion (that has been) proposed to be constructed per the permit that was identified over a year ago” and has been in the proposal ever since that point, Kutulas said.

He believes the 13-foot number comes from the elevation on the south side of the wall, which will be on residential property. Kutulas said the wall is taller on the neighbor’s side because of the change in sand levels.

During the meeting, Park Board President Warren James thanked everyone for their comments and assured the residents that all of their comments were heard.

Addressing concerns that there hasn’t been enough time for public comment, James said the Illinois Department of Natural Resources has extended the time to provide feedback on the application to Thursday, June 2, meaning residents still have a week to share their thoughts.

James said that the plans are in the development stage and have are not yet board approved.

The next steps, according to James, are for the IDNR to provide feedback based on the comments they received, which he is certain will happen and could lead to modifications of the plans. And he said there’s also no guarantee the application will be approved.

During the meeting, Commissioner Colleen Root motioned to pull the application, citing concerns that the public may not have had sufficient time to comment, but the motion failed after it did not receive a second.

James said this plan has been in the works for eight years and that there have been dozens of opportunities for the public to comment, including earlier in May when open houses were held on May 7 and 11.

“This issue has not gone unnoticed,” he said regarding concerns about the wall.

“It’s not too late,” James added regarding feedback. “Your comments are being registered.”