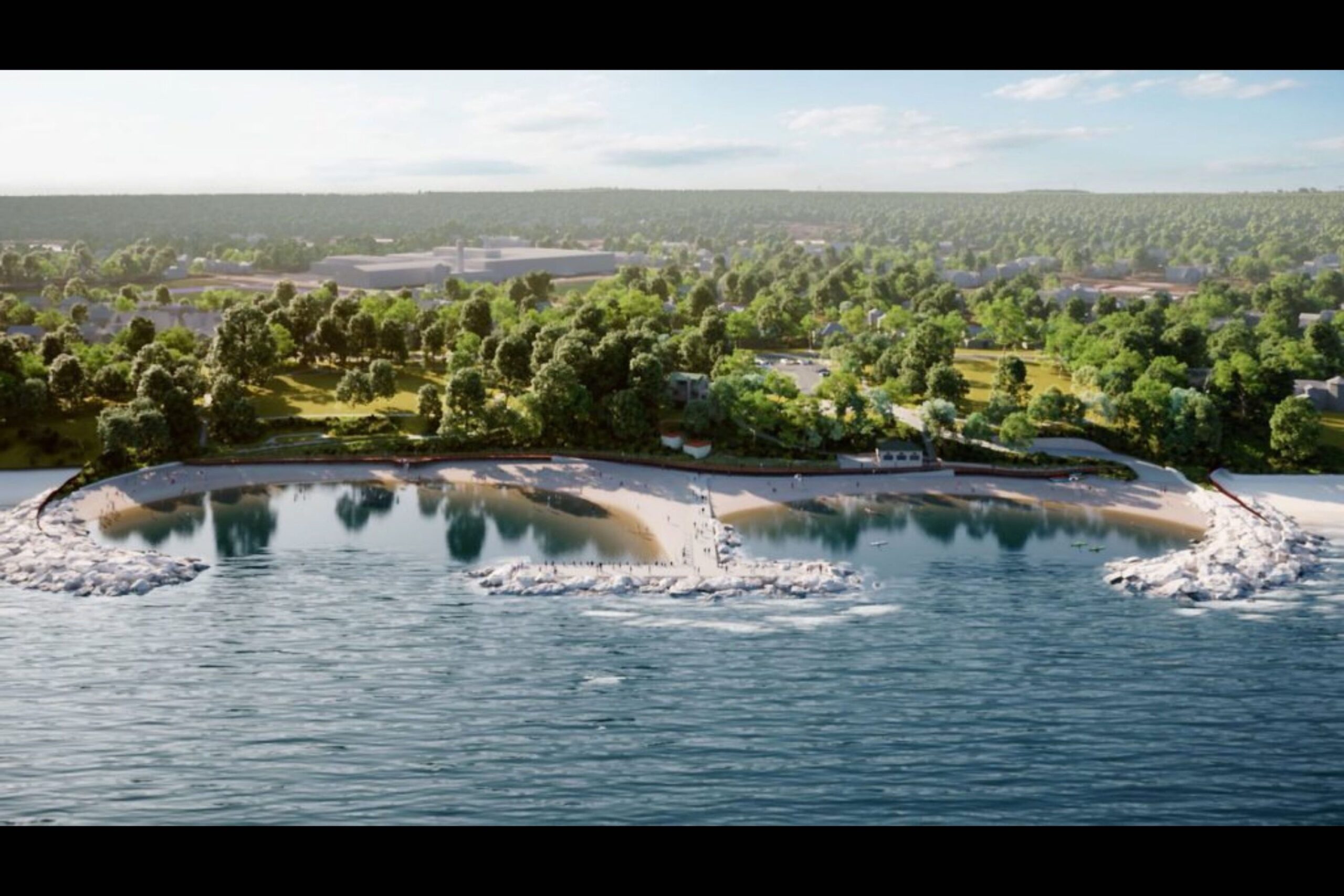 A rendering of the proposed beachfront reimagining that combines Elder and Centennial beaches. | Image provided by Winnetka Park District

As the Winnetka Park District continues to develop plans to refurbish Elder Beach and Centennial Beach, members of the public had a chance to ask questions of public officials and see the plans during an open house over the weekend.

The open house on Saturday, May 7, at the Winnetka Park District headquarters was intended to “inform, answer, re-educate” the public on the plans to update the beach, according to Costa Kutulas, director of parks and maintenance for the Park District.

Residents will have a second chance to provide feedback on the proposal on Wednesday, May 11, at 7 p.m., for those who may not have been able to attend Saturday morning’s event.

A component of the Winnetka Waterfront 2030 Plan, the idea to improve the beach has been in the works for over a decade, starting with the Lakefront Master Planning process in 2011, Kutulas said.

The plan accelerated in 2020 when the property between the two Winnetka beaches became available and a unique, multi-million-dollar land swap arrangement was put in motion that is set to give the park district about 1,000 feet of continuous public beach and eight acres of united parkland.

The beachfront renovations are in the permitting stage, which includes gaining proper approvals from multiple agencies, including he U.S. Army Corps of Engineers and Illinois Department of Natural Resources.

Highlights of the proposal include repurposing Centennial Beach by converting it from a dog beach to a swimming beach and morphing Elder Beach, which is currently used for swimming, into recreational beachfront, enabling nonmotorized water sports, such as kayaking and paddle boarding.

Additionally, breakwaters will curve in on both ends of the perimeters of the combined beach, and a T-shaped pier will split the beaches and extend into the water, ending in a pedestrian “island.”

Kutulas said the district also plans on improving the breakwater and making it more environmentally friendly. A factor of this is building what he referred to as “planter pockets,” which will support new tree growth.

“In doing so, I think we’re creating a wonderful view and vista for the community, a safer environment versus the harsh stone, heavy stone you might feel on the beach,” he said.

A home exists on the property pending sale to the district, and, Kutulas said, it will be utilized in the beach improvements; though what that will look like has yet to be determined.

A planned boardwalk, which Kutulas said will create a “two-tier effect” for the beaches, will also help unify the beaches.

The plans also call for ADA-accessibility to the beach.

Kutulas also said that none of the current proposals are final and much work is yet to be done before renovations begin.

As members of the public observed the design plans and informational posters, park officials were on hand to answer any questions.

Jessa Fuller, who said her family “is a big user of Winnetka beaches,” is interested to see what will be done with the Sheridan Road property, and said there’s a lot of directions she thinks the park district could go when deciding what to do.

“For example, (they could) make the house property a restaurant,” she said. “Currently I’m not sure how I would feel.”

She also complimented the designs of the project.

Another resident, Elisha Gray, said he likes the plans to connect the two beaches.

“I think it’s a good idea to have a continuous beach at Elder-Centennial,” he said.

While the combined beach has generally been met with support by the public, certain details of the renovations have drawn criticism.

Resident John Root said one of his concerns is the location of the planter pockets. He believes the plantlife in that area will obstruct views of the lakefront.

“So, you’re going to have this sort of vegetation wall with louvers behind it that will block your view up and down the beach,” Root said. “I’m concerned about that.”

He added that he would also like to know what the park district will do about bacteria levels.

Addressing Root’s concerns, Kutulas said that over the past several years the district has completed more frequent water-quality testing, with test results produced within 24 hours. The district, however, has not completed testing in 2022.

He said that many of the issues that have caused beach closures, particularly at Elder Beach, have been corrected, and the plan calls for adding two new water structures as well.

One common concern among the public is the erasure of the dog beach, as previously reported by The Record. Gray was one of those residents who had questions about opportunities for dog recreation.

“I’m a bit confused about what’s being proposed or discussed regarding the dog beach and park,” he said as he examined a poster discussing the dog beach. “There are three (options) it looks like. Are they options, or exclusive or inclusive?”

Kutulas said the district has established a committee to examine what alternative opportunities for dog recreation there may be.

The committee is currently looking at three options: 1.) to allow dogs on either Elder or Centennial beach during off-season months; 2.) to allow dogs at the Tower Road Beach, either year-round or in-season; and 3.) looking at an off-beach option for dogs in the community.