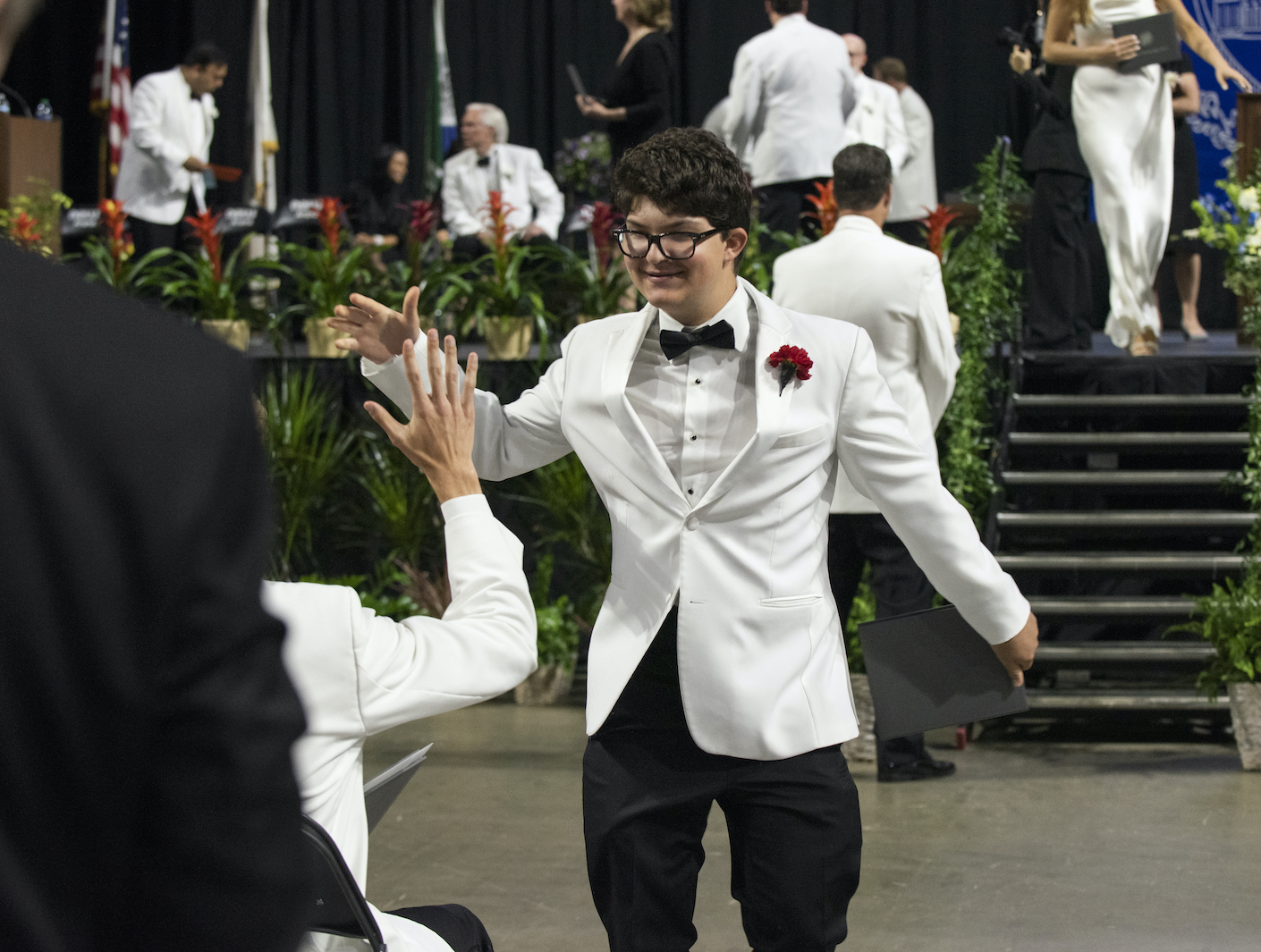 Kael Anderson gets a high-five after coming off the stage during New Trier's graduation ceremony Sunday, May 29, at Now Arena in Hoffman Estates | Photos by Lois Bernstein/The Record North Shore

When New Trier High School students returned to regular in-person learning at the start of the school year, the class’s collective behavior could have gone one of two directions, senior Elizabeth Payne said.

They could have remained disconnected and rode out their seniors years or they could do the opposite.

“We didn’t feel close as a class being online,” Payne said. “We took that sense of loss and everybody really showed out. … Everyone rallied around different events and made (senior year) really special.”

Payne described the class unity and more during her commencement address on Sunday, May 29, at NOW Arena in Hoffman Estates.

Seniors Darragh Buckley and Emily Vitari walked on stage to represent the class’s Habitat for Humanity Leadership Board, which guides the seniors’ service project. New Trier students again led the construction of a home in Lake County and presented the home, which was built for a local family, as the senior class gift.

The alumnus speaker was Samuel Harris, 87, a survivor of the Holocaust who hid inside concentration camps in Deblin and Czestochowa from 1942-1945. Harris came to America and was adopted by a Northbrook family in 1947. He graduated from New Trier in 1954. He authored the book, “Sammy: A Child Survivor of the Holocaust” and is a founder of the Illinois Holocaust Museum and Education Center in Skokie.

“My experiences at New Trier launched me toward a successful life, and on my life’s journey, I learned not everything happens for the best,” Harris told the graduates. “Instead, make the best out of everything.”

After listing the global wars and conflicts since he graduated from New Trier, Harris concluded with a monumental challenge for the Class of 2022.

“I have a challenge for your generation … and it is to conceive, believe and achieve peace on Earth.”

Payne, who was chosen by administration to deliver the student address, wrapped up the evening’s speeches, telling her classmates about the character built during the pandemic.

Payne celebrated just some of her class’s triumphs, from stage performances to Habitat to Humanity to athletic accomplishments and club successes, before congratulating her peers.

“No matter where the winds of change lead you, I hope you take what you’ve been given here at New Trier, make it a little better and pass it on,” she said. “It is no longer enough to continue as a bystander in a world that commands constant attention.”

Loyola Academy’s 518 members of the Class of 2022 were honored on May 21 in Northwestern University’s Welsh-Ryan Arena during the Wilmette school’s 112 graduation ceremony.

Principal Charles W. Heintz said in his address that it was a memorable class, one that returned to in-person learning after a year and a half of virtual education.

“Our return to campus provided you with the setting to celebrate and share your incredible gifts,” he said in part. “It provided the moment to remind ourselves about what we find magical about this special community. And it provided the promise to re-enter a community where each of you is known and loved.

Class Valedictorian Peter Scheidt, who will attend the University of Chicago, spoke to his classmates and also played them music. A talented cellist, Scheidt played Bach’s cello suite No. 1 in G Major, Minuets 1 and 2.

The ceremony was also the final at Loyola Academy for School President Rev. Patrick McGrath, who just completed his 13th year at Loyola Academy. Rev. Gregory J. Ostdiek will step into the role next school year.

The school played a farewell video that included thoughts from students, staff and peers before McGrath spoke to the Class of 2022, giving them a farewell of his own.

“Our world is deeply in need of creative, committed, caring people of faith,” he said. “The world needs reflective people who can think deeply, engage creatively and respond compassionately. Our world needs you. You have made us proud.”

Seniors Irene Mensah and John Phillips received the Graduate at Graduation Awards, which annually are presented to “two well-rounded seniors … who best resemble the ideal Jesuit high school graduate —someone who is religious, intellectually competent, physically fit, loving, open to growth, and committed to doing justice,” the school said in a release.

The Educator of the Year Award — voted upon by the senior class — went to social studies teacher Brandon Ceplecha.