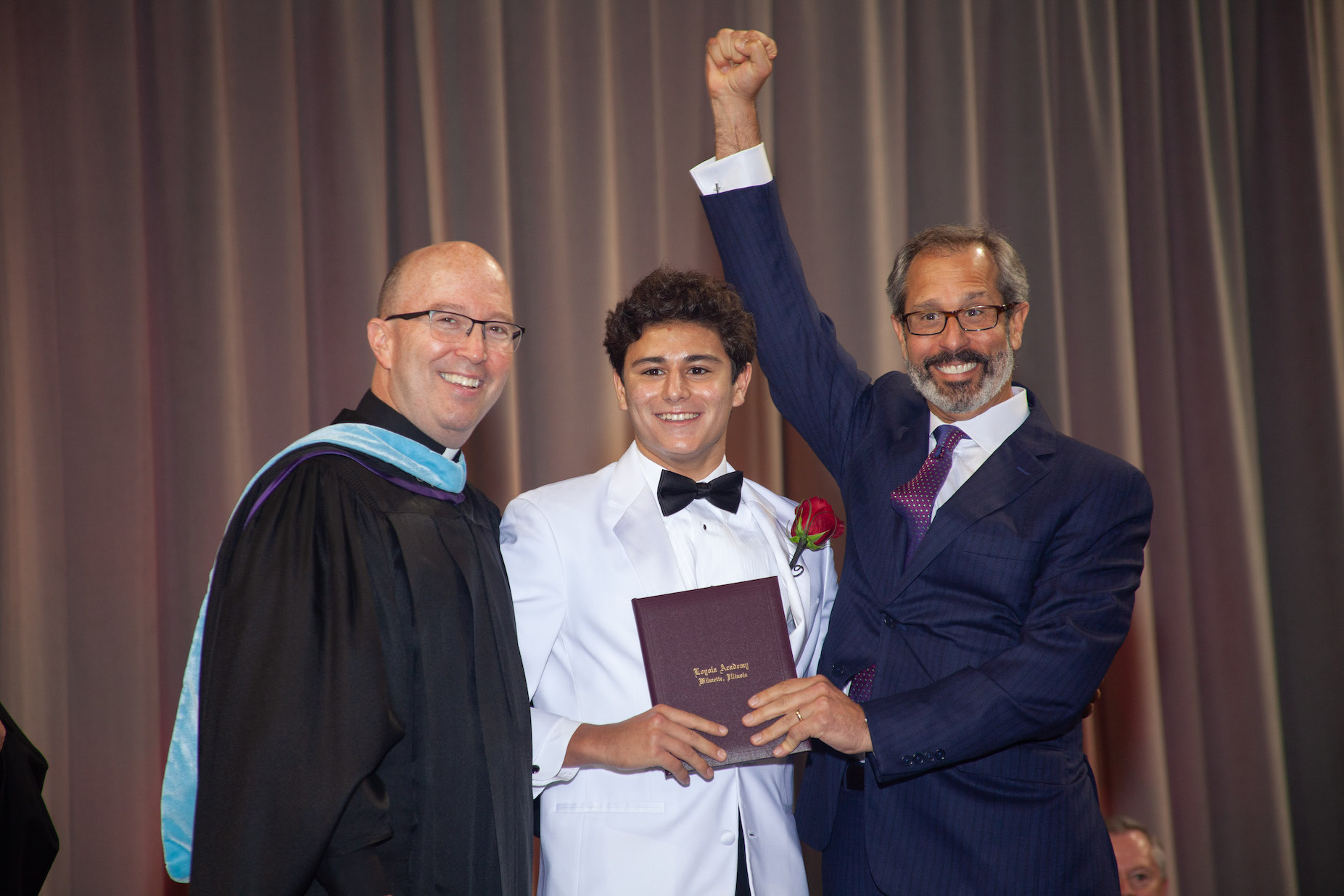 Patrick McGrath (left), who came to Loyola Academy in 2009, congratulates a student at graduation in 2019. | Steve Donisch/Loyola Academy

One of the pillars of the Jesuit order is connecting and serving people all over. And in that regard, the Rev. Patrick McGrath said his departure from Loyola Academy is overdue.

McGrath announced to Loyola alumni Feb. 17 that he would vacate his position as school president after next school year, his 13th at the Jesuit high school in Wilmette.

“When I began the job, I thought 10 to 12 years would be a good run,” McGrath told The Record. “ … It’s good to pay attention to not leaving somebody in a place for too long. I think it’s good for the institution to get new eyes and new blood in leadership and I think it’s good for Jesuits that we move to different assignments with regularity in our lives to … go where the greater need might be.”

McGrath, who in 2009 was named the school’s eighth president, does not yet know where he will serve after the 2021-22 school year ends. He said it could be in a parish or in higher education but will likely remain in the Jesuits Midwest province, which spans from the Dakotas to Ohio.

The early notice gives the Loyola Board of Trustees an 18-month window to replace McGrath, which board President Nancy Paridy said will be no easy task.

“We were so lucky to have him as long as we’ve had him,” Paridy said. “He built on (Loyola’s) solid foundation and made it an even more wonderful place and more futuristic and inclusive school.”

Paridy said her goal is to name McGrath’s successor by the end of 2021 to enable a significant transition period.

“It is a wonderful gift he’s given us,” Paridy said of the advanced notice. “We will be able to kick off this very robust search process very shortly.”

The search, she said, will include input from all of Loyola’s stakeholder groups: staff members, students, current and former parents, and alumni.

The board will look for someone who is “passionate about” the Jesuit experience and mission to serve others, Paridy said, and can set Loyola Academy up for the future.

Thinking ahead is something always top of mind for McGrath, who emphasized his desire to stay at Loyola Academy through the $26-million performing arts center build, among other projects

McGrath called it a “priority project,” and it is set to break ground in April.

“I’ve been really devoted to this theater, performing arts project,” he said. “We had six different things over the last seven to 10 years that we’ve been raising money for … and I believe what that performing arts center is going to do for students here is going to be a very, very significant thing for Loyola.”

The onset of the pandemic created a new set of challenges for Loyola Academy and schools across the country. McGrath said he never considered leaving during the crisis and added there is work ahead to “reconnect” the community at Loyola, after so much time apart.

That is one of many tasks McGrath will tackle in his final year and a half in Wilmette.

“One of the things I’m most pleased by in the time I’ve been able to serve here is a rededication to the core of the Jesuit Catholic life of Loyola,” he said. “We’ve tried hard to really cultivate an ever deeper appreciation of the spirituality that comes out of the Jesuits. That is the ongoing No. 1 priority for me and I think it will be for my successor as well.”