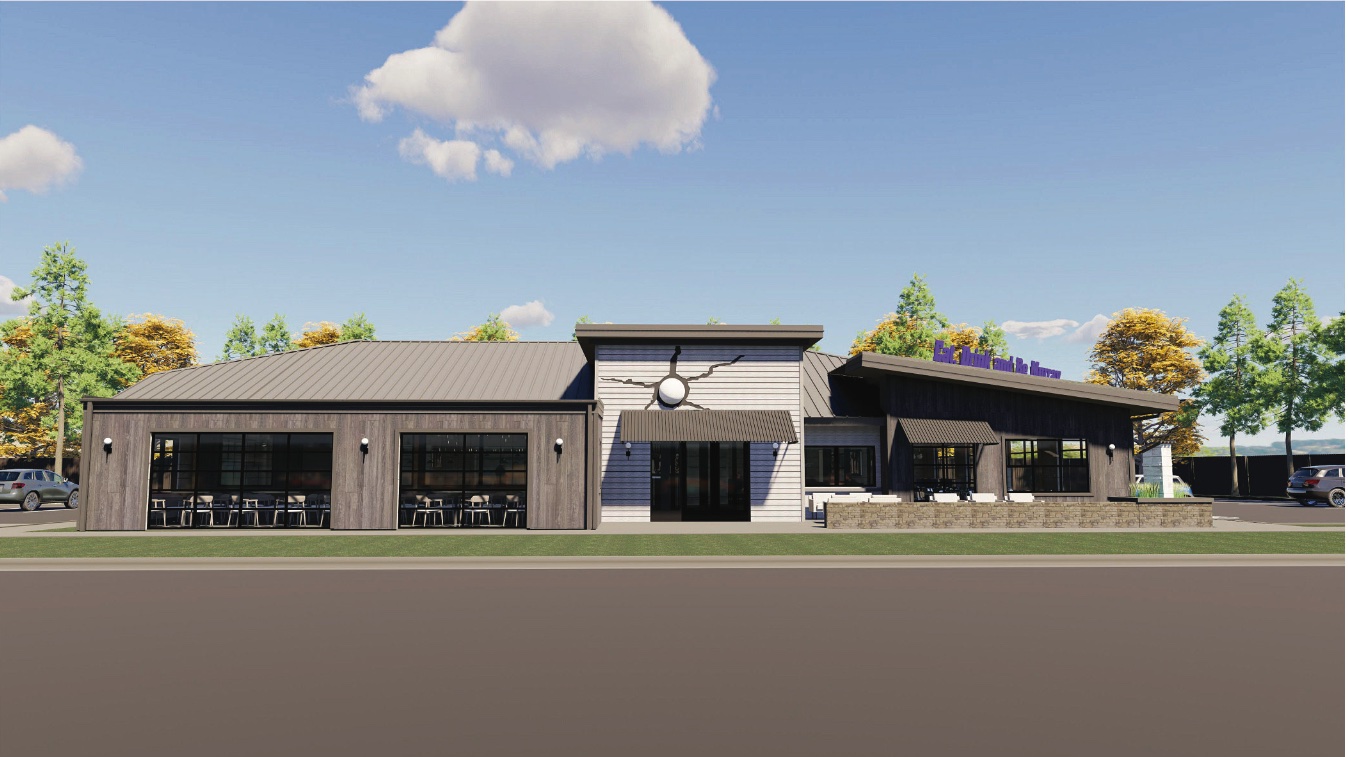 A rendering (view from Skokie Boulevard) of the proposed design of Murray Bros. Caddyshack Restaurant, which is set to overtake the former Baker's Square site in 2022. | Images by Newman Architecture

As Wilmette’s reputation as a dining destination continues to grow, two anticipated restaurants are getting closer to joining the party.

Murray Bros. Caddyshack on Skokie Boulevard is collecting necessary public approvals, while Buck Russell’s in Village Center is setting the table for a spring opening.

The Wilmette Village Board will consider on Tuesday, March 8, a special-use permit for Caddyshack Restaurant, a project from the famous family of entertainers originally from Wilmette. The restaurant’s plans received a positive recommendation from the Zoning Board of Appeals in February.

In news broke by The Record in May of 2021, the Murray Bros. restaurant group purchased the property at 200 Skokie Blvd. — the former home of Baker’s Square — to build a third location (St. Augustine, Florida, and Rosemont) for Caddyshack Restaurant.

In the fall of 2021, representatives from the group said they hoped for a March 2022 opening. While officials were quiet about an opening date, the plans call for the construction of two additions, fencing and more that has yet to begin.

The restaurant’s plans, which passed through the zoning board, show about 2,500 square feet of additions to the current structuring, making for 6,913 square feet of space that can seat 216 people indoors and 24 more outdoors — making it one of the highest capacity restaurants in the village.

Blueprints to Caddyshack Restaurant reveal a rustic exterior aesthetic with corrugated aluminum panels and awnings and cement-board siding interrupted by garage-style doors — four on the south side and three on the west, surrounding the main entryway — that will open in nice weather.

According to plans passed through the zoning board, Caddyshack hopes to be open from 7 a.m. to 10 p.m. Sunday through Thursday and 7 a.m.-11 p.m. Friday and Saturday.

The zoning board considered testimony and submissions from many neighbors of the property who are primarily concerned about noise and parking, according to village documents.

During the zoning meeting, representatives for the restaurant worked to “address misconceptions” about the concept, testifying that there will not be live music.

“This is not a boisterous restaurant,” said Marcus Cook, of KMPC Inc., who is described as the applicant in the documents.

With the additions and landscaping plans, the restaurant plans to maintain 69 parking spaces in the existing lot. That number is more than double the village requirement (28 spots) for the space.

The board’s commissioners agreed that the proposal met local standards and the applicant has worked with neighbors up to this point to address concerns. Further addressing concerns, Wilmette staff is recommending the Village Board approve the special use with certain conditions: The restaurant must apply for an 8-foot-tall fence along its eastern boundary; the location’s main signage cannot be on during off-hours; and parking for restaurant employees may be required offsite.

Back in downtown Wilmette, signage for Buck Russell’s Bakery & Sandwich Shop has spanned three storefronts on Greenleaf Avenue for months.

Last summer, Ballyhoo Hospitality — the restaurant group behind Buck Russell’s, as well as Sophia Steak in Wilmette and Pomeroy in Winnetka — had hopes of a late 2021 opening. Now, the group is saying this spring.

“We don’t have an opening date just yet, but are gearing up for one,” said Nicole Ess, the group’s director of marketing. ” … Everything is well on its way and we’re very excited to be a part of the community.”

Leading Buck Russell’s kitchen is pastry chef Jenny McCoy, who is also a managing partner with Ballyhoo and previously worked at Emeril’s, Charlie Trotter’s, Blackbird and other restaurants. According to a press release from Ballyhoo, McCoy’s pancake cake — “with layers of buttermilk pancakes and a rich maple buttercream icing” — will be a signature item at Buck Russell’s.

Guests will order at the counter and find a seat in the diner, which according to the release “is a modern nod to the classic American diner” that seats 34 across booths and tables and 12 more at the counter.

The restaurant reportedly will be open from 7 a.m.-5 p.m. every day.

The bakery, Ess said, will serve all the favorites: cupcakes, pies, crullers, cookies and cakes to order.

On the sandwich menu will be both hot and cold subs, as well as items for breakfast and lunch. Buck Russell’s will also have chopped salads and soups and feature a children’s menu.

“After the last couple of years we’ve all had, we’re excited to bring the North Shore something light-hearted and comforting —a place to simply enjoy,” McCoy said in the press release. “We want Buck Russell’s to be a place that feels like home — the local after-school hangout, or where you take the team after a big win; the go-to for a coffee and pastry before your morning commute; your lazy Sunday morning breakfast. And we will definitely be the best bakery in town for layer cakes.”