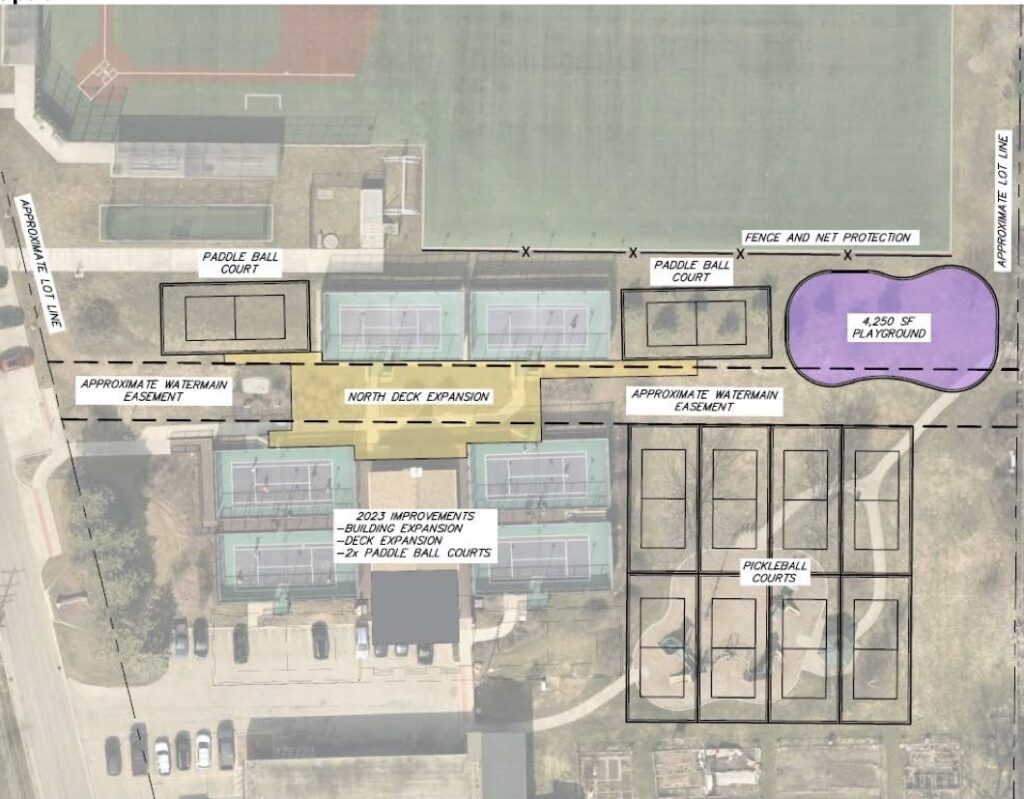 A diagram of the proposal, which includes eight pickleball courts and two more paddle courts, as well as relocation of the playground.

West Park neighbors who are arguing against plans to add lighted pickleball courts to the Wilmette park took their concerns and grievances directly to the Wilmette Park Board on Monday, Feb. 14.

Although the West Park facility expansion was not on the board’s agenda, nearly a dozen people told the board that they are having issues with the existing paddle ball courts and are concerned that pickleball courts will not only magnify those issues but also will continue to diminish the park’s green space.

Following policy, the Park Board did not immediately comment or answer questions in response to public speakers.

The group of residents has raised concerns at public meetings since early January, confronting park district officials at community meetings at West Park on Jan. 6 and at the Community Recreation Center on Feb. 9.

In the spring of 2021, park district officials began looking at expanding the West Park facilities based on growing demand for more platform tennis and pickleball offerings. The park features six paddle courts and a paddle-tennis hut, but officials said interest in the sport has outgrown the facilities.

Jessica Martinez, who lives adjacent to the park, said the distractions caused by the existing paddle courts have affected her work.

She encouraged the board to not move forward with its plans until it does a study on the noise and light issues.

“It’s not about no (to) everything,” Martinez said. “It’s about doing the right assessment first, and then putting the plans together.”

The youngest speaker, Penny Dunn, 9 1/2, said she and her friends play in West Park all the time and utilize not just the playground equipment but also the garden and sometimes just play in the grass.

She said “the only bad parts are the stray balls and the bad words we hear the paddleball players saying.”

Profanity usage was brought up by multiple speakers in their comments to the board.

Dunn said she’s sad that more trees might be removed to expand the facilities.

“West Park is the only playground my neighbors and I can safely walk to,” she said. “It wouldn’t be fair to take that away from us.”

Dunn suggested that the courts be built at Centennial Park, a strategy echoed by other speakers as well.

Claire Sullivan, who also lives adjacent to the park, said she loves gardening so much that she has a garden mural on her garage that faces the West Park garden. She’s concerned that, if plans move forward, those gardeners won’t want to continue with their hobby.

Sullivan described the existing lights as “blinding” and said she’s concerned that the loss of greenspace will be harmful to the neighborhood.

“It’s already at a difficult level,” she said regarding the greenspace. “If your plan goes through, it’ll be at the level where everyone who lives there now won’t know why we live there anymore. It’s not the Wilmette we came here for.”

Sullivan encouraged the board to consider family usage of the park and the neighborhood concerns.

“I don’t want pickleball to not exist,” she said. “I just don’t want it to be hazardous to our neighborhood.”