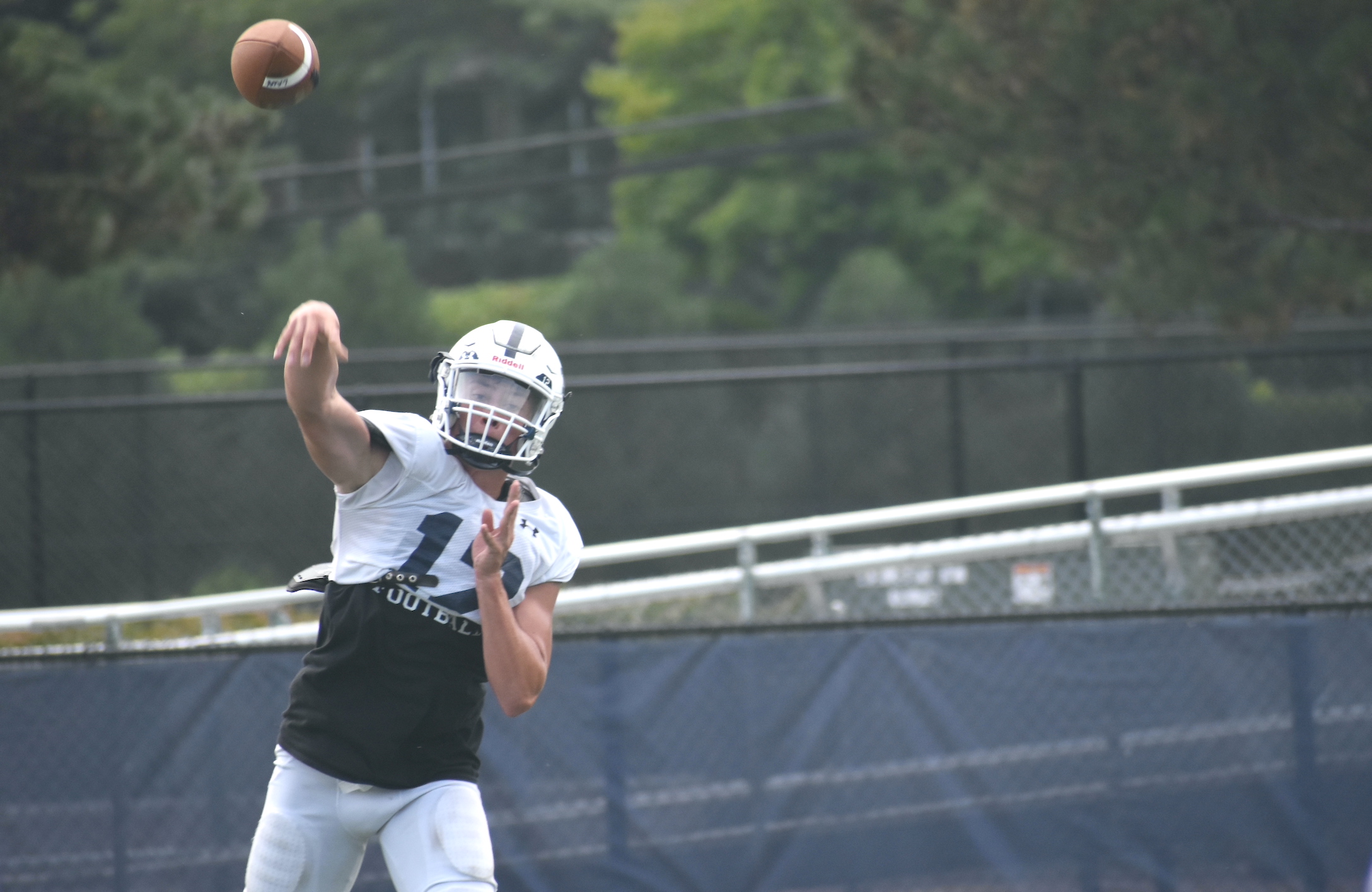 It’s not often that a team can accomplish one of its season goals after just one game, but the New Trier football team is only days away from doing so.

Under the leadership of head coach Brian Doll, the program places an emphasis on winning its Week 1 game each year. It may be an understated target, but it is one Doll firmly believes goes a long way in setting up a team’s season.

“One of my goals every year is to win the first game,” Doll said. “We’ve been very fortunate since I have been here to win a lot of first games and I think it gets you off on the right foot.”

The Trevians will look to fulfill Doll’s aspirations when they travel to play Lyons Township High School at 7 p.m. on Friday, Aug. 27.

New Trier enters the new campaign on the heels of a 5-1 spring season — postponed from the fall because of COVID-19 restrictions — that saw the team earn thrilling victories, but also one harrowing defeat, a 14-9 road loss, at the hands of its longtime nemesis Maine South.

To accomplish one of the program’s other goals, winning the Central Suburban League South, the Trevians will likely need to dethrone that nemesis — and perennial powerhouse.

Doll and the team’s coaching staff know that “it all goes through Maine South.” But the Trevians will focus on the Hawks when they get there.

The team will head into this campaign eager for a full year of enjoyment — instead of the abbreviated, abnormal season that took place earlier in 2021.

“For us, the main thing right now, it’s just the return to some type of normal and just letting them be kids again and letting them experience all these things they are supposed to experience as high school kids,” Doll said. “Instead of having six weeks of fun, we’re going to have at least 9, so that will be the fun part.”

New Trier brings back a plethora of experience on the offensive side of the ball.

The 6-foot-4, 215-pound senior is entering his third year as the Trevians’ starting QB and will look to build off an All-Conference junior campaign that saw him pass for more than 900 yards in the shortened year.

“He just has complete control of the offense,” Doll said. “Working with coach (Mike) Napoleon, he just understands the offense perfectly. He knows where everybody is. His maturation and his understanding of the pass-defense coverages and blitz pick-ups, it’s just at a better level now. And that is what you get with a senior quarterback, who has now started for three years.”

Cremascoli showcased an ability to beat opposing defenses last season with both his arm and legs, but Doll believes he’ll truly blossom into a dual-threat quarterback this season.

The senior captain is heading into Week 1 with high expectations for the unit.

“Having (our returners) back is really important because on offense we like to run tempo, and with experience, we can be faster with what we’re doing on offense.”

The Trevians anticipated great depth at the quarterback position as both Cremascoli and junior Graham Mastros battled for the starting role throughout training camp. But Mastros is not currently with the team, Doll said, adding that he opted to focus on baseball.

The departure of recent graduate Brody Roth, one of the program’s most productive two-way players in recent memory, left a void at the running back position, but the Trevs enter the year with several options Doll believes can mirror Roth’s production.

Senior Jack Cummings is penciled in as the team’s starting running back, Doll said, adding that he’ll be one of few players on the roster that the Trevs will consistently rely on to play both sides of the ball.

Sophomore Jackson McCarey will join Cummings in the backfield. Doll said McCarey will offer the offense similar levels of speed and explosiveness that Roth has in previous years.

“Josh is just a great receiver but a better leader,” Doll said. “He is somebody we want to get the ball into his hands. “He does a great job for us in practice, and we can’t wait to see him play for us this week.”

Cohan, who missed a portion of last season with an injury, has impressed all offseason with his combination of size and speed.

The senior standout is eager to get back on the field.

“I’m super ready. I wasn’t satisfied with last year,” Cohan said. “It was hard sitting on the sidelines for the last four games. I’m excited to get back out there.”

The team’s coaching staff is also eager to welcome back senior Alex Mendes, who missed time last season with a leg injury as well but flashed an impressive skill set while on the field.

“Last year, we dealt with a lot of different injuries but going into the season, with Alex and Finn completely back, we’ve worked them back into some key roles,” he said.

New Trier’s offensive line will be led by Luc Elias and Jesse Mendoza, two “book-end tackles” for the Trevians who will anchor a line with significant size and experience.

The Trevs entered the offseason with “a lot of questions” on the defensive side of the ball, but the outlook is getting clearer by the minute.

The unit will likely be anchored by the team’s defensive line, which Doll called the group’s strength.

Charlie Zieziula returns for his third year on varsity, and the skilled lineman is poised to be a disruptive force for opposing offenses.

Joining Zieziula as one of the Trevians’ key pass-rushers is sophomore Ty Stringer, who Doll said is “young but very mature and very quick.”

“We’re having a hard time even with our experienced line blocking him at times during practice,” Doll added. “He’ll be someone we’ll watch for these next three years and he’ll be pretty special.”

“Our depth on the defensive line is about as strong as it’s been since I’ve been here and we have the combination of size and speed and just pure nastiness,” Doll said. “That is what makes us go, so I’m happy that we have it there. … They have impressed me.”

New Trier is replacing Roth, who was also an All-State linebacker, and Max Dancey on the second level of their defense.

Cummings, Ben Marrs, Will Morrison and Henry Wolf are slated to lead the group that Doll said he’s confident can get the job done.

Mendes and Charles Olges are penciled as the team’s starting safeties, while Andrew Brewer and Brad Johnson are slated to be New Trier’s starting cornerbacks.

Something special brewing on special teams

Kicker Niki Dugandzic may already be one of the most impressive special teams players in program history — and he’s only a freshman.

“I don’t think I am exaggerating: I’ve never seen anything like it,” Doll previously told The Record.

The newcomer routinely drilled field goals in the 40- and 50-yard range throughout the summer, and even connected from 57 yards out, Doll said.

Doll knows Dugandzic’s abilities will make the kicking and punting aspects of the Trevians’ special team units as strong as they’ve ever been.

“I know that we’re going to have a kid for four years that is just different and will change the game for us because when we get to the 30-yard line we can start kicking field goals and that is just not something we’ve been able to do for a couple of years,” he said.

The Trevians are expecting a battle to open the season.

“We do play on the road against a difficult opponent. I think they are much improved,” Doll said of Lyons. “They have a very strong quarterback who will be tough for us. But I told them, we have to get out of the gates fast. It’s going to be an electric environment because everybody is going to be excited to be back at a football game. … We just need to come out strong and do what we know we can do.”

Doll added that he hopes New Trier’s offense can settle in quickly given its senior-heavy nature. Defensively, the Trevs will “have to play fast and play hard and try to make big hits and get some turnovers,” Doll said.

After Week 1, New Trier will go on to play a challenging nonconference schedule that features games against Stevenson, Barrington and Conant.

The Trevs will open their conference season on Sept. 24 with a tall task: a road matchup against rival Evanston, which Doll said may be the “strongest” he’s ever seen. It will be the first of a five-game stretch that will test New Trier’s roster

“The conference this year is loaded. This might be the best our conference has been in a long time,” Doll said.