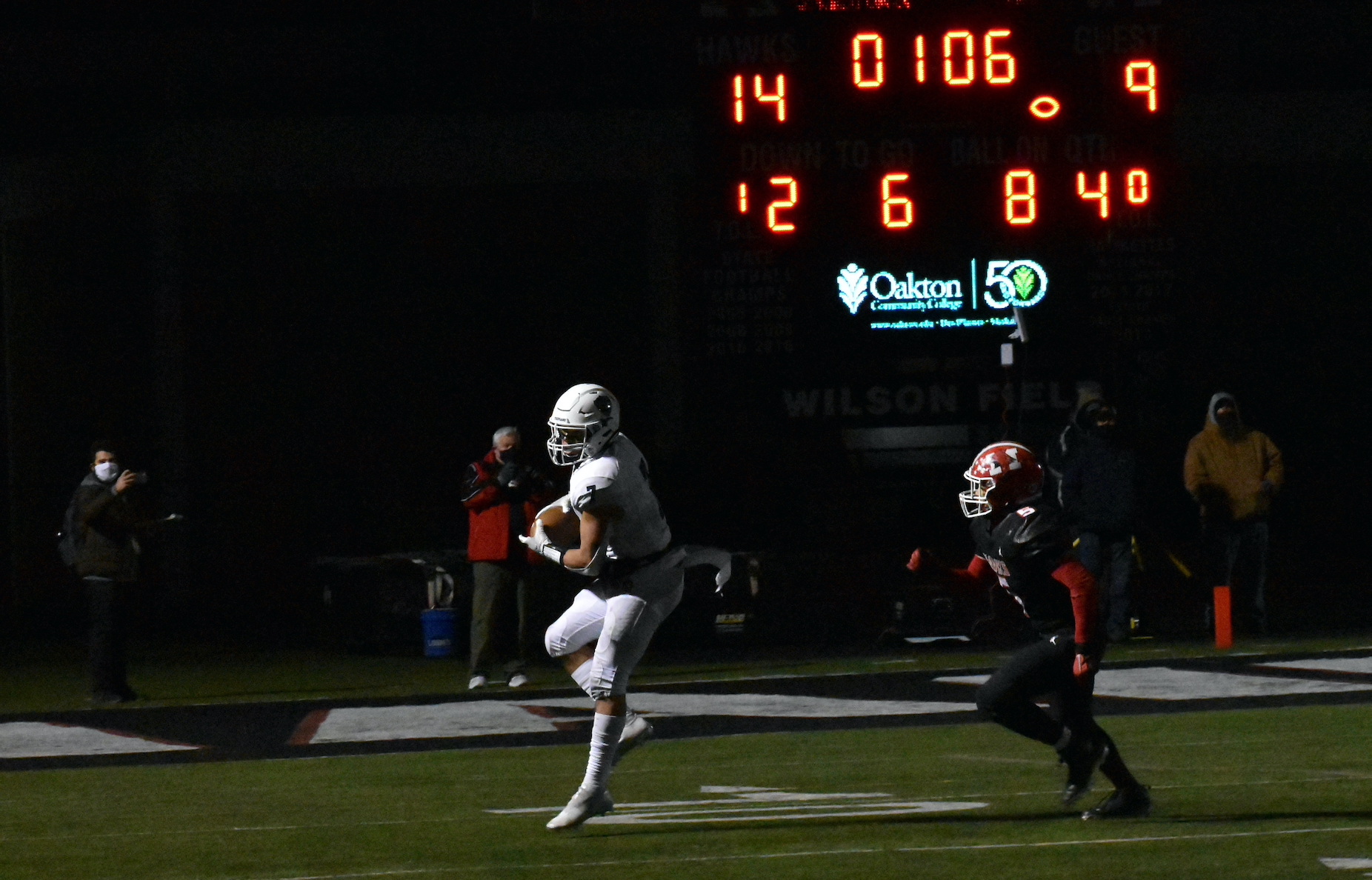 The recipe for a road win in Park Ridge over the Maine South Hawks often requires few mistakes, timely plays and perhaps a bit of good fortune.

New Trier’s aspirations to dethrone the Central Suburban League South’s perennial kings came up a few ingredients short on Friday, April 16, as the Hawks preserved their spot atop the conference with a 14-9 victory.

After New Trier jumped out to an early 3-0 lead, the Hawks swung the game in the second quarter by hanging 14 unanswered points on the Trevians in fewer than four minutes of game time.

The Trevians, who entered the game unbeaten and with a chance to take home the conference crown, cut the deficit to five points in the third quarter when senior Tyler Hardin capped off a nine-play scoring drive with a 1-yard touchdown run.

But the Trevians could not find the end zone in the fourth quarter, allowing Maine South to hang on for the win.

The game’s crucial series came early in the fourth quarter after New Trier’s defense stopped Maine South on a fourth and 8 from the Trevs’ 18-yard line.

New Trier drove the ball from its own 16-yard line into the Hawks’ territory before setting up for a third and 1 from Maine South’s 29. But a false start penalty on the Trevians pushed them back 5 yards and they did not convert on fourth and 6, surrendering possession to Maine South with just over seven minutes to play.

The Trevians defense seemed to have halted a promising Hawks’ drive when a trio of defenders wrapped up a Maine South player in the backfield. But a curious personal foul called against New Trier after the play resulted in a Hawks’ first down and gave them the ball at New Trier’s 35.

The referee appeared to signal an infraction on the tackle as it was blown dead, but it is unclear the nature of the personal foul or on whom it was called.

“We got unlucky in the final drive with some really tough calls at unfortunate times,” Doll said, adding that penalty “changed the outcome of the entire drive.”

Doll said he did not receive a clear explanation from the officiating crew on the call.

“(The officials) didn’t have any explanations tonight,” he said. “They were confused. This was a big-time conference championship game and they were not prepared for it.”

The Hawks continued their drive, eating up valuable time and progressing to New Trier’s 2-yard line before the Trevians defense produced another goal-line stand and winning the ball back.

New Trier got the ball back for one last chance with 80 seconds left, but could not pull off a miraculous late-game drive.

Making the Trevs’ Week 5 matchup even tougher was the absence of key contributors on offense, some of whom were sidelined because of injuries (Alex Mendes and Finn Cohan) and some who could not play because of required quarantines related to COVID-19 safety procedures.

Although the outcome was not what the program desired, Doll is proud of the team’s resilience.

“I’m glad that we fought,” he said. “I think that is important because we took a couple punches early and we could have folded. We were able to fight back and do everything that we could to make it a game.

“Look, when you can take it down to the end like this, it’s great. I’m frustrated with some things, but I will continue to love coaching these kids and teaching them everything that I can.”

The Trevians now enter the final week of their season with no confirmed opponent.

Week 6 was originally planned as a CSL crossover game against a foe from the North division, but Doll confirmed to The Record that New Trier will not be playing a CSL North school next Friday. He said Maine South and Evanston also do not have Week 6 opponents.

No matter the opponent, New Trier enters the final week thankful for one final game in an abbreviated season that once looked like it might never happen.

“I think (Week 6) is a celebration of football and how good they have been as kids in our program,” Doll said. “I think next week we want to make sure we focus on having fun. The conference season is over. Next week is just for fun whoever we play and that is why they started playing football and I think that will be the nice part, that we get to finish the season enjoying football.”