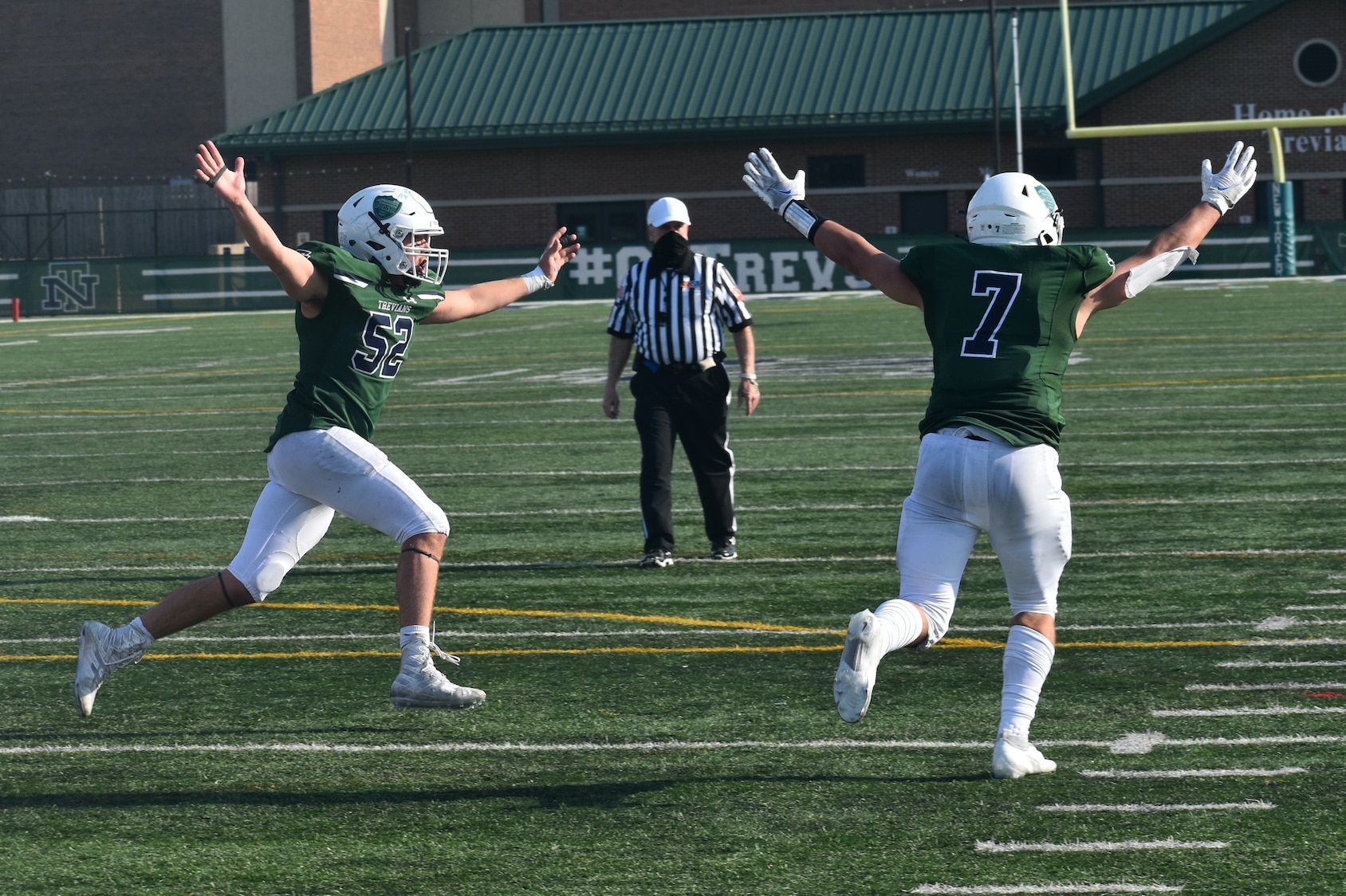 As the Evanston Wildkits prepared for a fourth-and-goal play from New Trier’s 2-yard line with one minute left, Trevians senior Tyler Hardin knew it might be the last snap he ever played on his home turf.

The Wildkits, trailing by seven points, seemed poised to deliver the game’s biggest play at its most crucial moment.

The battle will be remembered as one of the storied rivalry’s finest chapters.

“It was fourth down, there’s one minute on the board, and we all knew this was the last promised game on our home turf,” Hardin said. “Us seniors, we might never play on this field again, so it was one minute for the rest of our lives. We gave it all we had … and just left it all on the field.”

New Trier’s goal-line stand in the waning moments was far from the game’s only theatric.

After Evanston’s defense stymied New Trier all afternoon, the Trevians produced its most successful drive late in the fourth quarter.

Junior quarterback Nevan Cremascoli quickly moved New Trier inside Evanston territory when he broke free for a 41-yard scramble on the first play of the series.

“Off the snap, the corner was pressured on me so I ran kind of like a post (route) to the center of the field and I made a cut inside and it was just completely blown coverage and I was just wide open,” Cummings said. “It was just a rush of emotion catching the ball with no one around me. It was amazing.”

The junior is in his first year of playing football at New Trier, and he picked an opportune time for his first varsity score.

“We have a lot of great receivers, and for me to be the one to score that last touchdown, I wouldn’t have guessed it,” he said. “But it was definitely a fun play and a fun game to be a part of. It’s something I will never forget.”

A stellar defensive performance from New Trier paved the way for the late-game scoring opportunity for its offense.

“Defensively, let’s be honest, we’re creating turnovers, we’re giving good field position, and we were able to control the game,” he said.

“They are a good football team. That is one of the best Evanston teams that I have coached against since I’ve been here. To be honest, that is probably the best team I’ve seen in seven years at Evanston. They’re physical, they’re fast — and we withstood it. So I was really proud of our guys.”

The ‘Kits scored on their opening drive, and despite the forced turnovers, New Trier could not move the ball much.

Two second-quarter field goals — of 26 and 30 field goals, respectively — from New Trier’s James Chiarelli trimmed the deficit to one, 7-6, at halftime.

The Trevians offense played without two of its biggest contributors for most of the afternoon, as juniors Alex Mendes and Finn Cohan were sidelined. Mendes was ruled out before the game with a lower-leg injury and Cohan did not return after suffering a leg injury early in the first half.

“Our defense really held us in the game,” Cremascoli said. “They are the reason we were even there to make a play at the end. (Several) players got injured today, but we had to have some guys step up. … They all stepped up in big ways and helped our team win today.”

“This was such a great team win,” Hardin said. “We’ve faced a lot of adversity this year; a lot of players are getting injured — a lot of key players. Our backups are ready and they give it all they have. We just left it all on the field today. We balled out today.”

New Trier’s narrow win over rival Evanston pushes the Trevs to 3-0 at the halfway point of an abbreviated six-game season.

“It feels great (to start 3-0),” Cremascoli said. “It’s been our goal all offseason to go undefeated and to win the conference championship, so we’re 3-0 and that is a good step in the right path.”

The Trevians enter a short week of preparation as they will face the Glenbrook North Spartans (1-2) six days from now in Northbrook. While it’s a quicker turnaround time, the team’s mindset will remain the same.

“(The mindset) is just finish,” Doll said. “We’ve been all about finishing every day, finishing every practice. You know we’ve started this and now we’re 3-0, which is outstanding but we have to finish every week and that is just our consistent mindset. We are playing a pretty aggressive style of football right now and we have to continue doing that.”

In two weeks, the Trevs will match up with perennial conference powerhouse Maine South in a game that will likely decide the CSL South. New Trier knows what awaits them in that game, but for now, all the focus in on Glenbrook North and Week 4.

“We told our guys not to worry about Week 5, they have to only think about Glenbrook North, that is what we’re going to preach all week,” Doll said. “We have to go over there on Friday night and play a team that has some really nice offensive lineman and has a pretty good defense.”

New Trier will be without one of its key contributors on offense as junior Alex Mendes will be sideline for the remainder of the season after suffering an injury during practice, Doll said.

As of publication time, Finn Cohan’s status for Week 4 is not yet known. The junior tight end, who was also a key contributor on the New Trier basketball team, suffered a lower body injury during the first half against Evanston.

Editor’s note: check back later for updates to this story