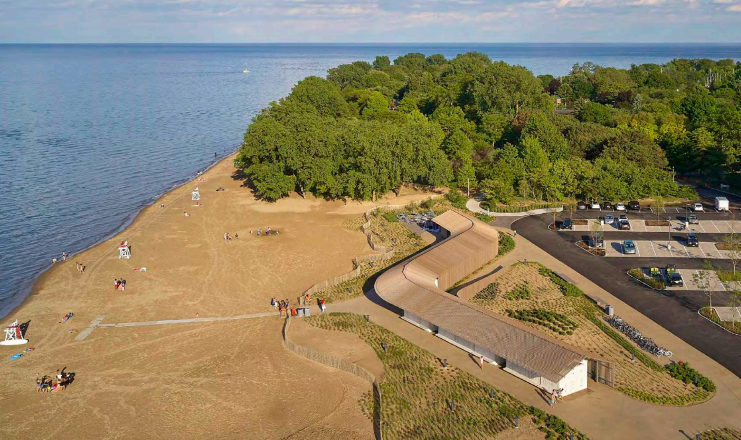 Gillson Park is a 60-acre property with a number of activities and natural amenities that are currently the subject of a comprehensive review. | Photo Courtesy of Wilmette Park District

A finish line is in sight for the Gillson Park Comprehensive Plan.

Architecture firm Woodhouse and Tinucci presented to park commissioners on Monday, Aug. 9, the results of a community survey and gave deadline goals as the plan advances in the fall.

Andy Tinucci said that his firm hopes to present preliminary park concepts by September before collecting more feedback to inform final plans, which officials hope reach the Park Board in November or December.

The new goal is a half-year delay from initial estimates in March, when officials hoped they could begin infrastructure work by year’s end.

Tinucci and representatives from design firm The Lakota Group walked the board through two presentations: the first on the Gillson Park Comprehensive Plan and the second specific to renovations to the Lakeview Center.

After the slideshows, a handful of residents took to the lectern with questions and comments for the board.

More than one speaker was a member of the grassroots group Keep Gillson Green, which is advocating to protect natural spaces in the park, as detailed in a report from The Record.

Many of the organization’s critiques of Gillson’s plans stemmed from early-stage ideas within four concepts presented at an April board meeting. Those concepts, as a whole, were rejected by the Park Board.

Park Executive Director Steve Wilson released information in a frequently-asked-question format in the hopes of dispelling what the district considers misinformation.

Commissioners took the opportunity Monday to address the perceived misinformation as well.

“There is no intention from any of us to pave paradise and put in a parking lot,” said Commissioner Allison Frazier, referencing a common critique from Keep Gillson Green that was recently removed from the group’s website. “ … We had you answer a 46-question survey so that we can get feedback from you that is representative of our entire community. I ask that we work together and spread the correct message that we are doing everything we can to work together as a community … and not putting in more parking spaces but truly being stewards ofthis beautiful park.”

Results of the survey, which is still available, indicate a community preference to preserve the park, with 33.5 percent of responses falling into the “maintain natural character” category and another 19.6 percent in the “let it remain as is” category, according to the Lakota Group.

Infrastructure improvements, such as upgraded drainage and roadways, did not rank highly for many respondents; however, are considered top priorities for park officials.

Tinucci explained that basic needs are rarely top of mind for park users.

“No one comes to the park for drainage,” he said. “They don’t value that or know how to value that.”

Commissioner Kara Koloskus and Board Vice President Julia Goebel suggested making information on those needs more available to the public.

A majority of resident speakers focused on proposed renovations to the Lakeview Center, which features programming, event and office space.

Previously, the Park Board separated the Lakeview Center and Wallace Bowl, an outdoor event space, from the comprehensive plan.

In the presentation, Tinucci explained three levels of proposed renovations to the 32-year-old Lakeview Center with “incredible potential.”

“It’s a facility on hand that is older and getting older and needs some TLC,” he said

Among the ideas are to move park district staff offices from the second to the first floor, remove a basement wall to increase programming space, update the restrooms and finishes that are “extremely dated,” enhance the exterior to connect with Wallace Bowl and increase the deck size.

Resident Piper Rothschild said while there is no formal expansion planned for the Lakeview Center, the renovations will increase event capacity and affect parking and congestion around the park.

The park district allocated funds in its 2021 budget for Lakeview Center renovations; however, Board President Mike Murdock pointed out budgeted funds do not have to be actualized.

The facility’s renovations are amid a review process that includes community feedback through a survey, dedicated webpage and future open houses.

“Much like the Gillson Comprehensive Plan, although on a much smaller scale, we will collect input and feedback,” said Julia Goebel, the chairperson of the Lakefront Committee, which plans to meet on Aug. 23 or 30, she said.