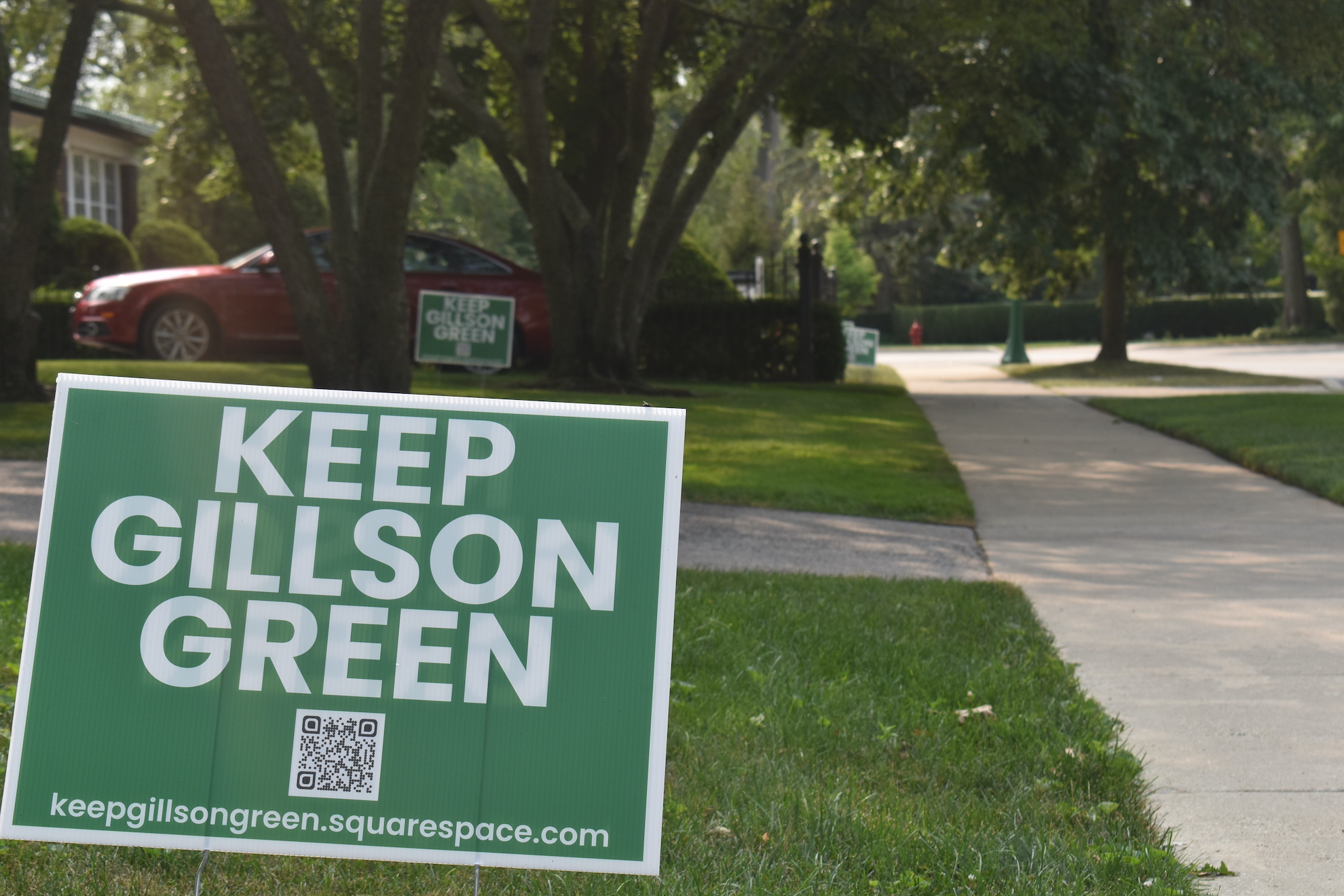 There is plenty to see as you wind along Sheridan Road in the North Shore.

This summer, travelers of the thoroughfare had something new to look at: dozens of green yard signs reading, “Keep Gillson Green.”

For a three-block stretch in east Wilmette, nearly every lawn hosts one — or more — of the signs, which are an effective marketing tool for the grassroots group of Gillson Park advocates.

Mary Shea is a 44-year resident of Michigan Avenue, which abuts the park to the north, and she is one of Keep Gillson Green’s organizers and most prominent voices.

“We are trying to inform citizens by website, by yard sign, flyers, a Change.org petition,” Shea said of the group’s mission. “It is building incrementally among the citizens. We suggest action citizens can take after they find out and develop an opinion.”

Keep Gillson Green — which one member called a “kitchen-table” group developed by a dozen or so Gillson Park neighbors — has butted heads with the Wilmette Park District over its in-development Gillson Park Comprehensive Plan, which will be the roadmap for future improvements at the beloved lakefront park.

In regard to the plan, park officials are gathering resident feedback on four concepts first presented at an April Park Board meeting. The concepts include numerous renovation ideas, none of which are guaranteed, according to park officials.

The concepts have proven to be a lightning rod, with many residents reacting strongly to individual ideas or whole concepts. In response, the park district debuted a website specific to the comprehensive plan and released on Thursday, Aug. 5, a series of statements in response to what the district sees as misinformed questions and comments circulating in the community.

Park District Executive Director Steve Wilson hopes to quash the notion that decisions have already been made.

“The fact is we simply have not (approved redevelopment plans),” Wilson says in the release. “ … Many of the ideas tested evoked considerable feedback from the public, our board and our staff. The consultants walked away from that exercise with the direction that most of the ideas are not to be pursued.”

With the concepts in mind, Keep Gillson Green is pushing for maintenance of the park’s natural character, such as “trees and open spaces,” its website says.

In that vein, the group opposes the creation of parking or roads within the park, a redesign of the park’s Lakeview Center and anything that results in “park overuse,” such as new recreation.

Shea said that many of the ideas favor recreation to open spaces and she criticized the park district for using Gillson Park as a revenue generator, a strategy that is at odds with historical feedback.

Wilson responded that the district has a responsibility to all factions of the community and attempts to find common ground between recreation and open park land.

In addition to the signs and emails, Keep Gillson Green started a petition on Change.org that accuses the park district of not listening to the results of a failed 2015 referendum and asks the district to “stop unnecessary spending, unsolicited expansion and monetization, unwelcome destruction of mature trees and unwarranted lack of commitment to what’s best for preserving quality of life for Wilmette village residents.”

It had 475 signatures as of press time.

The measures were handily defeated.

In the years since, the district has improved the Gillson Park parking lot and constructed a new beach house, saying both improvements “have been well-received.”

The development of the Gillson Park Comprehensive Plan also occurred post-referendums, and some residents have criticized the district for attempting to pursue the same renovations rejected by voters in 2015.

Wilson said the new plan is built on resident feedback, much of it collected in 2015.

“While some aspects (of the 2015 and current plan) will be the same, such as continued need for road and sewer repair, other aspects may be very different because fresh conversations with our community will drive many aspects of this plan,” he said in the release.

Wilson said that some upgrades are necessary, such as road and sewer repair, while other ideas come from residents and yet others are new thoughts that are no sure thing.

Either way, Wilson said, a plan for long-term improvement is vital.

“The Park District feels it would be best to take a more comprehensive look at the entire park, create an overarching plan, and then implement the plan over time with the roads and sewers being the first work completed,” he wrote in the release.

One of the most-criticized ideas was to add upward of 100 parking spaces inside the park. That idea — after feedback from residents, staff and commissioners — has been rejected, Wilson said; however, the district is seeking feedback on parking in and around Gillson and how it can be improved.

The district is also reviewing renovations for the Lakeview Center that could include a new deck but will not include expansion of the facility, Wilson said.

Keep Gillson Green is also concerned about the removal of as many as 90 mature trees. Wilson told The Record that an arborist originally concluded that 73 trees in Gillson needed removal because they are at or near the end of their life cycles. That number has been updated to 58, Wilson said.

Seventeen other trees may need removal if certain renovation ideas come to fruition, he said.

In the release, Wilson addresses numerous other concerns and questions he said he often fields from community members.

Ancillary to their hopes to preserve Gillson’s natural spaces, Keep Gillson Green wants to ensure that residents have their say.

In its materials, the group urges residents to contact park district staff members and commissioners with their concerns and to participate in district outreach efforts, such as surveys, open houses and board meetings.

“We are trying to raise awareness to fellow Wilmette residents about the plans that the Wilmette Park District has been developing for the park,” said Laurie Farrell, a Keep Gillson Green member and resident of Michigan Avenue. “Essentially we just want people to know the extent of the plans, the cost of plans, and we recognize those plans are in evolution.

“Since this isn’t going to face a referendum … where it ends up with a vote, … people just basically have to engage with the Park Board.”