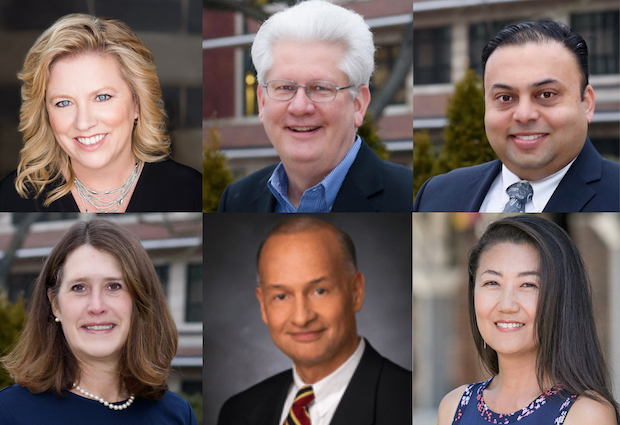 Amid a tumultuous year, New Trier High School District 203 will soon be governed by at least three new school board members, and voters will decide them by April 6.

Six candidates are vying for four open seats on the district’s board of education, while three incumbents — Greg Robitaille, Marc Glucksman and Carol Ducommun — are not seeking re-election.

Four of the candidates — incumbent Keith Dronen, Kimberly Alcantara, Avik Das and Sally Tomlinson — are running as a slate selected by the New Trier School Board Caucus. (Find their campaign website HERE.)

Two other newcomers, Dr. Chadwick Prodromos and Julie Cho, round out the ballot.

The Record invited all six candidates to interviews with Editor in Chief Joe Coughlin. (SKIP TO QUESTIONS).

The caucus slate accepted and opted to be interviewed March 16 in a group setting; however, each caucus candidate gave individual answers.

Cho, whose candidate site is here, accepted and was interviewed Monday, March 22.

Prodromos, who does have a campaign website, initially accepted but withdrew after hearing a list of topics to be covered: COVID-19 response, staff-administration relationship, inclusivity and capital projects.

Prodromos, an orthopedist, is running because the board needs “COVID-19 medical expertise,” he said. Read more on his campaign website.

A forum with all six candidates was presented by the League of Women Voters of Wilmette and the Wilmette Public Library on Saturday, March 20. The LWV will soon post the video and features profiles of all the candidates on its website.

A second forum was held Sunday, March 21, by New Trier Neighbors, a group affiliated with Parents of New Trier, which advocated that the high school’s 2017 Seminar Day — titled “Understanding Today’s Struggle for Racial Civil Rights” — focused too heavily on white privilege and did not feature conservative voices. The caucus-slated members chose not to participate.

Below you can listen to answers from the five candidates interviewed by The Record. You can also use the shortcuts to jump to any question.

(Editor’s Note: In some occasions, the addition of context or fact-checking was necessary. Those notes are made near the appropriate responses.)

(Julie Cho’s introduction was submitted via email, as it was inadvertently omitted by The Record during the recorded interview)
JULIE CHO: I am a parent of New Trier student. We have three school-aged kids, with my oldest as a freshman at NT. We moved to NT from the city when our kids were old enough to go to school. We were not impressed with Chicago Public Schools, and we are believers in the public school system. We specifically picked NT district because of NTHS. So, I want to make sure NT stays as a place of academic excellence. I have learned that NT ranking has fallen significantly over the years, and I was very frustrated by the way NT board has handled the pandemic. It is affecting the kids, families tremendously in a negative way. I feel the current board is not representing the students, families and residents as they should. The board represents the students, families and the residents. There needs to be more transparency in their planning, and there should be more open communication, and the residents wishes and will need to be better reflected on the board’s decision making. I have an MBA, master of public policy in healthcare policy and administration, and a M.A. in social work all from the University of Chicago. I also have a B.A. in biochemistry from Case Western Reserve University. All my working life, I have been in roles where I have to identify issues and come up with solutions for all parties involved for large academic medical centers, such as the University of Chicago Medical Center, and Lurie Children’s Hospital. The pandemic helped me see we need a board that can really listen to its constituents and work with the constituents to resolve the issues. (The) Board’s constituents are the students, families and the residents in the district, including those who do not have children at NTHS.

What grade would you give the response of New Trier to the COVID-19 pandemic and what if anything would you change?

(Fact check with New Trier D203 responses: 1. Cho: “When students go to class in-person they are still on Zoom; D203: About 2 percent of teachers [10 of 407] are working remotely in the fourth quarter of this school year and teaching via Zoom. Zoom is also used for students who have opted for virtual learning. 2. Cho: New Trier teachers are not protected with a barrier/Plexiglas; D203: New Trier teaching stations are equipped with Plexiglass shields.)

Some NTHS staff members have criticized the district’s handling of the pandemic. Do you believe any frustration among staff will linger and if so, how can the board remedy that?

(Reference to anonymous student-story Instagram account) Does New Trier need to improve its inclusion culture, and if so, do you have specific ideas on how to do so?

(Fact check with New Trier D203 response: 1. Cho: Students recently brought up sexual violence on campus to administration; D203: District administration has not been made aware of any on-campus sexual assault in at least the past two school years.)

The local group New Trier Neighbors hosted a town hall in which you — members of the caucus slate — did not participate. Why?

(As referenced by Alcantara, in a newsletter, the New Trier Neighbors criticized a new Illinois education law called the Culturally Responsive Teaching and Leading Standards)

You (Julie Cho) manage a political action committee, Our America, that has given funding to Locke Consulting Group, run by you and your husband Brian Locke. Has this money helped you in any way in this campaign?
(Follow-up questions asked and answered within conversation)

In terms of bell schedules at New Trier, are you a supporter of the block or periods format?

What is your final message to voters?

The Record is a nonprofit, reader-funded news site. Our public-service journalism, including all local-election coverage, is free for all to read. 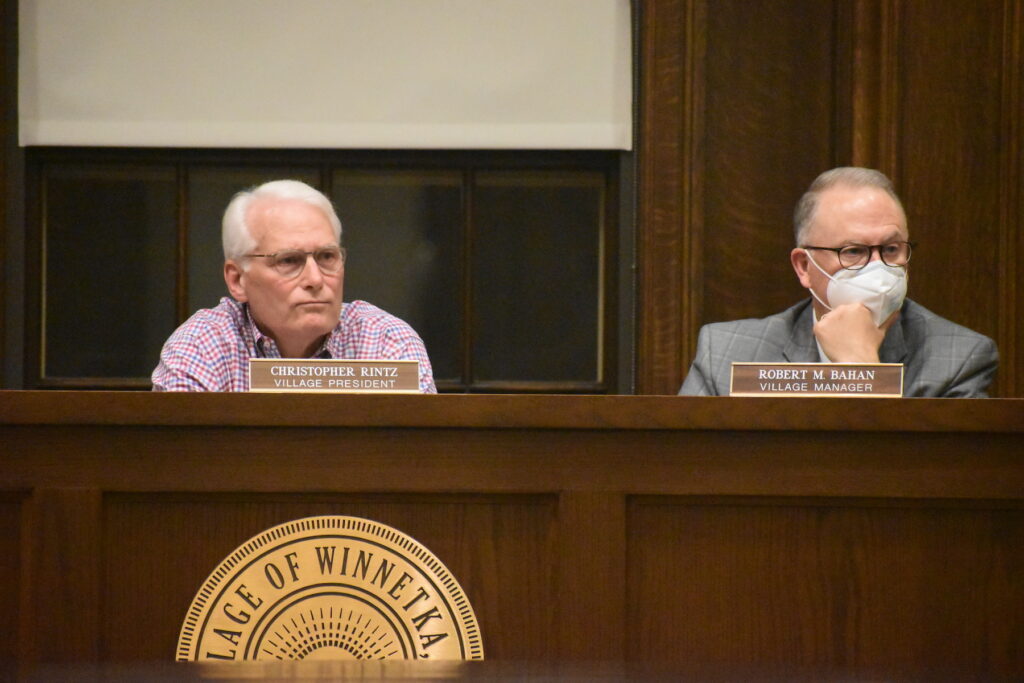 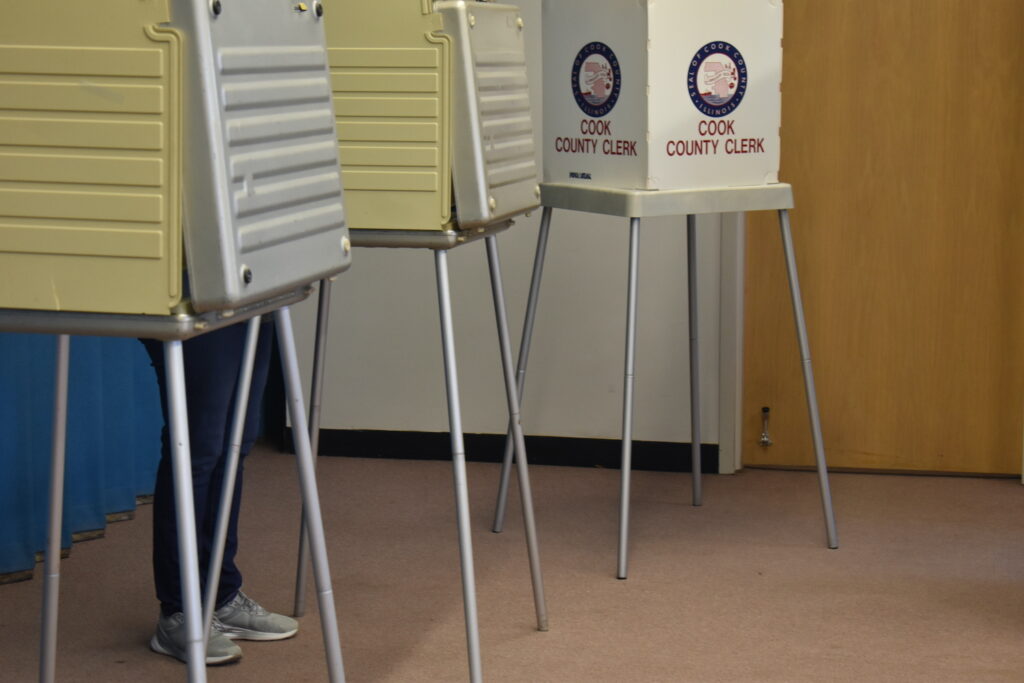