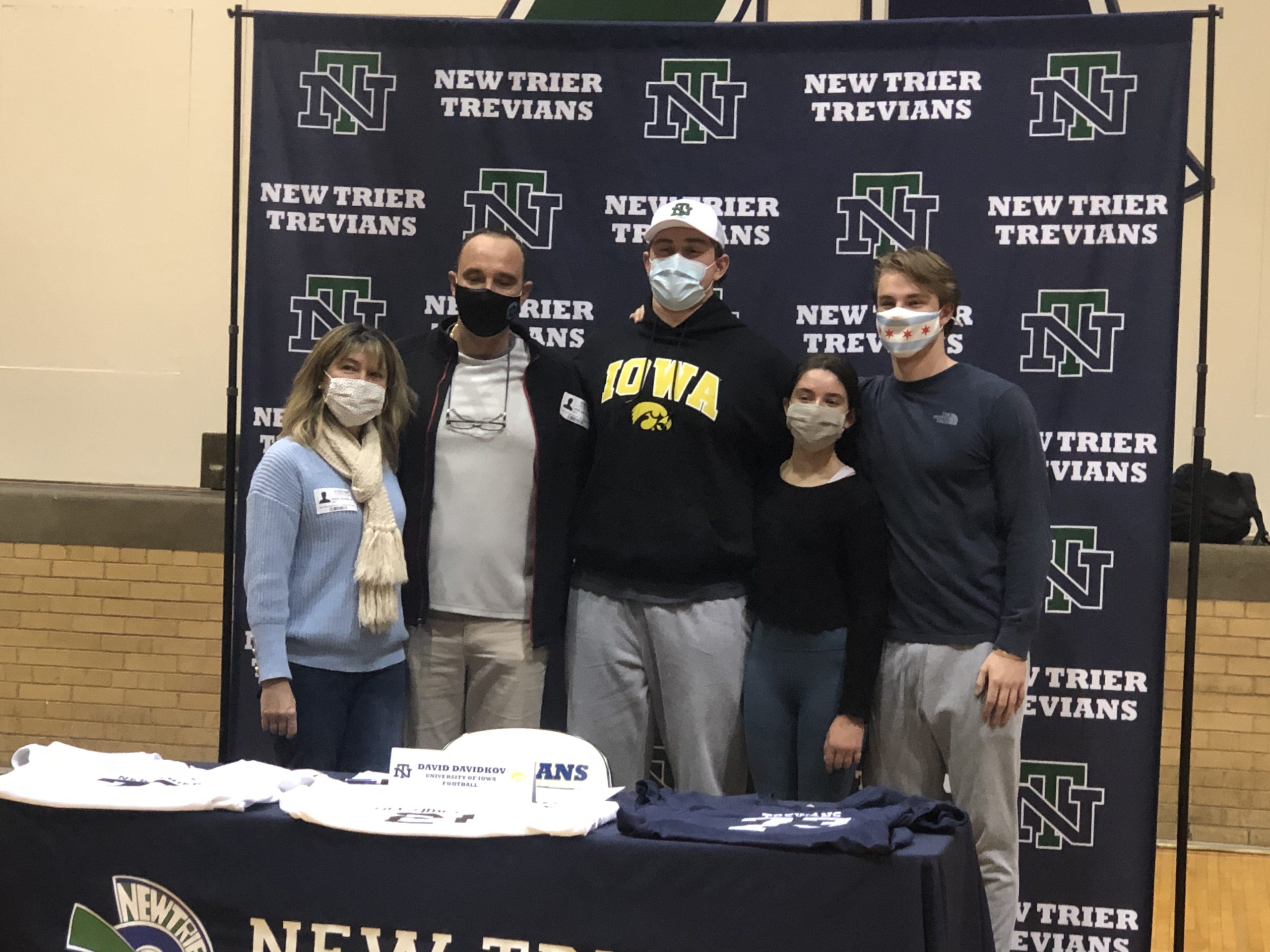 It was no secret where the senior New Trier and Loyola Academy football players were going to play football next year. But that didn’t diminish the celebration of signing day on Wednesday, Dec. 16.

• David Davidkov, New Trier
College: University of Iowa
Position: Offensive line (tackle)
Measurements: 6-6, 285 pounds
Coach Brian Doll (on Twitter): “Watching the growth from freshman year of @davidkov_d till today when he signed with @HawkeyeFootball has been amazing. @newtrierfb is very proud of all you have accomplished and can’t wait to see what comes next. Today you have accomplished one of your dreams! Keep Going!”

• Josh Kreutz, Loyola
College: University of Illinois
Position: Offensive line (center)
Measurements: 6-2, 275 pounds
Coach John Holecek: “Josh is a three-year starter and elected team captain by a vote of his peers. He is a smart player who sees the whole field and makes all of the calls. He has played all O Line positions, finishes every drill with maximum effort on each one, and a great teammate who leads by example. No one who has seen Josh play in practice or a game would ever question his competitiveness and dedication to his sport.”

The Record’s coverage of Kreutz being selected to the Polynesian Bowl.

• Liam Conaghan, Loyola
College: Eastern Illinois University
Position: Outside linebacker
Measurements: 6-3, 235 pounds
Coach John Holecek: “Liam is a three-year varsity player having been brought up as a sophomore for Loyola’s 2018 8A State Championship season. Liam is an extremely physical OLB who is equally effective against both the run and pass and was elected by his teammates to serve as one of four varsity captains for his senior season. He is an aggressive and determined defensive leader who has matured into a great role model for his teammates. Simply put, Liam is an old-school throwback football player and great competitor.”

• Logan Lindeman, Loyola
College: Colorado State of Mines
Position: Tight end/Outside linebacker
Measurements: 6-3, 230 pounds
Coach John Holecek: “Logan is the son of the weight coach and it shows. As the strongest player on the team, Logan is devoted to improving his body through hard work and a disciplined diet. Because of these physical attributes he will help his team win the line of scrimmage battle, whether on offense or defense. Logan’s mental aptitude is another asset as he moves on to become an engineer in college and no doubt impress his coaches with a thorough understanding of offense and defensive schemes.”

• Perrion McClinton, Loyola
College: Indiana Wesleyen University
Position: Wide receiver/Athlete
Measurements: 6-3, 185 pounds
Coach John Holecek: “Perrion is a smooth athlete and versatile football player with tremendous ability to anticipate a defender’s movements and finish his route as a wide receiver. His dedication to studying film and seeing the game from a quarterback’s perspective also sets him apart from most wide receivers. His skillset should make him a dangerous threat every time he touches the ball, and his willingness to block will help his teammates become larger threats. With an entire off-season only devoted to wide receiver, we expect his best days as a football player are ahead of him.”

• Brandon Svets, Loyola
College: Harvard University
Position: Defensive end
Measurements: 6-5, 230 pounds
Coach John Holecek: “Brandon Svets possesses all of the traits a coach looks for in a player. He has the rare combination of size, length and athleticism. A tireless competitor with outstanding work ethic and high football IQ. He’s been an outstanding student in the classroom and on the field. I have no doubts that he will have a tremendous impact on the Ivy League throughout the next four years.”

• Cooper Tamisiea, Loyola
College: Colby College
Position: Offensive line (tackle/guard)
Measurements: 6-2, 260 pounds
Coach John Holecek: “Cooper is a two-year starter who plays multiple positions on the OL. Cooper cares about football and his teammates and shows it with his emotions and effort. He has great feet in pass pro and is always that determined player who gets the most out of his ability. Any coach would be lucky to have a team full of Coopers. He is the player who is always doing the little things and figuring out anyway to get himself and his team better.”

• JT Thomas, Loyola
College: Denison University
Position: Quarterback
Measurements: 6-0, 185 pounds
Coach John Holecek: “JT is a positive young man with strong leadership skills demonstrated by his election as team captain. He waited for his turn and took advantage of the opportunities presented to him. In this crazy ‘off-season’ he is at every workout, always trying to get better. Denison will be getting a determined leader and a maturing athlete who is getting better and better because of his work ethic and overcoming injuries or any other obstacle in front of him.”

• Vaughn Pemberton, Loyola
College: Ball State University
Position: Running back
Measurements: 6-0, 205 pounds
Coach John Holecek: “Big, strong and athletic are just a few of the words I would use to describe Vaughn. He’s a power running back with break-away speed. He’s a matchup nightmare on the field. It was great being able to coach Vaughn the last couple of years, and Ball State is very lucky to have him.”

Editor’s note: All quotes included in this story from John Holecek, Loyola Academy head football coach, were obtained and published by Loyola Academy.