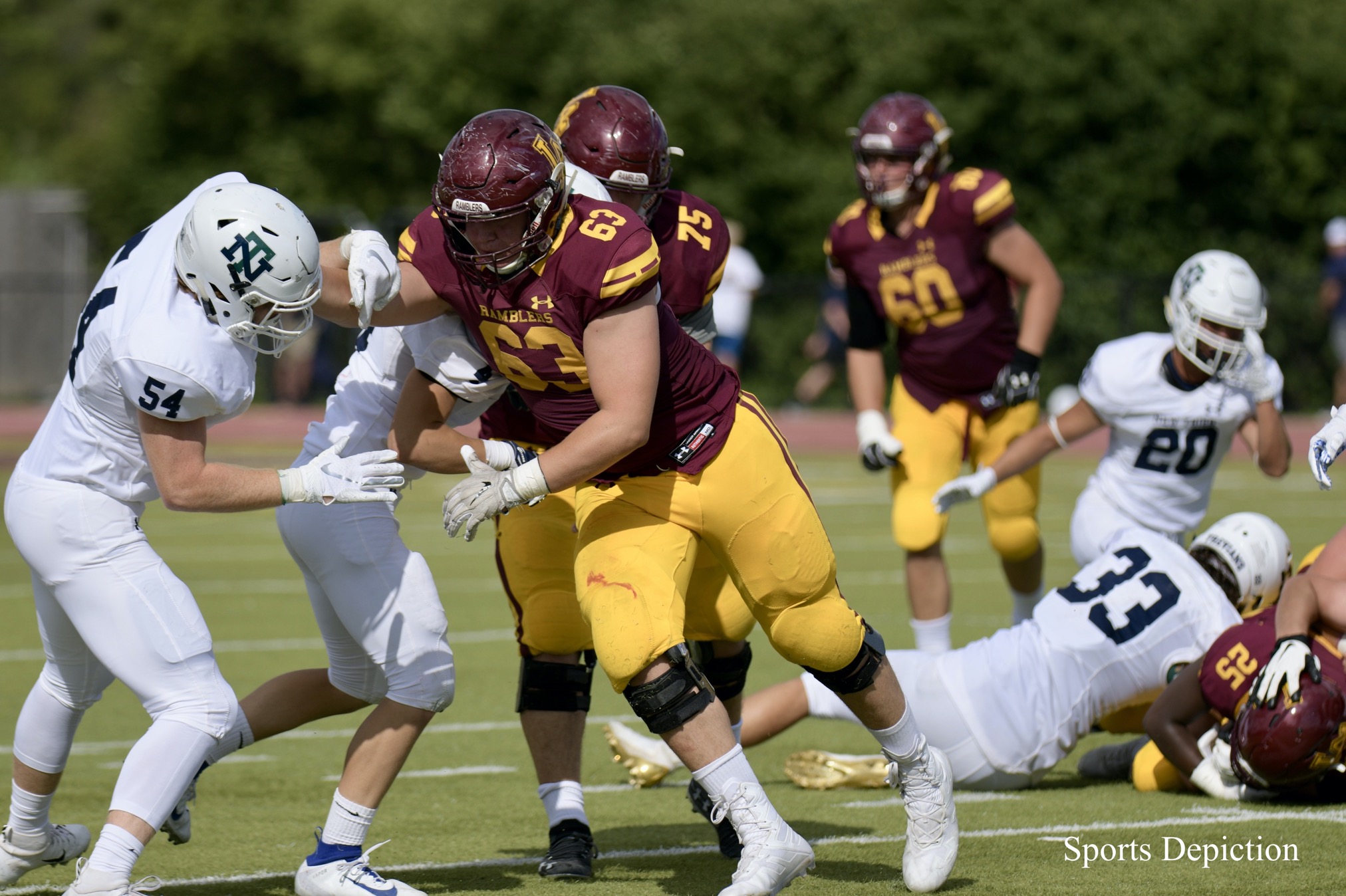 The recruiting process was far from normal for Loyola Academy senior Josh Kreutz, but he's happy with how it all ended. | Margo Grogan/Sports Depiction

Some high school athletes go all-out when it comes to their college announcement.

Whether it’s picking a hat in front of a packed high school gym or filming a video to let the world know what’s next, some athletes like the pomp and circumstance.

The COVID-19 pandemic took away the opportunity for a big reveal, but that was fine with the Loyola Academy football senior and son of former popular Chicago Bear, Olin Kreutz. None of that fit his laid-back style. So when he announced his commitment to sign with the University of Illinois at Urbana-Champaign, in July, he was just happy to have made a decision.

“I just knew that I wanted to play college football,” Kreutz said. “It was definitely weird, but then I felt comfortable going to Illinois and I’m really excited to be committed there. It couldn’t have gone better actually.”

The recruiting process was far from normal, even if Kreutz was happy with how it ended. Ranked by 247Sports.com as the 30th best player in the state of Illinois in the class of 2021 and the 16th best center in the nation, the Rambler started to garner interest from colleges after his junior season.

Northern Illinois University offered first in late January, followed by five other schools before the world all but shut down because of the coronavirus. The University of Memphis made an offer in June, but Kreutz waited to make a decision.

Illinois’ coaches continued to reach out throughout the spring and summer, helping Kreutz get to know the Illini staff, albeit from afar. The center was already very familiar with Illinois head coach Lovie Smith after his father played under Smith for the Chicago Bears for seven seasons.

Kreutz was excited about what he could accomplish under Smith and the Illinois coaching staff.

“I just felt comfortable with the coaches and the school,” Kreutz said. “I wasn’t really rushing it, so when I felt ready, I made a decision.”

At 6-foot-2 and 260 pounds, Kreutz might be a undersized for a Big Ten lineman, but Loyola coach John Holecek watched Kreutz’s intelligence and dedication to the game grow since he started for the Ramblers his sophomore season.

He watched the lineman evolve both physically and mentally through his dedication to the weight room and the playbook, while leading his teammates by example —  a trait his coach knows will help him adapt to playing collegiate football.

“He’s passionate and intelligent, he loves what he does and does it well to the best of his ability,” said Holecek, who was an All-Big Ten player at Illinois from 1990-94. “He doesn’t do anything halfway on the field, he’s full-speed and wants to win. He’s intelligent, he works on his technique. I don’t know how you can get a better teammate.”

He’ll also have national exposure before he arrives in Champaign. Kreutz was surprised in August when the Polynesian Bowl committee announced his selection to play in the 2021 game in Hawaii.

Being named to any national game would be an honor for a high school player, but this game hit close to home for Kreutz.

“I was very excited because my whole family, my mom and dad’s side, grew up in Hawaii, so I really wanted to play in front of my family,” Kreutz said.

Though life is still not back to normal, there are some signs of normalcy. Kreutz is going to Loyola’s campus once a week for classes and the team has started practicing recently to get ready for the season.

The IHSA’s decision to move the football season to the spring means the Ramblers don’t have games to prepare for in the near future, but that hasn’t stopped Kreutz from improving his skills. The senior and his teammates spend plenty of time working hard in the weight room, as evidenced by his Twitter feed.

The Ramblers have a tight group, something that’s important to him. He’s already started communicating with his future teammates as Kreutz and fellow Illinois’ 2021 commitments chat regularly in a group chat and share their excitement about their next step.

Kreutz doesn’t expect playing in the spring will impact his transition to collegiate football but no one has been in this position before, so he’s prepared to roll with the punches. But before they get there, there’s still a senior season to play. Nothing has gone according to plan but that won’t stop Kreutz and his teammates.