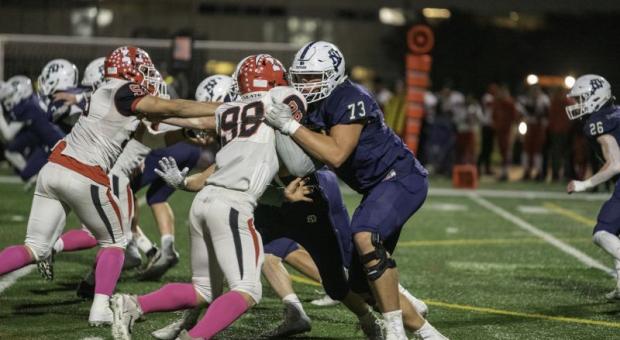 David Davidkov, pictured blocking A Maine South pass rusher as a junior, will enroll early at the University of Iowa.

Learning has been an essential part of David Davidkov’s development into an All-America football player.

Davidkov said it is time for education to continue at the next level.

The senior offensive lineman will graduate early from New Trier High School and enroll at the University of Iowa in January, missing the Trevians football season that is scheduled to begin in February because of delays related to the COVID-19 pandemic.

“It’s definitely really hard for me to let it go,” Davidkov said. “At the end of the day, I really want to go to Iowa and I just see more benefit in that for me.”

Then, in August, when the football season was threatened and eventually pushed to the spring, Davidkov made up his mind and began the process.

“It all led him to believe at a point that that was the decision that was going to be best for his future and I supported it,” Doll said.

Davidkov, who is 6 foot 6 and 285 pounds, is a four-star recruit (both by Rivals and 247Sports) who committed to the Hawkeyes in April.

As a sophomore, he was a starter on a senior-heavy roster that finished the season 7-2. Davidkov quickly became a standout, Doll said, and got the attention of college programs.

“I remember Jake Moreland (a coach for Western Michigan) asked him what he loved about the game,” Doll recalled. “I’ll remember his answer for the rest of my life, he said: ‘Football is a team game and I love that, but what I find different is I have an individual battle in front of me every play. I feel like I have to dominate the person. Every single play I try to put the guy on the ground.’

By the following year, Davidkov was the top offensive-line recruit in the state with a stack of offers on the table, including one from Iowa.

Also in the spring, Davidkov was named to the All-American Bowl, an honor granted to just 100 student-athletes in the nation.

Davidkov was featured on the series “Road to the Dome” that was broadcast on the NBC Sports YouTube Channel on Wednesday, Nov. 25. In the episode, he received and tried on his All-America jersey.

While Davidkov cannot control the pandemic that has interrupted his senior year, he can control what he does with the extra time.

It was not easy at first, but once he found his footing, Davidkov said he’s been using that time to his advantage, both physically and mentally.

“(With training), I started to get creative, doing some jump rope, me and the linemen would push cars around,” he said. “It’s good endurance and stretch and movement for lineman.”

“One thing, I have a lot more time to myself than ever before, so I’m doing things I wouldn’t normally do,” he said, “reading for fun, not just for school, just trying to get closer to God and more faithful. I took time to do that and grow mentally, rather than shrinking.”

Soon, in less than two months, much of that time will belong to the University of Iowa football program.

“I’m excited,” he said “It’s gonna be hard to let go of all the memories at New Trier and all my family here. But I’m definitely excited for my next chapter of life.