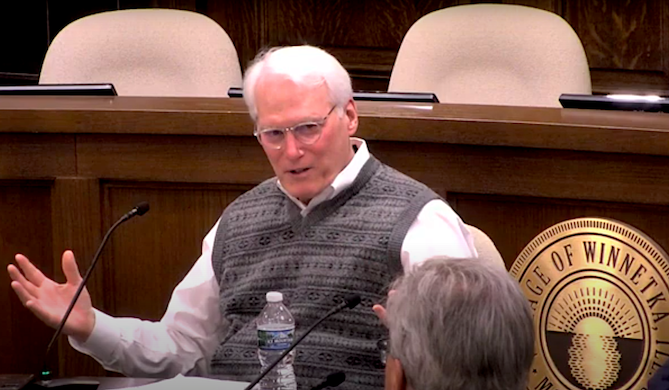 The Village Council informally agreed to develop an ad hoc committee with a goal to increase and improve public education regarding gun storage and safety.

Village President Chris Rintz lamented what he called a “feeble attempt at trying to do something,” but added that with the state of the issue in Illinois, including pending litigation and legislation, municipalities have few options to effect change.

“This is probably the most frustrating subject matter I’ve ever dealt with on village council because there aren’t any real clear answers. There aren’t any great ideas,” Rintz said. “It is locked up in constitutional law at the end of the day and we’re only a town of 11,000 people and don’t have the bandwidth or horsepower to make a real difference.”

Rintz said that any new gun regulations the village adopted would be “a statement” rather than effective policy.

The special council session was a sequel to an August meeting called by the village in the wake of the July 4 mass shooting in nearby Highland Park. During the August listening session, trustees heard from nearly 20 community members urging the Village to take measures to combat gun violence.

Trustees told the community it would return in the fall to work through specific ideas. The followup meeting was set for Nov 10 but had to be postponed when multiple trustees became ill.

The rescheduled meeting on Dec. 13 began similar to the August session, with Village attorney Peter Friedman providing an overview of firearm regulations in the village and the state, also adding recent U.S. Supreme Court considerations.

Friedman explained, as he did in August and again in a pre-meeting memo, that Chapter 9 Section 12 of the Winnetka code states — among other things — that gun sales and the discharge of firearms are generally prohibited in Winnetka; however, ownership of assault weapons is legal, but the weapons must be properly secured and cannot be carried in public.

Winnetka, he said, does have the flexibility to ban assault weapons by amending its code related to a local safe-storage law passed in 2013. The Village of Deerfield did just that in 2018, and its assault-weapons ban has been challenged but upheld by Illinois courts.

Friedman also suggested that the village could team with the county to enforce its assault-weapons ban. That option, however, was not endorsed by Winnetka Police Chief Marc Hornstein.

Another suggestion was to increase the town’s fine for breaking its firearm safety laws, but officials said the fine ($750) has never been administered.

Friedman also summarized Illinois House Bill 5855, a measure filed on Dec. 1 by State Rep. Bob Morgan (D-Deerfield), who represents Highland Park, among other northern suburbs. The bill — also known as the Protect Illinois Communities Act and co-sponsored by 40 other representatives — essentially bans the sale and possession of assault-style weapons across the state and raises the age legal gun ownership to 21. The first hearing related to the bill was held Dec. 12.

Moms Demand Action local lead Lauren Harper contributed with the council in the current state of the bill and other initiatives at the state and local level. The momentum of the bill gave village officials pause, as state laws trump local ones.

“This is an incredibly difficult needle to thread,” Horstein said of local gun laws. “A lot of respected law-enforcement professionals are struggling with it as well. … The one thing everybody can absolutely agree upon is we want to do everything we can to prevent anybody, regardless of age, from getting their hands on a firearm (when) they have no business possessing a firearm. In doing that, I do think decisions made at the state level does give you the most meat on the bone.”

Trustee Bob Dearborn, in a statement seconded by his colleagues, suggested the village work on public education of its current laws while following the progress of HB5855.

The council also discussed its options with facilitating more frequent and detailed reporting with local schools, as a way to identify potential gun-related risks.

The idea was rolled into the development of a committee to improve firearm safety education. Rintz said ideally the group comprises leaders from around the community, including local school administrators.

No specific timetable was given on the next steps for the formation of the committee, which the council agreed it will revisit early in 2023.