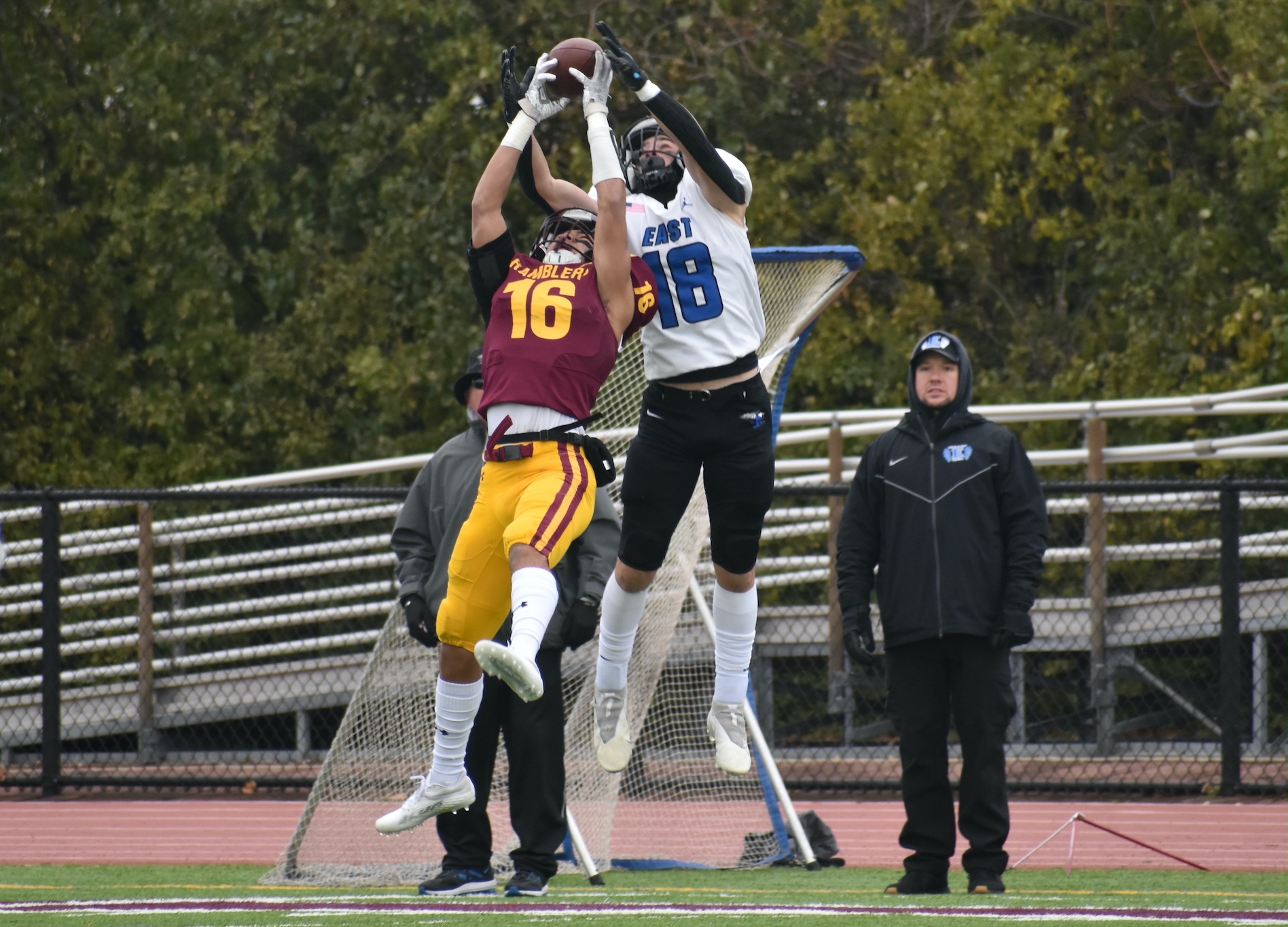 Loyola's Will Maheras and East's Jimmy Curtin fight for the ball during last year's playoff battle between the two teams. | The Record File Photos

A rivalry with 54 miles in between competitors is unusual in high school football, but the Loyola Academy-Lincoln-Way East relationship is a product of success, not proximity.

The cream of the IHSA Class 8A crop has again risen to the top and will compete in the postseason for the fourth time in the last five chances — after previously never meeting on the football field — at 7 p.m. Saturday, Nov. 26, at Memorial Stadium in Champaign.

East is a relatively new school that opened in 2001 when Lincoln-Way District 210 split into two high schools. The district eventually added two more high school schools, causing LW East to compete in Class 7A until 2016 when one of the schools, Lincoln-Way North, closed.

“I was really hoping the federal pandemic money would fund Lincoln-Way North (re)opening and they could separate those kids,” joked Ramblers coach John Holecek in a media call with the IHSA Monday, Nov. 21. “But I said in September that we were going to see Lincoln-Way East. That’s the best team out there. I always thought it was kind of destiny.”

Under Holecek, Loyola has a 83.7 winning percentage (185-36) across 17 seasons, qualifying for the playoffs every season and advancing to seven state-title games with victories in 2015 and 2018.

Lincoln-Way East boasts an 83.9 winning percentage (219-42) in its history — 22 seasons all under coach Rob Zvonar. The Griffins, who have made the playoffs each season, have played in five state championship games, earning titles in 2005, 2017 and 2019.

In the programs’ most recent meeting, Loyola topped LW East 3-0 in a defensive slugfest at LA’s Hoerster Field in an 8A semifinal last season. The Ramblers beat the Griffins 24-16 in a 2018 semifinal in Frankfort, just a year after the Griffins took down the Ramblers 23-14 in the state championship game.

The Ramblers and Griffins, as well as 7A’s Mt. Carmel Caravan, were atop state rankings all of this season and proved why on the field. Loyola finished the regular season 8-1, its only blemish a captivating 42-37 loss to the Caravan in Week 9. The Griffins also dominated their schedule until Week 9, when Bradley-Bourbonnais gave them a challenge; though, LWE pulled it out a 28-21 victory in overtime.

The two teams’ Week 9 contests were the only one-score results in their respective regular seasons. In the postseason, LWE escaped Neuqua Valley 17-14 in the second round, while Loyola’s closest result was a 30-17 victory over Lyons in the quarterfinals. Each team rocked their semifinal opponents, with the Ramblers topping York 30-3 and the Griffins besting Glenbard West 31-7, to earn their places in the championship game.

“There are lots of reasons why this moment is really special,” said Holecek, who added his senior-year team at Marian Catholic did not even make the postseason. “… It’s more thinking about playing for each other and the people who put you in this position, the people who can’t play but wish they could — about being thankful for the gifts you’ve been given.”

Both teams field balanced offenses that have accumulated more than 2,000 yards passing and 2,000 rushing so far this season. The Ramblers’ attack is more balanced with 2,526 passing to 2,510 rushing, and All-State quarterback Jake Stearney has completed 67.8 percent of his passes, 34 of which have gone for touchdowns, for 2,149 yards.

Loyola has only turned the ball over five times on the season.

“That offense, being multi-dimensional with an experienced Division I quarterback behind a Division-I-looking offensive line — with their schemes, downhill power run and wide open spread passing attack, they present you with a lot of problems,” East coach Rob Zvonar said.

East junior quarterback Braden Tischer is also over 2,000 passing on the season and has 21 scores to go with a 67.5 completion percentage — often finding senior Jimmy Curtin (35 catches, 697 yards, 10 TDs).

The Griffins backfield is led by All-Stater James Kwiecinski, who has racked up 1,498 ground yards to go with 26 touchdowns. The Ramblers have had to earn their rushing yards by committee, as Will Nimesheim (596 yards, 7 TDs) and Drew MacPherson (341 yards, 3 TDs) have suffered season-ending injuries. Sophomore Luke Foster has stepped in to gain 468 yards with seven scores in three-plus games as the lead back.

“If we can negate their offensive line, it would be helpful, but it will be hard to do,” Holecek said.

Loyola’s defense has given up 15.8 points per game despite allowing 42 to IHSA Class 7A finalist Mt. Carmel. Michigan commit Brooks Bahr and nose tackle Mickey Konolov lead the defensive line, while Ethan Hogg has emerged as an effective pass rusher from his outside linebacking position.

Out of the secondary, Johnny McGuire is the Ramblers leading tackler and consistently makes plays all over the field, along with linebackers Jake Wetoska, Emmett McCarthy and Colin Scheid. The unit may get a boost on Saturday as defensive lineman Joe Kelly, who was injured early in the season, is a game-time call for Loyola.

The Griffins have allowed an average of 11.8 points to their opponents this year, and as is custom for LW East, give up very little on the ground.

Linebacker Jake Scianna (87 tackles) is one of the state’s best, and David Wuske has racked up 12 sacks coming off the edge for Lincoln-Way East.