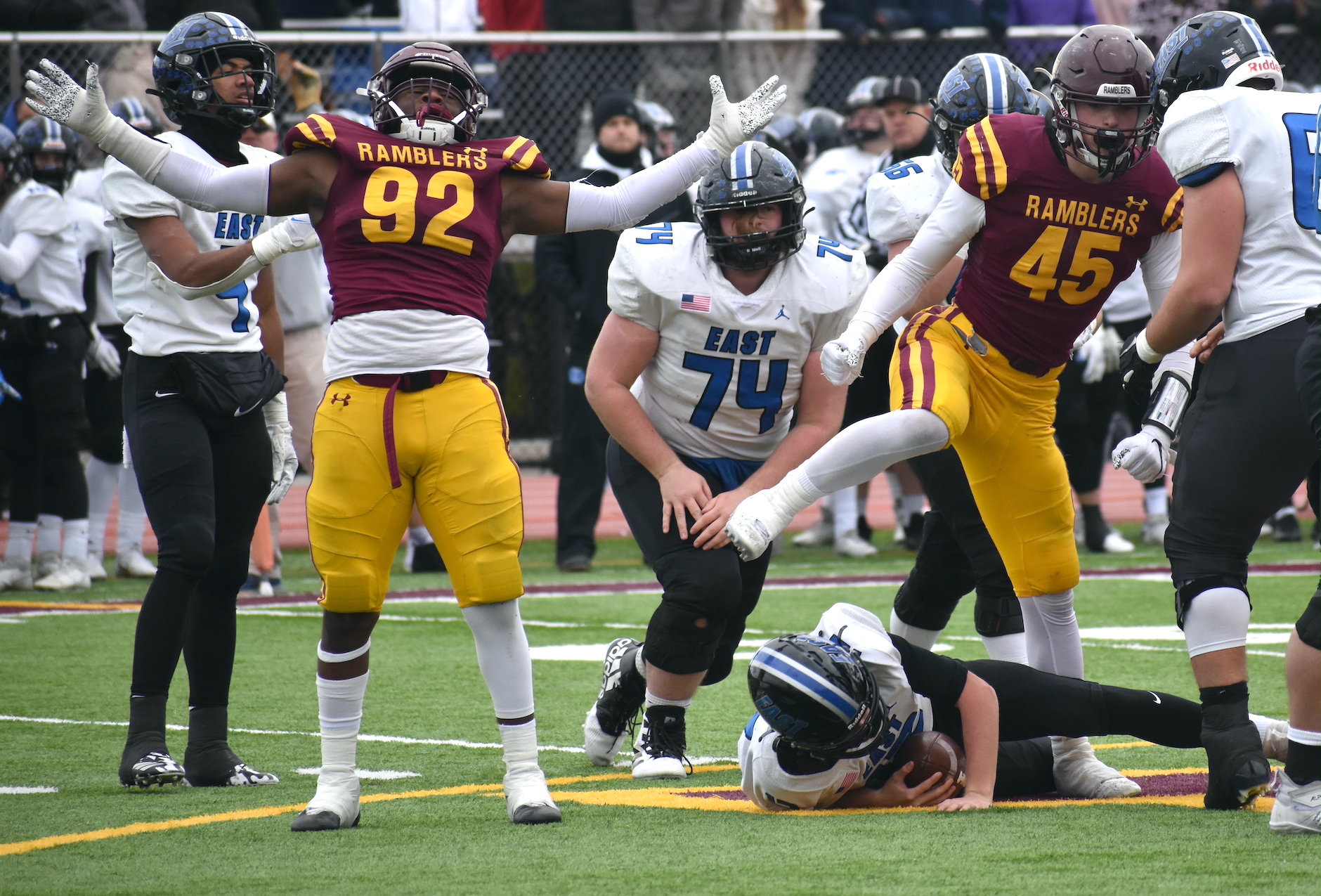 The statistics strongly suggested that the Lincoln-Way East football team was no match for Loyola Academy.

It took a 32-yard field goal by sophomore Mike Baker with nine seconds to play in the first half to lift the top-seeded Ramblers to a 3-0 triumph over the ninth-seeded 2019 state champions on Saturday, Nov. 13, and send them to IHSA Class 8A semifinals.

The outcome of Loyola’s quarterfinal confrontation with the visitors from Frankfort was uncertain until the closing minutes when quarterback and punter Jake Stearney faked a punt and threw a 29-yard pass to tight end Jack Parker in a fourth-and-3 situation at the Ramblers’ 47-yard line.

What coach John Holecek described as “a big, important first down” enabled the Ramblers to kill the clock until time ran out.

“One fake punt was bad; one was good,” Holecek said, looking back on an incompletion on a fourth-and-6 situation at the Griffins’ 49-yard line in the Ramblers’ previous possession.

After the fourth-down failure, a pass completion by Chase Arthur followed by an encroachment penalty gave Lincoln-Way a first down at the Loyola 43.

Arthur’s 9-yard pass to running back Trey Johnson put the ball on the Ramblers’ 46 but left the Griffins 13 yards shy of a first down and, in the face of continued intense pressure, the quarterback’s fourth-down pass was incomplete.

“I definitely felt this was our best game (defensively),” Rushin said. “We were all over them the whole game.”

In Holecek’s opinion, “Mike Williams had a great day; James Kreutz was a disruptive force as usual; and Sam Rushin had another great game,” he said. “We moved Sam from the defensive line (where he played end during the spring season) to linebacker and he has gotten better and better every game.”

The statistics and play-by-play recaps are indicative of the impact the defense had on the outcome.

Arthur was forced to run with the football eight times and was thrown for 52 yards in losses and he only completed four of 13 passes for 52 yards, 32 of which came on a reception by Jimmy Curtin in the second quarter.

Starting in the opening quarter, time and again the Loyola defenders broke through to smear Arthur. On the last play of the quarter, Holden Quinn sacked him for a loss of 3 yards, creating a third-and-13 situation at the Ramblers’ 35, and on the first play of the second quarter defensive back Gabe Gyorgy intercepted the ball at his 4-yard line.

On its next possession Lincoln Way went back on the attack, driving to the Loyola 27 before Kreutz and Rushin collaborated to spill Arthur for an 8-yard loss in a fourth-and-11 situation.

In the third quarter a Loyola errant snap on a punt was recovered by the Griffins at the Loyola 14 but third- and fourth-down sacks of 6 and 7 yards by Rushin and McCabe, respectively, enabled the Ramblers to reclaim the football at their 33.

“At practice this week we were emphasizing how much of a threat their offense was,” said towering lineman Brooks Bahr, who got in on the sackfest early in the fourth quarter. “Their wide receivers are big threats. We knew we had to get pressure on their quarterback. We couldn’t let him make easy passes.”

Holecek characterized his offense as “stagnant” and indeed it was when measured against the prior 11 games in which his team scored an average of 37.9 points.

Nevertheless, the Ramblers were statistically dominant by a wide margin. They controlled the football for 30 minutes 40 seconds, while the Griffins had it for only 17 minutes 20 seconds; they had a 14-5 advantage in first downs; they were 6-for-19 in third-down conversions and 3-for-5 in fourth-down conversions, while their opponents were 0-for-8 and 0-for-3, respectively.

The Lincoln-Way running game consisted solely of Johnson, who netted 62 yards. His only long gain was for 24 yards.

Stearney’s passing was the focal point of the Loyola offense — 19 completions in 28 attempts for 175 yards. He had several reliable receivers: Parker, 3 catches for 61 yards; Jack Fitzgerald, 4-for-34, Danny Collins, 6-for-32; and Spencer Leadbetter, 3-for-31.

Ironically, on the second quarter drive from the Loyola 37 to the Lincoln Way 10 — prefaced by the collaborative fourth-down sack by Kreutz and Rushin and climaxed by Baker’s field goal — the Ramblers got all of their yardage on the ground, thanks to Kreutz and sophomore Will Nimesheim. The biggest chunk of the yardage came on a 33-yard run by Kreutz.

Since late in the regular season, Kreutz has been getting spot assignments in the backfield and, in this game, the bulwark of the defense also was the team’s top runner with 44 yards in 12 rushes. Then came Nimesheim with 11 carries for 41 yards.

But, except for Baker’s deciding field goal, perhaps the most important offensive play of the game was Stearney’s pass to Parker on the fake punt in the homestretch.

“Jake nodded to me in the huddle and it worked perfectly,” Parker said, “just how we drew it up.”

Despite the unsuccessful fake punt attempt that put the Ramblers in jeopardy on their preceding possession, Stearney was confident that this time it would work.

According to Stearney: “They have a very good rush on the punt and we saw early on that they were overaggressive. We had a great game plan.

“But our defense is the reason we won. The sacks picked us up big time.”

Lincoln-Way coach Rob Zvonar agreed that the Loyola defense made the difference.

“They were relentless on defense and they spent a lot of time on the field,” he said. “Our effort was all a coach could ask for. It’s a bit of a coach’s cliché, you ask them to ‘leave it all on the field’ but we did that.”

After winning all six of their games during the unprecedented playoff-devoid spring season necessitated by the COVID-19 pandemic, the Ramblers are going into the semifinals with an 18-game winning streak.

A victory against Lockport would put them in the championship game at Northern Illinois University in DeKalb on Saturday, Nov. 27.