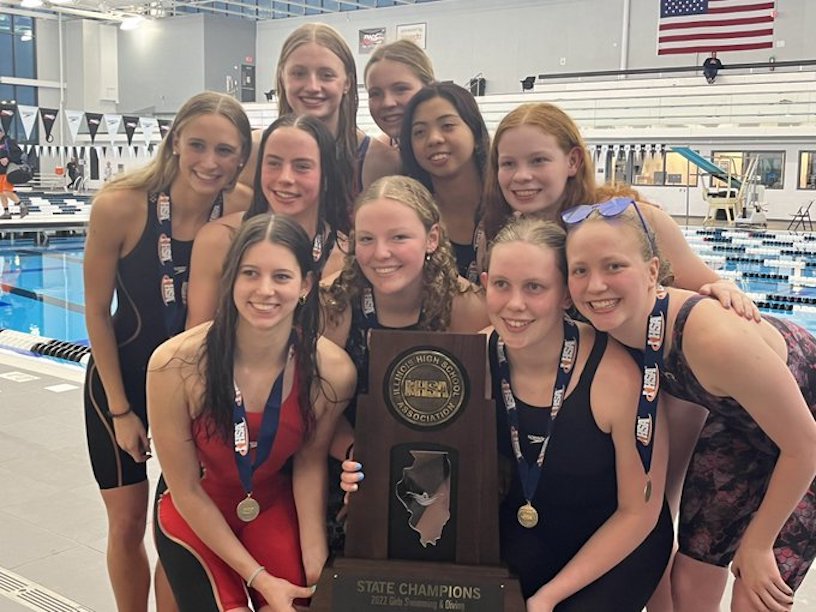 Change is never easy, but in high school sports, it is inevitable.

Following a dominant state-championship performance in 2021, New Trier girls swim and dive bid farewell to more than 30 athletes across the program, including six college-bound swimmers.

“We kind of wondered how the team was going to respond, who was going to step up,” Trevs coach Mac Guy said. “And it was such a different feel from last year. I think our seniors in particular did a great job of just making it fun, and it never really felt like we had to do anything … that we just needed to work our hardest.”

The new faces in the Trevians lineup, including two All-State transfers, joined forces with talented returnees for a save-the-best-for-last performance in the state championships.

New Trier’s first-day times were not good enough for a first-place trophy, but on Day 2, the Trevians en masse surpassed their qualifying times to score seven top-three finishes in 12 events. The improvements were more than good enough to hand New Trier (149.5 points) a second consecutive state title — ahead of Hinsdale Central (131), St. Charles North (128) and Stevenson (123.5) — on Saturday, Nov. 12, at FMC Natatorium in Westmont.

“Going into Saturday, we felt like we could do better,” Guy said. “To come out and win the medley relay right from the start was really amazing. The momentum built from there on out. Some really exceptional performances from our seniors. … They just thad a really calm and confident demeanor the entire time and helped us stay positive and confident so we could close the deal at the end.”

As the meet wore on Saturday, New Trier slipped down the team standings, falling as many as 30 points behind the leader through eight events.

But all was far from lost for the back-loaded Trevians’ lineup.

“Historically, even last year, we are more back-half team,” Escasa said. “So we’ve learned as a team to stay optimistic during the middle stages of meets, like after the 500 (freestyle) to remain optimistic.”

New Trier’s finishes in those four events resulted in 89.5 team points — 60 percent of their meet total (149.5) in one-third of the meet.

“This group has done a really good job of putting their heads down in the late stages of a meet,” senior Charlize Escasa said. “On Friday, we were down and we took notice of that. … With such a short time, less than 12 hours, there are not a lot of drastic changes you can make. At that point, it’s more a mentality thing.

“On Saturday, we just did a really great job supporting our teammates — also a lot of great support from (our fans) — and being grateful for the moment rather than being stressed about the pressure that can weigh you down.”

To her two state titles (medley relay, 100 back), Lenahan — a sophomore transfer from out of state — added a second-place swim in the 100 free, completing the race in 50.88 seconds. Safarikova, another sophomore, finished eighth in that race and added a sixth-place time in the 200 free. Newlands added a 12th-place swim in the 200 individual medley to round out New Trier’s scoring.

The Trevians earned the 16th state championship in program history and sixth since 2010. New Trier won four straight titles from 2010-’13 and seven straight from 1981-’87.