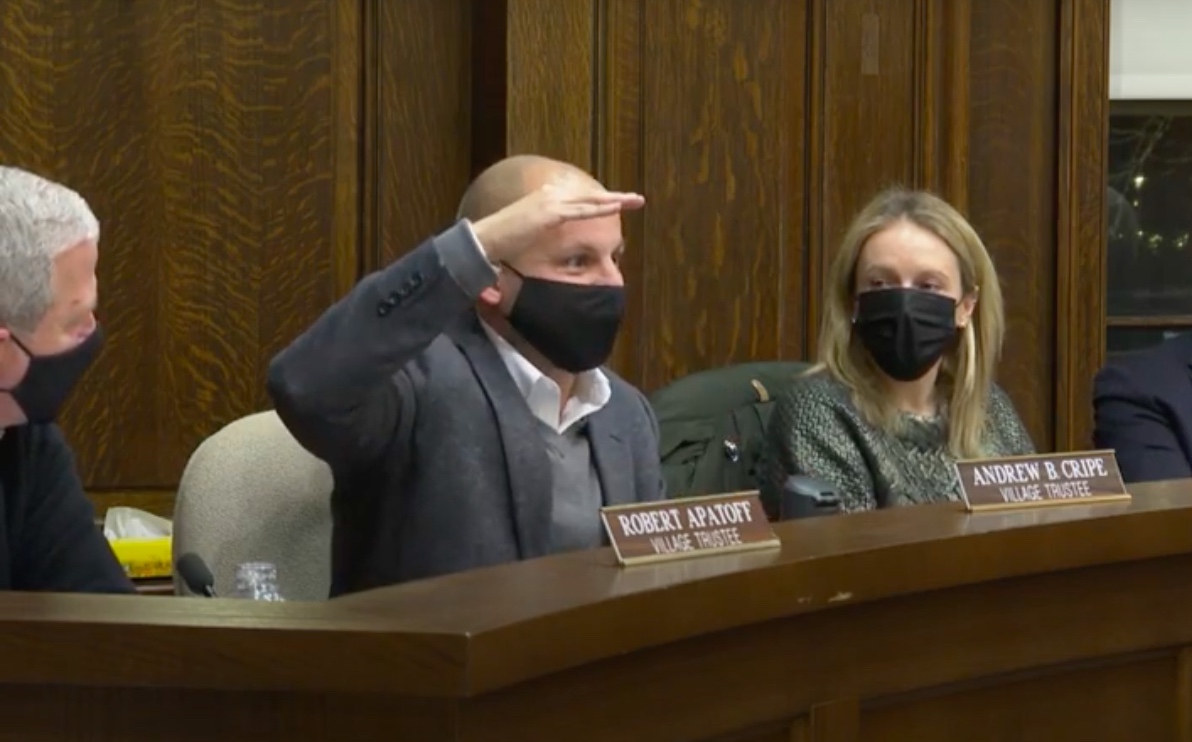 Winnetka Trustee Andrew Cripe talks with the One Winnetka team about the proposal's size on Tuesday, Dec. 7.

(Editor’s Note: This story has been updated on Friday, Dec. 10, with comments from David Trandel, lead developer on the One Winnetka project.)

“No way. Just no way. I will never say yes to (five stories). … Don’t waste your time. (The process) is just brutal; don’t do that to yourselves, don’t do it to the community. It’s not worth it and won’t work.”

Winnetka Trustee Andrew Cripe’s comments were not the only ones of the night, but they were the most notable on Tuesday, Dec. 7, when the Village Council offered its first feedback on the new designs for the maligned One Winnetka development.

With a new partner and architects, developer David Trandel, of Stonestreet Partners, and property owner Romspen Mortgage submitted to the Village of Winnetka a reimagined concept to redevelop the southeast corner of Lincoln Avenue and Elm Street.

The project again features five stories — a ground level of commercial space and four levels of residential units — which is the same number as the original design that was contentiously approved in 2018 after 30 public meetings and then shut down in 2019 before construction.

The height was the crux of Cripe’s criticism, which was shared by Trustees Rob Apatoff and Bob Dearborn.

“I don’t want to waste your time. … It’s too big. It’s too tall,” said Cripe, who added that he lives across the street from the site. “ … It doesn’t show any lessons were learned from the last time. The process the last time was terrible for the town. It was not good. It took a tremendous amount of time and what we heard over and over again is it was the height, it was the mass.”

The Village’s zoning ordinance limits buildings to a height of 45 feet and four stories. To move forward with the current One Winnetka designs, the village would have to approve a zoning exception to accommodate 64 feet 6 inches and five stories.

The meeting was the first in a series of three design-review stages, and after hearing the council’s feedback, the applicant must decide whether to submit a preliminary plan development application.

In a followup call, Trandel told The Record his team expects to follow through and called the meeting and process positive. He added that his team will work with the council to reduce the building’s height.

“The solve has to be playing within the envelope of a four-story building,” he said. “We are not at a point where we want to be antagonistic and we are looking for a speedy resolution and a project everyone can rally behind.”

Trandel said developers are not trying to build a skyscraper, but instead, the number of stories is the result of a financial formula, and with a reduction in height, his team must work to make up revenue in other ways. He said the team is willing to do that.

The original proposal would also need the council to OK other exceptions and special uses in relation to yard and building setbacks and parking, as explained to trustees on Dec. 7 by David Schoon, the village’s director of community development.

The proposed development will replace five buildings on the corner but, unlike the previous iteration, will not include Conney’s Pharmacy at 736 Elm St., according to village documents.

In this version, One Winnetka will include the corner-front building that previously housed Phototronics at 740 Lincoln Ave., but reportedly plans to leave it standing.

The project’s proposal offers a layout for 74 apartments units; however, Talty explained that that number is only a placeholder and developers plan to adjust the details — such as unit volume, types (apartments or condos) and sizes — based on the “needs of the market” at the time of the build.

Talty also addressed the building’s overall height, saying the number could come down from the proposed height, 64-6 across five stories, which was the result of a math problem involving building systems that are difficult to project this early in the process.

After breaking down the design, Talty, who is a Winnetka resident, summarized the project’s fit in the community, saying a lot of people he knows are pivoting to rental units.

“This is a town that really desperately needs something like this,” he said. “The idea of luxury housing in a rental market for our community I think is an important thing. It offers continuity for residents who have lived here a long time and have grown weary of maintaining large homes or paying the taxes associated with them, but yet want to have a toe in the water with their kids, their grandchildren, their club, their church.”

After public comment, during which one resident spoke against the proposal, trustees began by asking the applicant questions.

Apatoff wanted more information about the decrease in parking spaces in comparison with the original One Winnetka — a drop from more than 300 spaces to 158. Talty said studies have shown a decrease in cars per family in metro areas, and the development team believes the 115 underground spaces would accommodate the residential occupants, while the remaining 43 ground-level public spots would serve Winnetka’s downtown.

Project partner John Murphy stepped to the mic to offer a glimpse into the market, pointing to similar developments in Skokie, Northbrook and Oak Brook. Using those projects for context, Murphy predicted that a unit at One Winnetka could cost $5 per square foot, making a 1,200-square-foot, two-bedroom unit cost $6,000 a month.

When it was time for trustee feedback, Cripe led off and was soon supported by Apatoff and Dearborn. For Kim Mancini, Tina Dahlman and Village President Chris Rintz the development’s height was not a dealbreaker; however, they each said the applicant needs to provide a compelling reason for the council to approve an ordinance exception.

Dahlman said downtown Winnetka could use more density so a “daytime population” could “feed businesses” but requested more information on the residential units and a “robust parking study.”

Rintz also pushed for more specifics on the unit mix and sizes and specifically told the applicant to discuss with and listen to neighbors of the location as well as all residents of Winnetka, because a five-story project is not a simple ask.

“You got to go meet with neighbors,” he said. “I am in the Tina camp and am ambivalent about height … but just speaking the words five stories could be a significant challenge. It’s something to consider. There’s going to be a sell job that needs to be done on a community-wide basis and it’s not going to be done in this room. It will be done in living rooms and the community house.”