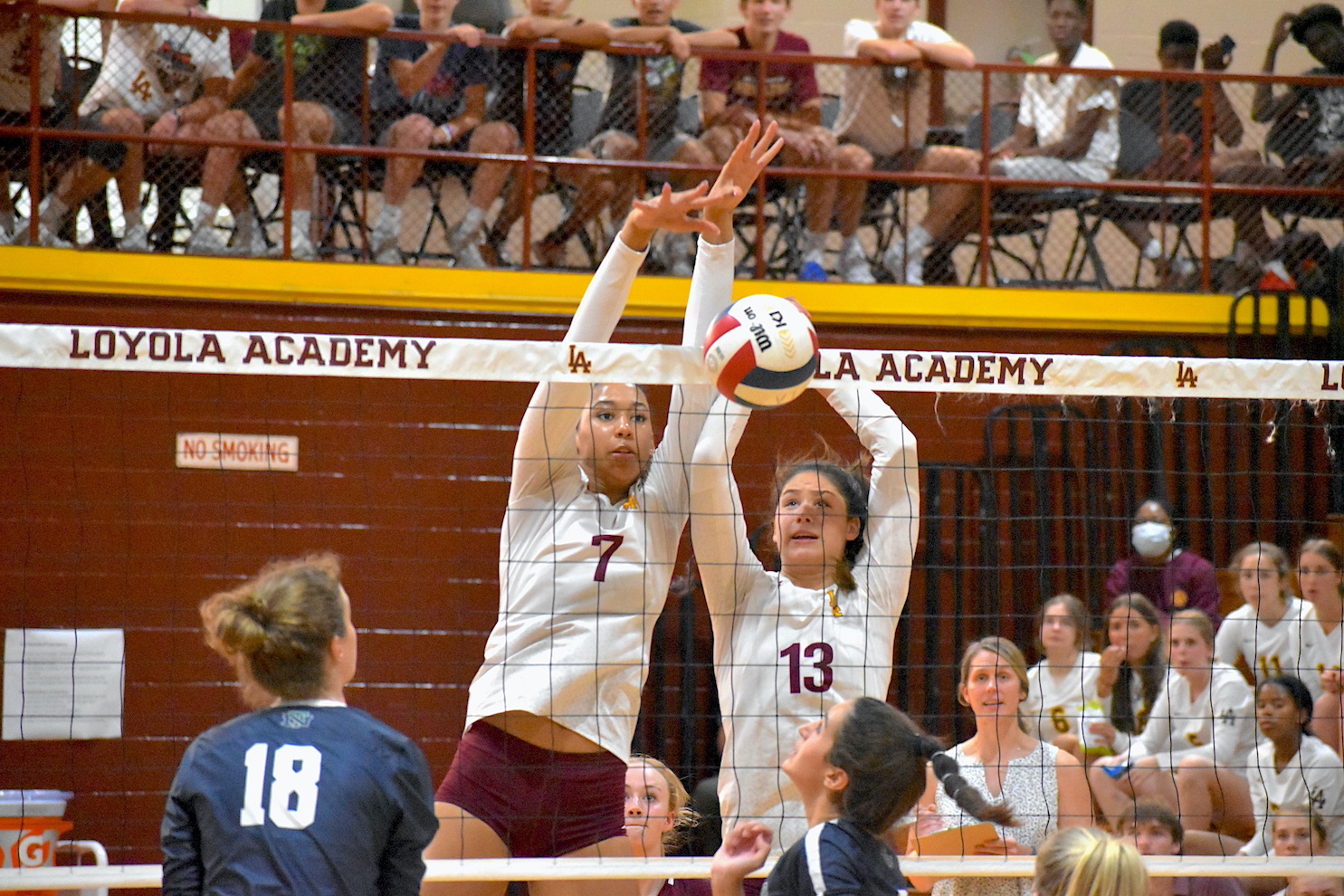 Loyola Academy does, and the potent combination of 6-3 Catherine Burke and 6-5 Ava Bogan — both of whom will collegiately compete at the Division I level — allows the Ramblers to attack inside-out.

“They definitely give us a lot,” Loyola coach Mallory Thelander said of her middles. “High school teams don’t run their middles as much as we do. Usually it’s pin heavy (which refers to outside hitters) at the high school level so I think (they) A. allow us to give our pins a break for a little bit and then when we do run our middle constantly and then run our pin, it gives our pin an opportunity, because the blocker is probably clinging to (the middles).”

Bogan and Burke stymied the Trevians from both sides of the net, combining for 16 kills and 6 solo blocks. They also played a part in five more team blocks as well.

Burke, who is bound for Penn State next season, led the offense with 11 kills but said the imposing block she and Bogan put up is where the game was won.

“We take pride in, as middles, closing the block and making it easier for our defense to read (the attack),” Burke said. “… Getting a block and being able to shut the hitter down is the best.”

Even against the dominating front line, New Trier broke through at times.

Loyola jumped all over New Trier in the first set and started the second set the same way, but the Trevians clawed back in the match, turning a 10-2 deficit into a 19-18 lead.

Sophomore Katherine McGregor had four of her team-high 11 kills in the set, while 6-5 senior Lindsay Umlauf tallied three blocks to help the Trevians even the match at one game apiece.

“I am so proud of our girls,” New Trier coach Hannah Hsieh said. “We have had a lot of changes in our personnel, so I think the girls are doing great and rallying around all the different changes.”

A sectional finalist a year ago, the Trevians are without three setters who saw time on the court last season. Newcomers Alex Belak and Jenny Perkins are working into the position this year.

New Trier’s starting middle, Sophia Gabuzzi, is out of the season with an injury, and the Trevs’ roster features two seniors, seven juniors, four sophomores and a freshman, Calia Cremsacoli, who was called up Thursday evening.

Right side Ana Vetter, who recorded 8 kills against Loyola, is back to lead a potent New Trier attack alongside McGregor, Emma McHatten (5 kills) and Alison Smith (4 kills), among others.

“We have a ton of hitters,” Hsieh said. “We probably have as much hitting power as we’ve had in a while, from almost every position. … We’re adjusting. There has been a lot of adjusting, but you know, they are resilient and they’re not going to make excuses.”

The decisive third set against Loyola was a classic back-and-forth affair.

The Ramblers chased down an early deficit and the teams traded points until they were knotted at 20-20. Once there, the home team found the final burst, rattling off five straight points — capped with an ace from junior Bella Donato — to claim the set and the match.

“We lost to New Trier last year and this whole game we had a lot of fire,” Burke said. “We were coming together as a team and trusting each other. The bench was pretty hyped up, that definitely helped. And we used the crowd’s energy to our advantage.”

The well-traveled Trevian faithful did their best to disrupt the Ramblers, but the home team had plenty of support as well.

The home cooking was very welcome for a Ramblers team that wants to go unbeaten on its home floor.

“Our biggest thing is we have a lot of home matches and we want to defend our house,” Thelander said. “Then, we want to win conference … and just compete in the playoffs. These last two games (including a three-set win against Glenbrook South on Wednesday, Sept. 7) have been playoff-like energy, so we’re hoping that gives us good experience by the time October hits.”