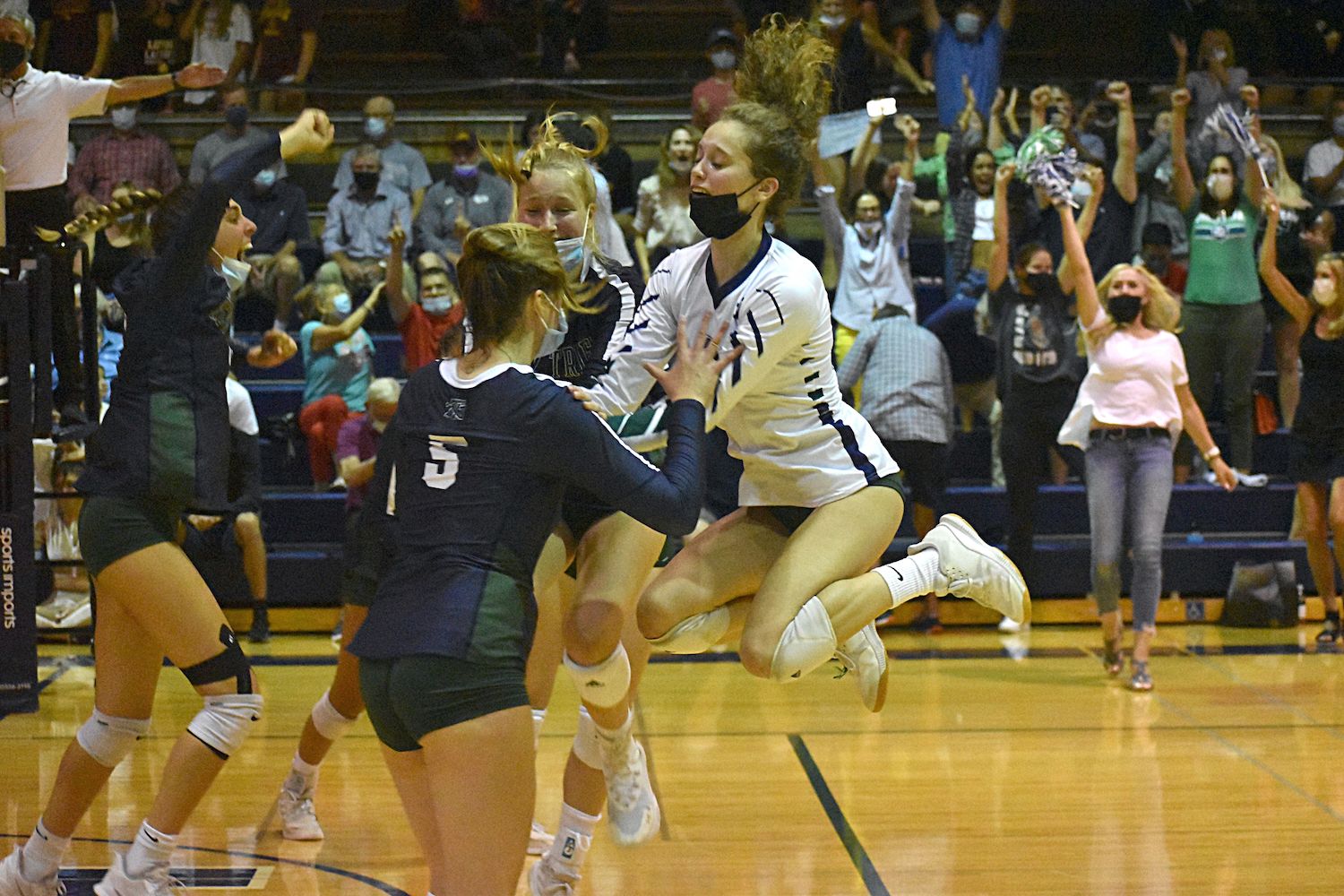 The chants of Loyola Academy’s student section, the Maroon Monsoon, boomed from the rafters of New Trier’s Gates Gymnasium in Winnetka.

In the moment, with the Ramblers volleyball team leading in the third set, the Trevians student section, the Green Team, had no answer.

But senior Cece Burns did.

The All-Conference outside hitter silenced the Loyola faithful and sent the Green Team into a frenzy by leading the Trevians on an 8-2 run to finish off a 14-25, 25-21, 25-22 comeback victory over the previously unbeaten Ramblers on Friday, Sept. 10.

“We just put our hearts on the court and did what we needed to do,” Burns said.

Burns had eight of her 11 kills in the final set, including tallying four of her team’s final seven points.

The game-clinching flourish came about one hour after Burns was substituted out of the game in the first set when the Trevians were struggling to find rhythm.

Upon re-entering for the second set, Burns had a message for her team.

That’s precisely what happened, as Burns’ first kill was New Trier’s first point of Set 2 as it jumped out to a 14-5 lead.

Early in that set, the Ramblers — down 2-1 — had an injury scare when senior middle Molly Power limped off the court grabbing her ankle.

“That’s when the tide started shifting,” she said. ”We got frantic because we didn’t have her in there, and the whole second set kind of fell apart from there. And it kind of transferred into the third set.”

Still, Loyola did not lie down.

The visitors slowly chipped into the Trevs’ lead. Power returned and her huge block got the Ramblers within one point at 20-19.

Even with the momentum, New Trier gave way early to the potent Ramblers’ attack.

The Ramblers jumped out to a lead of 9-4 and held it until they were up 15-10. That’s when the Trevians’ comeback began.

“I would say we weren’t playing disciplined defense,” Thelander said. “We weren’t going to the spots we were normally going to, and New Trier was getting kills and that allowed them to get momentum.

“We weren’t getting enough touches on our blocks and our defenders weren’t going where they are supposed to be going.”

Loyola clung to a slim lead until a Burns’ kill finally got the Trevs in front at 23-22.

A tip kill from Trevs’ middle Sophia Gabuzzi (6 kills) followed, and Burns finished things off with her 11th kill.

While Burns led the charge, she said it took a team effort to respond from the Set-1 loss.

“We just know if someone is not playing too well, we have to pick them up,” she said. “There is not someone on this team that excels more than anyone else. We all work together as a team.  That’s what we need to do and that’s what we did.”

New Trier improved to 9-2, while Loyola (13-1) — winners of both the Crimson Classic in Plainfield and Summer’s End Tournament at New Trier — dropped its first match on the season.