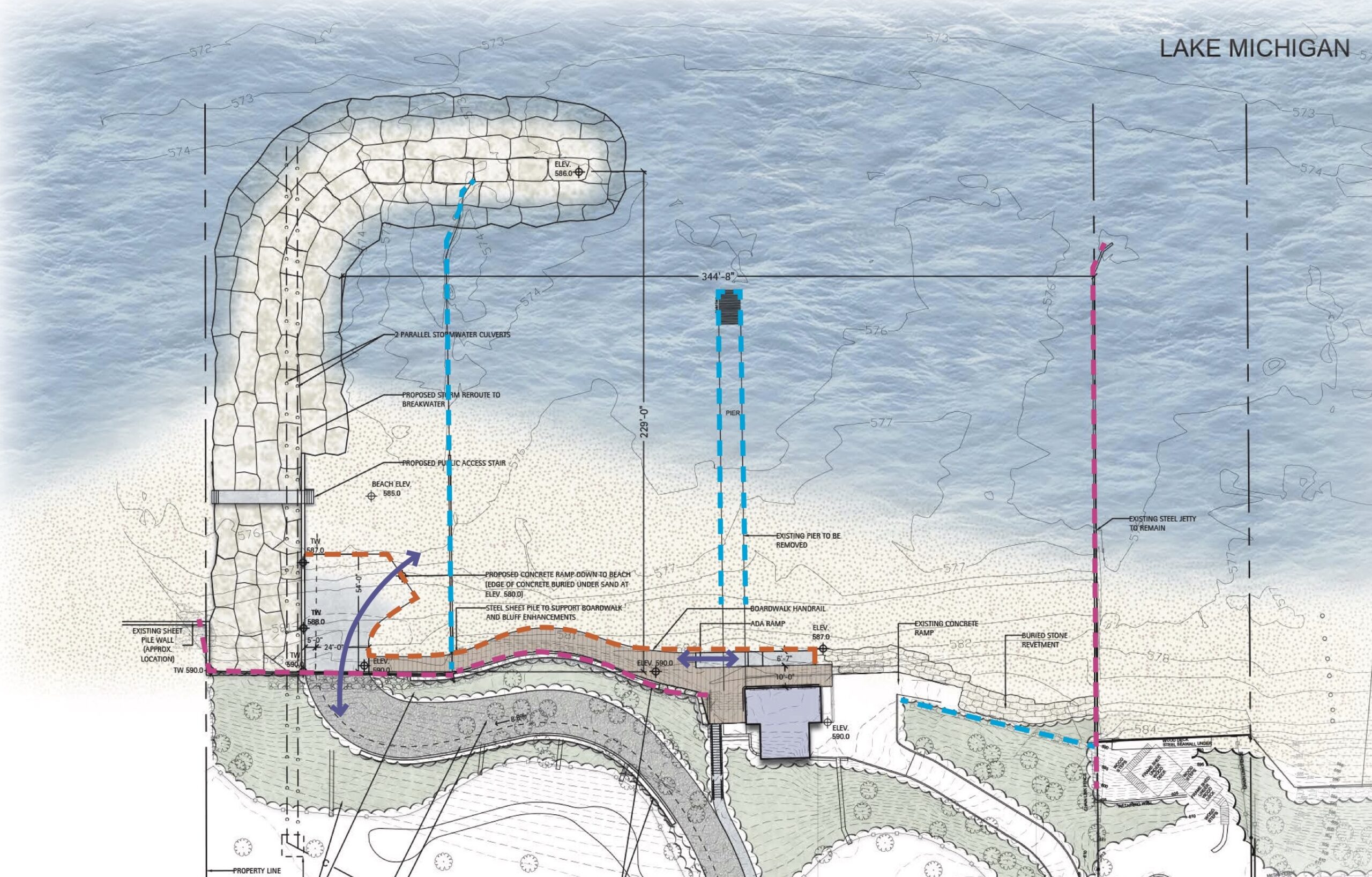 One of three new ideas for Elder Beach. | Image from Winnetka Park District

A billionaire and a beachfront has made for compelling drama for the past few months, but the Winnetka Park District is preparing for what to do in case of a breakup.

Park officials presented nine new lakefront concepts to the Winnetka Park Board on Thursday, Aug. 18, that are more flexible in order to accommodate circumstances if a controversial land swap with resident Justin Ishbia does not go through.

The ideas, along with their cost estimates, will be the subject of a public lakefront workshop at 6 p.m. Thursday, Aug. 25, at Hubbard Woods School.

Ishbia, who owns land in between Elder and Centennial parks, and the Winnetka Park District reached a tentative agreement to trade property in 2020. The two sides have been in negotiations ever since.

With the swap, and Ishbia’s influence, in mind, the park district developed a combined-beach proposal that included a steel barrier around the project’s perimeter. The barrier and other aspects of the plan were heavily criticized by residents and local officials and the proposal was axed in June.

The park district has since developed new plans specific to both Elder Beach (three designs) and Centennial Beach (six designs) for if the deal with Ishbia falls through and he is still owner of the in-between lot. Estimates for the Elder concepts range from $1.6 million to $7.4 million, while the Centennial concepts range from $302,800 to $4.9 million.

In all of the proposed designs, the steel barriers and planter boxes, both of which faced scrutiny, are removed.

At Elder, the least-elaborate concept is highlighted by bluff restoration, a stone revetment and pier repairs, while possible improvements in the other plans include a stone breakwater stretching into the lake, a new pedestrian path to the beachfront and a boardwalk.

For Centennial Beach, bluff restoration is the bulk of the minimalist plan, while other concepts include everything from new breakwater to a reconfigured walking path.

The concepts presented at Thursday’s open workshop will also include two proposals from residents. The proposal from Chuck Dowding — an engineer, professor emeritus at Northwestern University, and chairman of the town’s environmental and forestry commission — goes without a stone breakwater and revisits early ideas of an outfall pipe.

At the final workshop on Thursday, residents can offer their feedback to park officials, including staff members, commissioners and consultants. In September, the Park Board plans to present amended designs that reflect the community’s input.