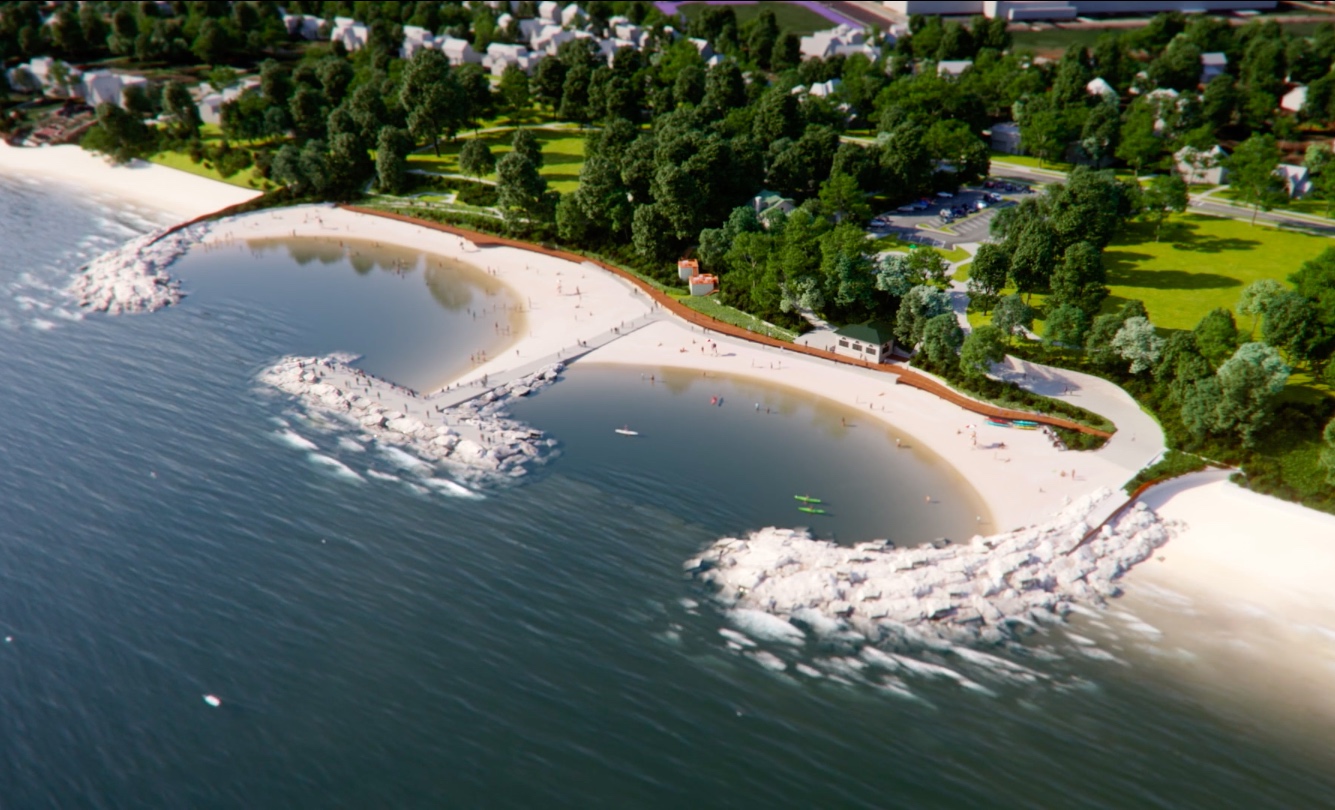 The Elder-Centennial plan would provide 1,000 continuous feet of Winnetka public beachfront, if a deal with property owner Justin Ishbia goes through. | Image from Winnetka Park District

Another dramatic chapter in the ongoing saga of the improvement of Elder and Centennial beaches was told Thursday evening, when the landowner who entered into a property exchange agreement with the Winnetka Park Board publicly identified himself and spoke about what he’s willing — and not willing — to do to move the plans forward.

Justin Ishbia — who, though revealed by the Chicago Tribune in June 2021, was known publicly as the Orchard 2020 Trust until the meeting Thursday, June 16 — acknowledged he was willing to take the controversial louvered, or slatted, steel wall off the table when it came to the land exchange agreement.

“I came here tonight to introduce myself to the community and state that I believe at this time it is best for the Winnetka community to support a contiguous park without louvers,” he said, with his initial comments being met with applause by the audience after he finished speaking.

“I have been told some members of the community have said, ‘Love the project, hate the louvers,’” Ishbia continued. “If that is the sentiment, I would encourage elected officials to try and accomplish the goal of a unified park with no louvers and one that will be a crown jewel of the Winnetka community for generations to come.”

The louvered walls have been the main point of contention with commissioners, Village trustees and members of the public, who first addressed the Park Board during open houses in May and have been speaking up ever since.

The conversation hit a breaking point last week when the Park Board, with two commissioners absent, voted 3-2 to pull the plan’s permit application filed with the Illinois Department of Natural Resources and the Army Corps of Engineers.

During June 16’s nearly five-hour meeting, which was held at Hubbard Woods Elementary School to accommodate a larger crowd, Park Board President Warren James acknowledged that mistakes were made during the process.

“We endeavored and we’ve come up short to communicate this plan,” he said. “It was COVID. We were meeting via Zoom. We had Zoom sessions up through the end of April (2021).”

He also said the board should have done a better to share the proposals with Commissioners Cynthia Rapp and Colleen Root, who joined the board in April 2021 and May 2021, respectively. Root, in particular, has been vocal in her criticisms of the plan and repeatedly said she was not informed of specific parts of it despite asking for more information.

Both commissioners, along with David Seaman, voted to pull the permit.

“And I will acknowledge our deficiencies in sharing those plans with Commissioner Rapp and Commissioner Root,” James said. “There were a lot of moving parts.”

Ishbia said he believed the louvers would improve the beach, which is why he initially supported them.

“The proposed louvers were agreed upon to create a better park and a safe environment for all,” he said. “They were never 13 feet tall nor were they intended to create such a controversy.”

As the board began discussing its next steps, Ishbia offered a new proposal for the commissioners. His plan removes all fencing and steel but keeps everything else intact.

With Ishbia’s permission, the board started discussing the new proposal and revealed some previously unknown details that had only been discussed in executive session up to that point.

This included the revelation that one of the two pocket planters that is included in the proposal will be owned and maintained by Ishbia, and the other will be owned and maintained by the park district. He stated that the plan is, once the project is approved, for the two entities to discuss which plants would be appropriate for the planters and they would each be responsible for the upkeep of their side’s foliage.

Ishbia said the planters are something he will not concede, because he wants something that will distinguish the public beach from his private property, and added that the planters have been “part of the deal since Day 1, before we started the conversations.”

“It was really important to have there be something that signifies the end of public property,” Ishbia said. “The public beach has to end.”

It was also revealed that, although the land use agreement has been signed, the property has not yet been deeded to the park district. Ishbia said that he is waiting for the plans to be approved by the board, at which point he will sign the deed and give it to the commissioners.

James added that negotiations with Ishbia have at times been contentious.

“In a turn of events, the terms were raised as to the design of the improvements and negotiations stalled, broke down,” he said. “We came to loggerheads.”

James also revealed that, at one point, the board was considering litigation.

“This board deliberated carefully,” he said. “And (we) decided that litigating with a billionaire is probably not a good idea for the Winnetka Park District. So, we decided to continue to negotiate.”

The board was aware the previous plans were imperfect.

“We worked hard to arrive at a concept that we knew had many potential flaws and would receive a lot of pushback,” James said. “But we agreed that we would advance that plan, knowing full well that all plans, as such, would go through the IDNR and the Army Corps and would be subject to a public review process.”

But Ishbia said he’s losing patience with the delays.

Without stating a deadline, Ishbia warned the Park Board that he is willing to pull out of the agreement.

“But I’ll be honest with you; I ain’t waiting six months,” he said. “So, there is a time limit here. With all due respect, it started 23 months ago.”

He added, “So, I’m not putting a gun to your head. I’m not saying today, but I’m not waiting six months. … But if you think I’m going to close on the land outside of my rights, the answer is no. That’s the very simple answer. Warren and John (Peterson, park district executive director) have asked that for 23 months. It’s been the same since Day 1. That was the stipulation before I even signed the agreement.”

After brief discussions, the board did not take any votes in relation to the new proposal, and James removed the topic from the board’s executive session agenda, saying he did not feel all commissioners wished to discuss the matter privately.

Instead, the board scheduled a workshop session on the Elder-Centennial plans for July 18, where they will receive feedback from the public about what the next steps should be. James also told The Record after the meeting that the board will discuss the plans again at its regular meeting on July 21.

James added, however, that there is a time factor and that the board needs to act as soon as possible. Aside from the increasing costs to labor and materials, he said Elder Beach in particular has many safety hazards, including exposed metal and a 75-year-old pier.

The board also received dozens of public comments on topics ranging from suggesting an advisory committee made up of local residents to concerns about the planter pockets and Ishbia’s role in negotiations to citizens asking if the board even needs to merge the two beaches. Others suggested the board take a step back and slow down with the plans.