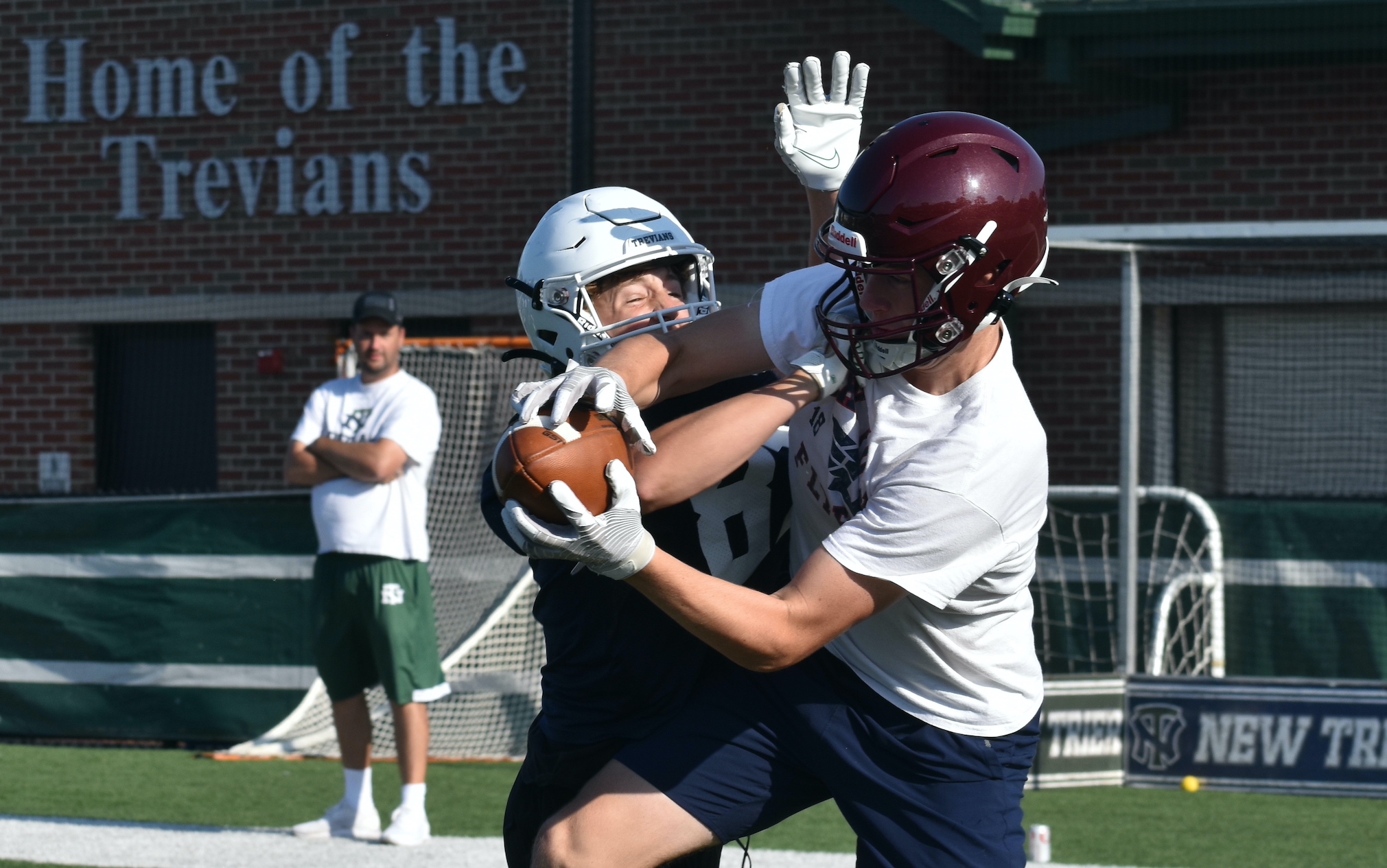 The positive vibes took over Robert Naughton Stadium in Northfield as the Trevians welcomed on Wednesday, July 13, their neighbors from Loyola Academy for a 7-on-7 competition.

Both programs tested their passing offenses and defenses in the early evening, but each is in a different position coming into the 2022 season.

New Trier is looking to replace a slew of offensive weapons from a team that averaged more than 35 points per game in the regular season (5-4 overall).

“To start this year we didn’t know what we were going to get,” Doll said. ” … Going into the summer we are kind of open with a lot of non returning starters.”

With three-year starting quarterback Nevan Cremascoli throwing passes for Northern Illinois University, Doll and company are searching for their next QB. Sophomore Patrick Heneghan and junior Dylan Jeppe are jockeying for the starting spot and both got looks against the Ramblers on Wednesday.

Doll said Heneghan’s performance Wednesday and Tuesday, July 12, when New Trier competed with three local foes at Maine West, has put him out in front but he hopes to use both athletes on the offensive end.

The Trevians defensive unit will be anchored by productive returners Ty Stringer, a junior and All-Conference defensive tackle, and Henry Wolfe, a senior and outside linebacker. Fitzgerald, Ochsenhirt and McCary will play both ways. The defensive backfield will be a new but impressive group, Doll said.

“What’s impressed me most is the junior DB’s,” he said. “We have four or five kids that have really jumped out to us.”

The Trevians open their 2022 campaign at home against Hersey on Aug. 26 before taking on Stevenson, Palatine and Fremd in the nonconference slate, before moving on to Central Suburban South play. New Trier opens league action against Evanston on Sept. 23 and closes with a road tilt against Maine South on Oct. 21.

New Trier took 2021 losses to local foes Evanston, Glenbrook South and Maine South as part of a 5-4 record that handed the Trevians a playoff berth. This season, the Trevs play five 2021 playoff teams.

“We have a different home opener with Hersey,” said Doll of a team that scored 40+ points five times a season ago. ” … Our opening four are not easy. It’ll be challenging.”

For Loyola, plenty of new faces will step onto the field with the varsity unit, but with senior leadership on both sides of the ball, the Ramblers appear built for another successful season.

Returning starting quarterback Jake Stearney (Colgate commit) is back for his senior season after leading the Ramblers to 12 straight wins in 2021, up until eventual state champ Lockport Township ousted Loyola in the IHSA Class 8A semifinals.

Stearney aired it out plenty against New Trier on Wednesday, practicing his touch on everything from end-zone fades and jump balls to seam and sideline routes. After an off-target start, Stearney found a groove as the Ramblers found the end zone a number of times.

“Stearney had a rough start but was much better at the end,” Loyola coach John Holecek said. “The receivers caught balls better than they had in the (two) previous ones. …. We’ve seen enough of Stearney and know his body of work. He just has to build trust with the receivers.”

Behind returner Spencer Leadbetter, the Ramblers have holes to fill on the outside and are looking at Cory Larsen and Declan Forde among others. But in the middle, both big, college-bound tight ends, Jack Parker (Western Michigan) and Jack Fitzgerald (Northwestern), are back as pass-catching and blocking assets.

Loyola has been armed with state stars at running back — Vaughn Pemberton (2021 grad, Ball State) and Marco Maldonado (’23, Colgate) — for the past three seasons. When Maldonado went down with an injury last season, the Ramblers used a running back by committee, and two of those backs will return: senior Kyan Gibbs and junior Will Nimesheim.

On the other side, the Ramblers traditionally formidable defense will be anchored by senior defensive back John McGuire (65 tackles in 2021) and Michigan commit Brooks Bahr, a 6-foot-6 defensive end, who previously told The Record the Ramblers are out for revenge this season.

“The team is going to be coming out for revenge, and we’re going to have a chip on our shoulders and try to avenge the seniors,” he said in March.

Outside of the two starters, the Ramblers will have to replace seven of their top nine tacklers from last season.

Loyola opens its 2022 campaign with a special matchup on Sunday, Aug. 28, against St. Xavier out of Cincinnati as part of ESPN’s High School Kickoff, as reported by The Record in February.

The Ramblers have an open slot in their second week, followed by the start of league play, beginning with a road matchup with St. Rita on Sept. 9 and a home tilt with Brother Rice on Sept. 17.