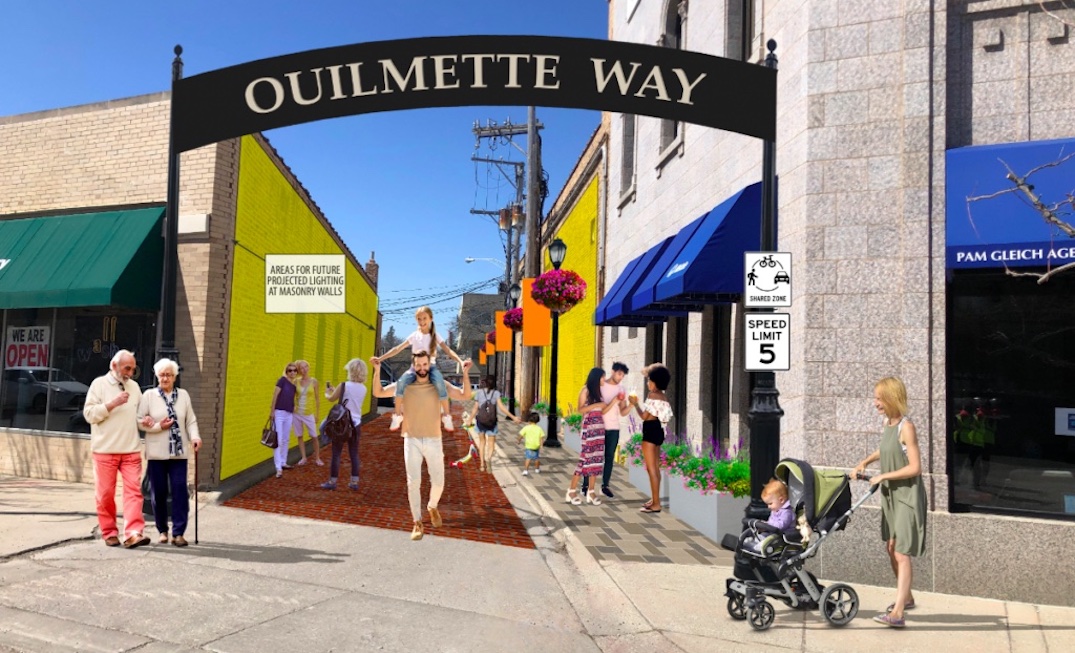 An updated rendering of Ouilmette Way, which received Village approval Tuesday, May 10. | Image from Teska Associates

Ouilmette Way is officially on the way following approval by the Wilmette Village Board Tuesday evening.

The downtown-alley makeover is a hallmark community project in the Village’s sesquicentennial celebration throughout 2022.

Ouilmette Way, which officials have discussed and honed since late 2021, will create a shared path that connects the town’s Metra station to the heart of its downtown.

In the approved plans, the project will overhaul the alleyway abutting the Baker Building to the south from Wilmette Avenue to 12th Street. The enhanced roadway — for an estimated total cost of $563,045 — will also include an improved crosswalk at 12th Street, a 6-foot-wide raised pedestrian segment, the resetting of current pavers, new lighting, and gateway signage on each end .

Village trustees backed a staff recommendation for Concept B, a less-expensive plan (-$172,000) that utilizes street-pole lighting instead of overhead festoon lighting.

The Village, however, is projected to take just a $343,000 hit thanks to contributions from two private parties: Optima, which provided the Village with $120,000 in streetscape funds as a condition of its five-story downtown-Wilmette project; and North Shore Community Bank, which is donating $100,000 to the project in a gift announced during Tuesday’s meeting.

“North Shore Community Bank is proud to be a part of the Wilmette community and proud to support the Ouilmette Alley project,” said Cathy Pratt, the bank’s president, in a statement. “As a welcoming gateway to the Village, the project will serve as an ongoing reminder of the Village’s Sesquicentennial Celebration and will benefit Wilmette residents for many generations.”

The alleyway will also feature a unique form of street art in which light and images will be projected onto special masonry on either side of the alley.

Sesquicentennial Committee member Julie Wolf, a former Wilmette trustee, said a contract is pending with the same artist who designed Kohlights holiday lights at Kohl Children’s Museum in Glenview and the Chicago bridges project, which illuminated 11 bridges along the Chicago River. While she did not name the artist, she was referring to Tracey Dear, of Dear Productions.

“It will be a first of its kind. There will be nothing like it on the North Shore,” said Jodi Mariano, of Teska Associates, architects behind the Ouilmette Way project.

The Village expects construction to begin in July, and Ouilmette Way to debut in August in advance of the community’s sesquicentennial bash on Sept. 10.