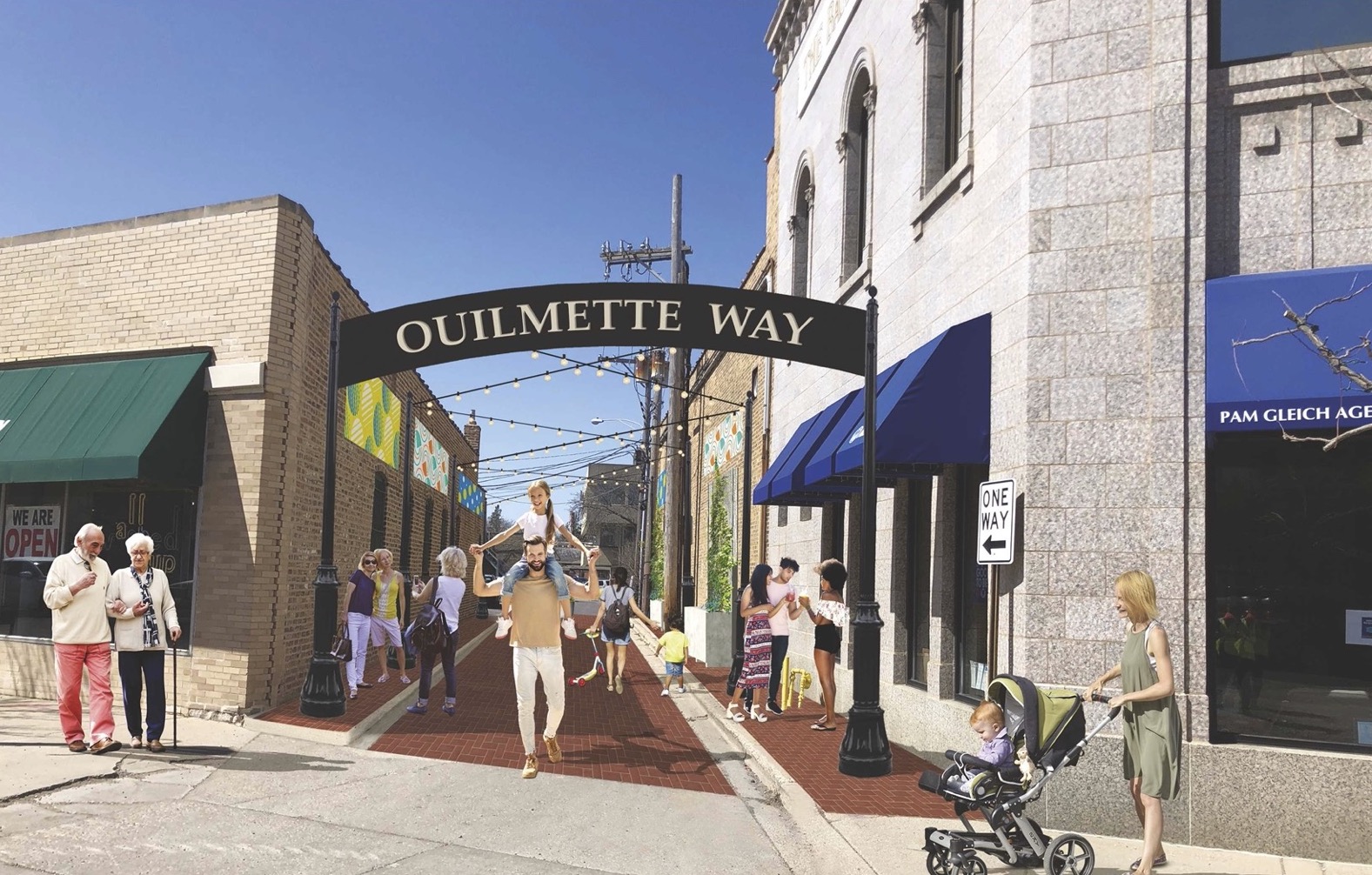 A rendering shows initial ideas to overhaul an alley in downtown Wilmette. | Images by Teska Associates

Over the past few years, the Village of Wilmette has invested in the redevelopment of its downtown area, most notably with its recently completed Central Avenue and Downtown Streetscape project.

Those efforts will continue if the Village Board decides to move forward with a reimagining of a downtown alleyway into pedestrian walkway.

Village President Senta Plunkett told The Record that the project, called Ouilmette Way, is something that’s been on people’s minds for several years.

The alleyway in question runs east to west from Wilmette Avenue to 12th Street just north of Central Avenue.

Plunkett said, more than 15 years ago, the Village Board discussed a similar project, but trustees at the time never moved beyond discussions.

Recently, community members approached Plunkett about rehashing the discussion of the alley and the idea of Ouilmette Way.

“I think, with the refurbishment of downtown through our streetscape and seeing how fantastic our downtown could look, and seeing our restaurants and businesses crowded and lots of people dining outside, it seemed like a good time to see if we could add any more public space and improve” the downtown area even further, Plunkett said.

She referred to Ouilmette Way as “an extension of the streetscape.”

At the Village Board’s regular meeting on Tuesday, Nov. 23, trustees – with the exception of Peter Barrow, who was absent – heard a presentation from Jodi Mariano, principal landscape architect with Teska Associates, on the redevelopment and what a new path could look like.

Mariano’s presentation divided the alley into three portions: he eastern part, the western part, and 12th Street. She talked about ideas specifics, including utilizing existing brick pathways, signage identifying the alley as Ouilmette Way, and what was referred to as festoon lighting — overhead string lights that would be used to brighten the alley and are also utilized throughout Village Center.

In addition, George Pearce, a village resident and member of the Sesquicentennial Planning Committee, said that the committee would be selling brick pavers for $150, and anyone who buys one would have their names engraved on it. He also clarified that those funds would not be used for the Ouilmette Way project, but go toward the village’s planned celebrations for its 150th anniversary celebration, which is scheduled for September 2022.

Plunkett told The Record that the plans also call for adding a crosswalk on 12th Street, including streetscape furniture and landscaping, and making the area more pedestrian-friendly; though, she stressed that the project is still in the planning stages and final designs have not been approved. She also said the alley could be closed for special events.

The plans for 12th Street would help to link the Metra station to downtown, and provide a path for people to access it more easily, Mariano said in her presentation to the board.

Additionally, Mariano also provided cost estimates for each portion of the project. The 12th Street portion is estimated to cost nearly $94,000; the west alley around $169,000 and the east alley $175,000.

Village Manager Mike Braiman added that although Ouilmette Way would be designed as a pedestrian walkway, vehicles would still be allowed to travel down it.

Braiman said an informal traffic study was done where a camera was placed near the alleys to see how many vehicles utilized them on a Thursday and Saturday.

For Thursday on the west alley, Braiman said the study found 282 cars and 16 trucks utilized it, while on Saturday it was 356 cars and three trucks.

On the east alley there was less traffic, with 150 cars on Thursday and 208 on Saturday.

Mariano said that none of the ideas would block the alley to create a traffic problem for the downtown area.

In response to questions from Trustee Gina Kennedy about safety, Braiman said they want the alley to be safe for both pedestrians and drivers.

He said they would like to direct foot traffic to the north side of the alley, most likely with pavement markings, as he said creating a raised sidewalk would be challenging and most likely cost-prohibitive.

“We wouldn’t put this forward if we felt there were safety concerns, that we were creating a bigger safety problem,” he said, adding that he believes the added lighting will make it safer.

Although no votes were taken on Tuesday, one is expected at the board’s regular meeting in December.

Plunkett told The Record that she believes Ouilmette Way would be another improvement to the downtown area.

“I think investing in our downtown comes back manyfold,” she said. “We’ve seen that with our streetscape, and our businesses are thriving and Wilmette has become the dining destination the North Shore.”

She added that Ouilmette Way would “further enhance our downtown streetscape and be beneficial to businesses and residents alike.”