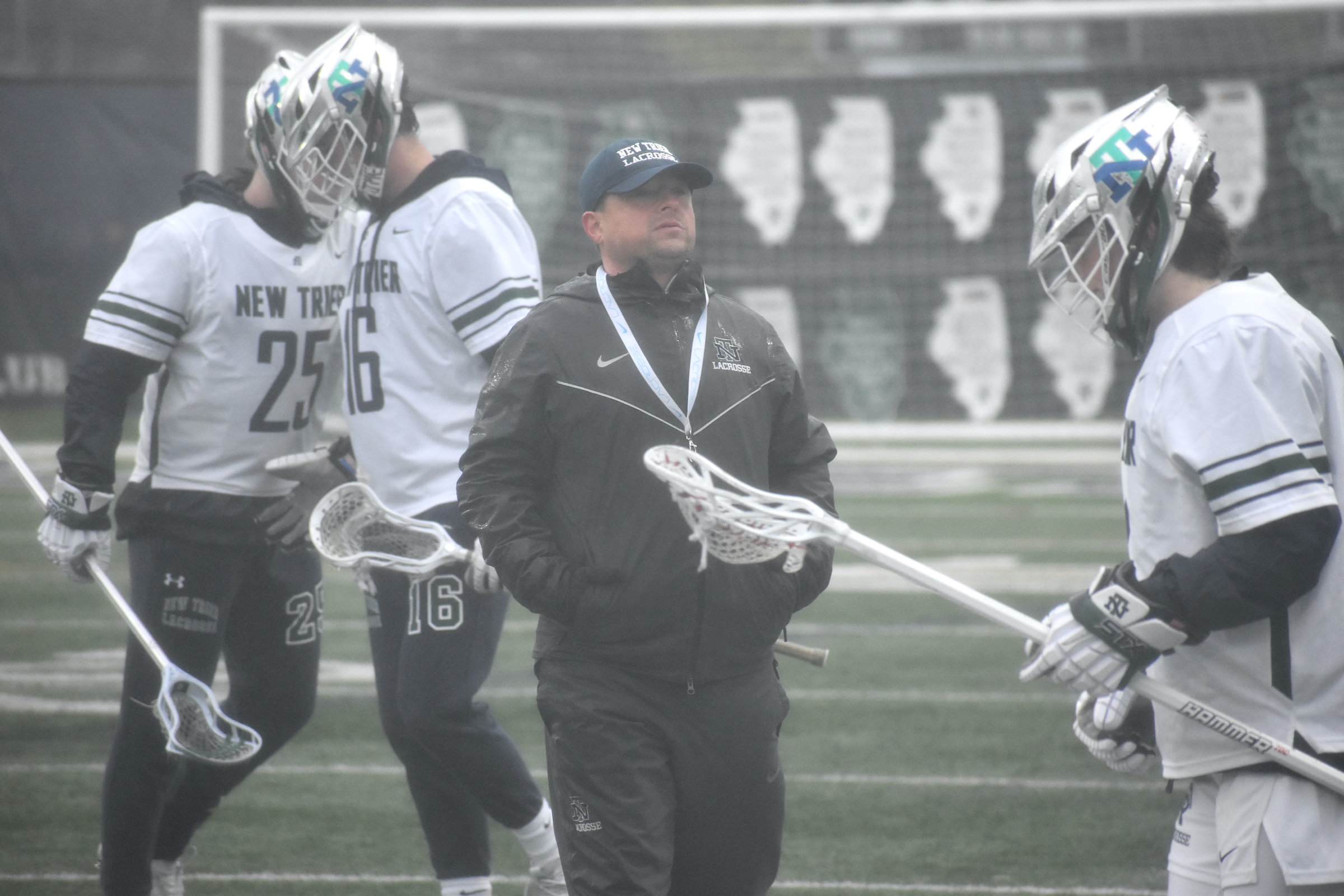 New Trier varsity coach Jason Schoenwetter helps the team get ready for a tilt with Evanston on a cold and wet evening Tuesday, May 3, in Northfield. | Photos by Joe Coughlin/The Record North Shore

The New Trier boys lacrosse team is two months into its season, and there is still no sign of longtime head coach Tom Herrala.

During an 18-6 victory over visiting Evanston Tuesday, May 3, the Trevians were again led by assistant varsity coaches Jason Schoenwetter, Adam Dickson and Paul Newman as school administration continues to investigate hazing within the lacrosse program stemming from a March 5 incident.

School administrators again declined to comment on the status of Herrala, who has coached within the program for more than 20 years.

The incident in question involved a digital video showing multiple varsity lacrosse players beating a teammate, as first reported by The Record on March 28. New Trier acknowledged the incident in a March 31 email to district families, writing that it placed the team on probation and disciplined multiple individuals for their involvement in the hazing. The district’s message, however, did not provide details on the punishment of individuals, and district administrators declined to answer followup questions from The Record.

In an email exchange with The Record, New Trier Communications Director Niki Dizon said discipline is determined “on a case-by-case basis” and referenced the school’s Extracurricular Code of Conduct, which states that “in most cases” a violation results in suspension from the activity.

In the Trevians first contest of the season, a 10-2 loss to York on April 7 in Elmhurst, they competed without as many as 12 players. Since, the team has played 10 more contests and carries a 9-2 record — its other loss coming to Loyola Academy on April 12.

Outside of injury, New Trier was playing at “full strength” in Tuesday’s victory over rival Evanston, Schoenwetter said.

He added that the team has worked to address and overcome the incident.

“We have been taking everything day by day,” he said. “We’ve been trying to learn and grow as a team, been trying to have open conversations with each other and just take things day by day.”

It remains unclear if Herrala will return to the New Trier lacrosse program this season or ever. School officials have declined to answer repeated questions about Herrala, saying that they do not comment on “personnel matters.”

Herrala has not returned several messages from The Record.

In a previous email to The Record, Dizon wrote that “hazing is absolutely not tolerated at New Trier,” and “our coaches are instructed on our anti-hazing policies, and teams are warned of the consequences of hazing at the beginning of each season.”

The Trevians have collected 13 state championships since 1995 and continue the pursuit of that goal this season. With postseason play beginning May 23, Schoenwetter said his team has no time to waste to put it all together.

“In two weeks, we need to be the team that takes care of every little thing, the little details from practice preparation to game-day preparation,” he said. “Really we need to have perfect practices from here on out.”