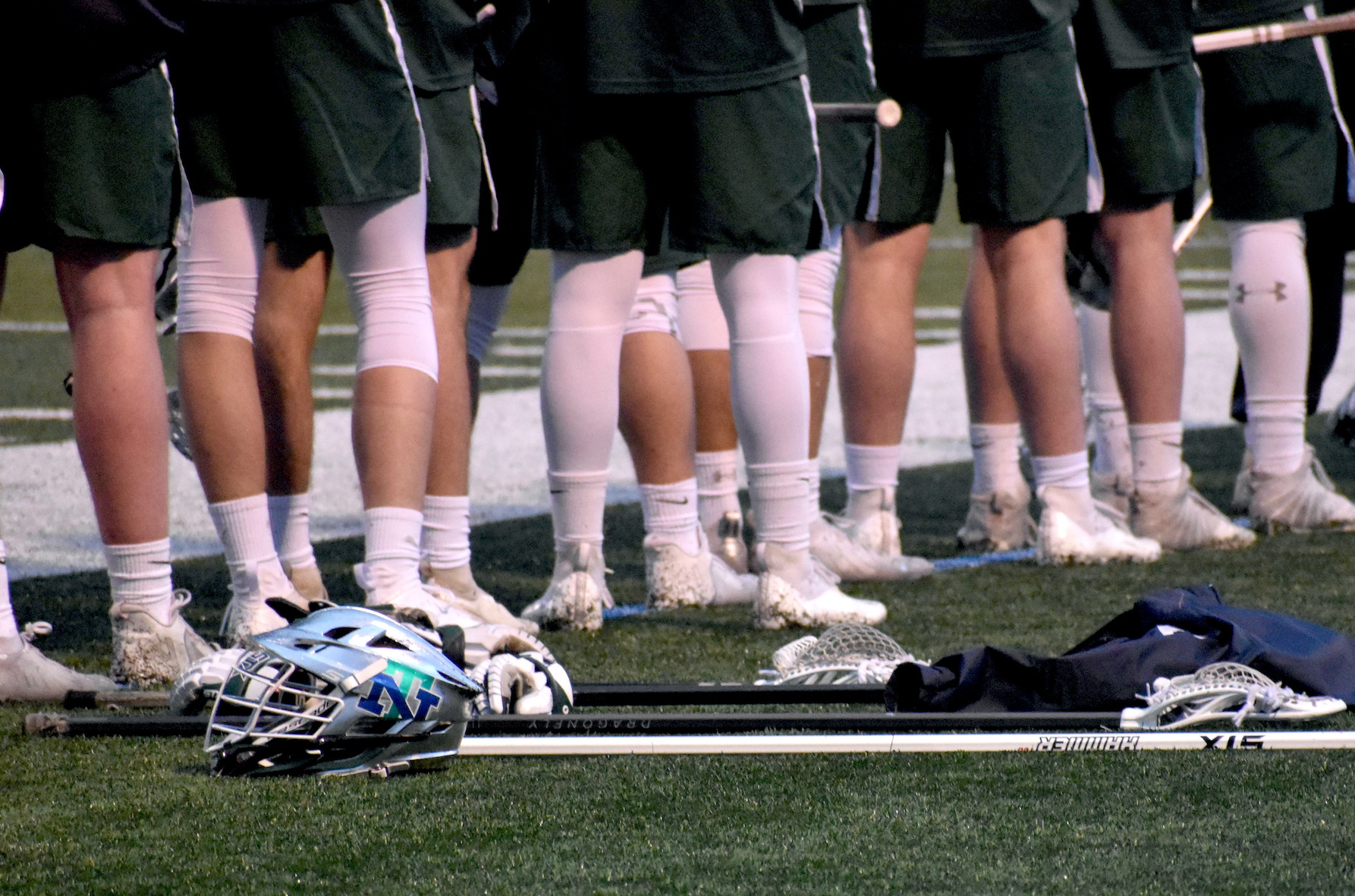 New Trier lines up before its first game of the season Thursday, April 7, in Eilmhurst. | Joe Coughlin/The Record North Shore

New Trier boys lacrosse opened its season Thursday, April 7, and it did so without longtime head coach Tom Herrala.

Herrala’s status with the Trevians program is unclear as the high school continues to investigate a hazing incident in early March that involved multiple New Trier lacrosse players.

New Trier Superintendent Dr. Paul Sally and Athletic Director Augie Fontanetta were in attendance at the away contest against York High School April 7 in Elmhurst. Sally declined to comment on Herrala, saying the school does not discuss personnel matters.

It is unclear if Herrala is still the Trevians head coach. In Thursday’s game, the Trevs were led by assistant coaches Jason Schoenwetter and Adam Dickson. New Trier lost to York, 10-2.

Herrala has coached with New Trier lacrosse for 25 years. He has in his 13th season as the head coach of the boys program and in that time has collected 200-plus victories and seven state championships.

Herrala did not return The Record’s request for comment.

On March 5, a group of New Trier boys lacrosse players battered at least one of their teammates in what is being called by the school a hazing incident. A portion of the hazing was caught on video, which was first reported by The Record on March 28.

The email says that the district’s “comprehensive investigation” into the hazing is active, and it referred to the incident as “serious and disturbing.” Sally confirmed on Thursday evening that the investigation is ongoing.

In the wake of the hazing, the New Trier’s boys lacrosse team is barred from any out-of-state competition this season and already missed a three-game road trip to Ohio. The Trevians are also on probation through the 2023 season, according to the email, which adds that if another “behavior” incident occurs or is uncovered the team will lose its season.

Studentswho participated in the hazing reportedly faced “serious consequences,” but the email did not detail those consequences. In response to followup questions from The Record, New Trier Director of Communications Niki Dizon declined to report how many lacrosse players were disciplined and the nature of that discipline.

In the opener at York Thursday, 36 players were on the Trevians sidelines and 12 of them were not in uniform. Sally would not comment on why the players were unavailable or if any players were dismissed from the team.

Dizon said discipline is determined “on a case-by-case basis” and referenced the school’s Extracurricular Code of Conduct, which states that “in most cases” a suspension from the activity results from a breach of the code.

The code prohibits — among other things — alcohol use and possession, assault or battery, and “bullying, intimidation, hazing and harassment” in a variety of forms, whether within or outside the school day.

Dizon did not directly answer if hazing is an ongoing concern at the school, but said that “hazing is absolutely not tolerated at New Trier,” and programs and policies are in place to combat hazing and promote “positive team culture.”

“Our coaches are instructed on our anti-hazing policies, and teams are warned of the consequences of hazing at the beginning of each season,” she said in an email to The Record. “In addition, many student team leaders participate in our Student-Athlete Leadership Training (SALT) program. … We take pride in the sportsmanship and leadership shown by so many of our student-athletes and want all of our teams at all levels to have a positive experience. That is why we continue to take steps to make sure something like this does not happen again.”