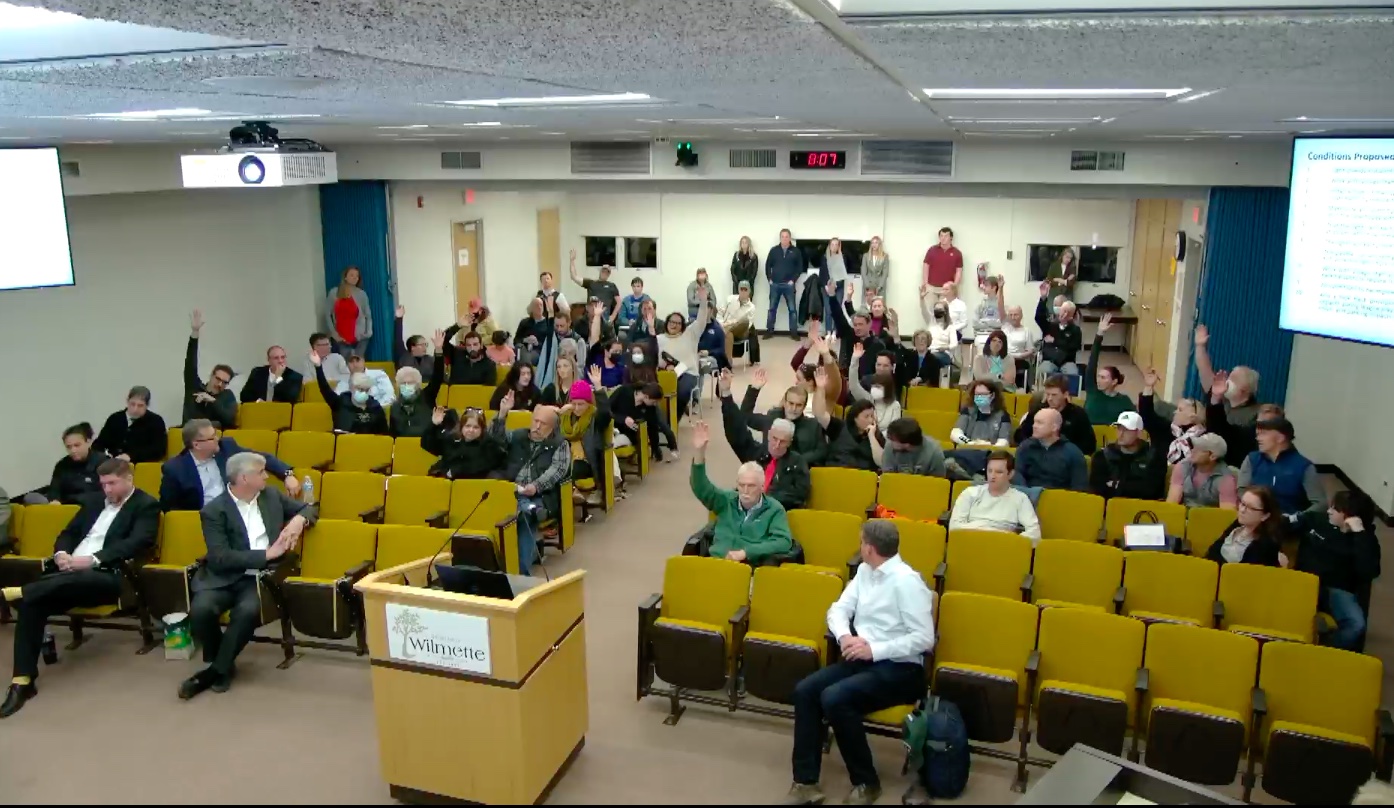 Trustees agreed that under a number of conditions they will approve at their next meeting May 10 the addition of two paddle tennis courts. An ordinance to extend the park district’s special use on the land and the accompanying conditions will appear on the next consent agenda.

The board’s decision to push the measure forward came at the end of a five-hour-long meeting that featured 25 resident speakers and two hours of board inquiry and discussion.

In the end, multiple trustees — led by Kate Gjaja and Gina Kennedy — said that the conditions of approval were essential to their support of the expansion and will ease the burden currently felt by West Park neighbors.

“I think the best solution for the neighborhood is to approve something I don’t think should be approved,” Kennedy said. “It may be the only way to get the park district to listen to (the neighbors).”

After the district’s Park Board approved the expansion plan, it reached out to the park’s neighbors with a letter that was met with surprise and concern.

Neighbors organized the group Friends of West Park Wilmette and began challenging the district’s efforts. They gained an ally when the park officials went before the Village Zoning Board of Appeals, which cited its negative impact on the neighborhood before unanimously voting to recommend denial of the plan.

The Park Board then rolled back the expansion to just two additional paddle tennis courts, and hut and decking additions, prior to Village Board consideration Tuesday night.

At the meeting, the park district provided an introduction to the project, including the previously agreed-upon conditions, including light shields, light- and noise-mitigating landscaping, more control of the lighting (timer or motion sensors), a defined lighting schedule, parking replacement and improvements, and a “lookback” provision that allows for village review of paddle activity at regular intervals.

During the meeting, trustees and district officials also reached preliminary agreement on further conditions to be drafted by village counsel. They include: overnight clean up of the paddle hut, including alcohol containers; and a clear date range when Wilmette Paddle Tennis Club league is in season.

Neighbors to the park then offered spirited testimony in regard to how the paddle facility’s lighting, noise and player behavior have impacted their homes and families. Some residents also criticized park officials for an alleged lack of transparency and respect during the plan’s development.

Aside from the six-court paddle facility and hut, opened in 2013 and expanded in 2017, West Park features a children’s playground, garden plots and athletic fields, which are surfaced with synthetic grass atop a 5.5-million-gallon stormwater reservoir.

“Paddle (tennis) can be added to any park in Wilmette and I think it is really unfortunate that the park district wants to add it to the park that has the least amount of green space … by a wide margin,” said Carolyn Cole, who lives near the park.

The facility is owned and operated by the park district’s Wilmette Paddle Tennis Club, which organizes league play and usage throughout the year. Membership is between $580-$700 per year. Courts can also be rented by nonmembers.

Trustees questioned alcohol use in the facility, which is allowed by the park district, as well as facility staffing, site parking and the park district’s continued development of the park.

Murdock said that alcohol usage “is part of the sport” and being a member of the league.

Trustee Dan Sullivan noted the passion of the neighbors and wondered if West Park was at its tipping point in terms of recreational amenities.

“At what point is enough too much?” he asked. “This is the one case in a while that I can remember where the entire neighborhood is against us, with the exception of Loyola … where we went back and built consensus. … We’ve been really good work building consensus. We’re not doing that here is the sense I am getting.”

Murdock said he believes the neighbors do not represent the feelings of the community at-large and they are not “entitled to a veto” over what the park district feels is for “the betterment of the community.”

The Park Board also implied that many of the neighbor’s reasons for opposing the expansion are inauthentic.

“I don’t believe two additional paddle courts is a material difference in our activity,” he said. ” … It feels like there’s a bit of a spaghetti approach and people are just going to throw something against the wall to see what sticks. They are opposed to anything and everything.”

Village President Senta Plunkett gauged the district’s willingness to staff league nights, when play is allowed until 11 p.m., to ensure better control over alcohol use and player behavior, including use of foul language.

Wilson said the district will consider adding staff in coordination with the “lookback” condition, which will allow the village to review activity at the facility at regular points throughout the year.

Village trustees sided with residents on many of their concerns, but eventually conceded that the effectiveness of the conditional approval would outweigh any potential negative impact of two new courts.

“The conditions we are looking at here go an awful long way to addressing the real problems that exist in West Park,” Trustee Peter Barrow said.

The full list of conditions will be drafted by Village counsel and then considered by the board May 10.