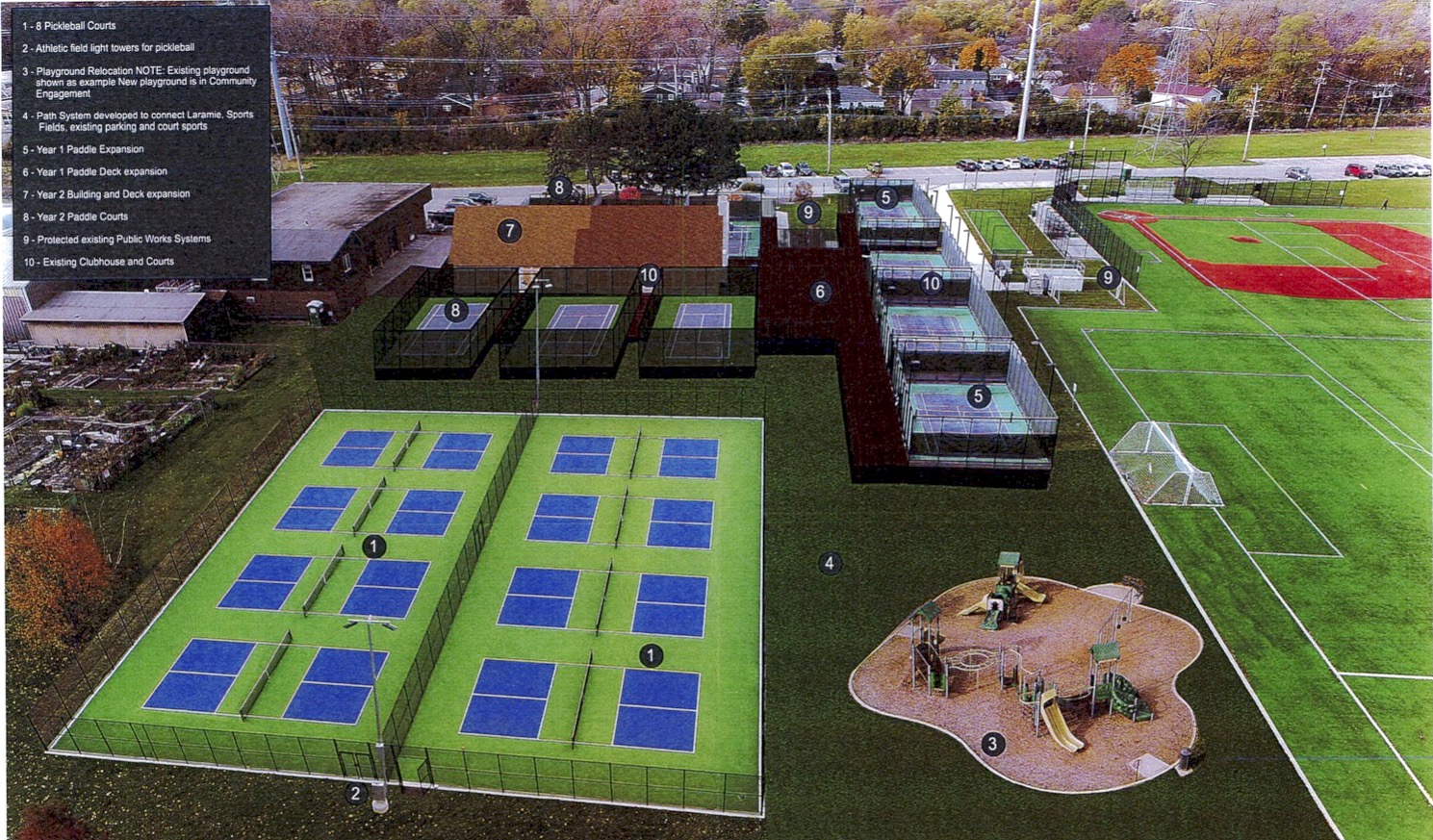 A district-provided visual representation of the proposed facility expansion at West Park.

Following months of protests, public comments and criticism from the neighbors of Wilmette’s West Park, the plans to expand paddle tennis courts and add pickleball courts hit a major roadblock Wednesday, April 6, when the Wilmette Zoning Board of Appeals voted 6-0 to give the project a negative recommendation.

Board member Maria Choca Urban was absent from the vote.

The proposal will now go to the Wilmette Village Board with a negative recommendation. The board is scheduled to take up the matter at its regular meeting on April 26.

The April 6 meeting saw a presentation from the Wilmette Park District as well as experts who conducted traffic, lighting and noise studies to address concerns the Zoning Board of Appeals had at a meeting on March 16.

Additionally, 22 residents spoke about the project, with the majority expressing opposition to the expansion, as they have done since hearing of it in early January.

Five of the speakers, mostly paddle tennis players, spoke in favor of the plans.

But once public comment ended and the commissioners began their discussion, it became clear how they felt about the park district’s proposal.

Commissioner Ryrie Pellaton criticized Wilmette Park District officials for not adequately responding to the zoning board’s concerns from the previous meeting. He said the changes between the initial application and the one brought back Wednesday night were “relatively minor.”

“That broadly says to me that either the park district feels that everything included in their proposal is a must-have item and/or that they don’t feel that the comments the ZBA commissioners made during their presentation in March merited any revisions,” he said.

Pellaton added that he still had “many questions” and was not satisfied with the parking study, which was conducted in mid-January.

“The parking seems counterintuitive at best,” he said. “How do you essentially triple the capacity of this park and the facility and do so while reducing the number of overall spaces is a mystery to me. It just doesn’t make a whole lot of sense.”

He went on to say that park officials failed to provide evidence that the expansion of the facilities would not diminish property values, a concern brought up by some of the speakers.

Finally, Pellaton said one of the standards the ZBA has to determine, based on Village Code, is if a new development “maintains the character of the surrounding neighborhood.”

Commissioner Christine Norrick said that while she appreciates the park district’s desire to expand its paddle tennis and pickleball offerings, she took issue with the studies, calling them “incomplete.

She pointed out that the studies were only done over the past few months, even though the plans have been in the works for a year.

“Those studies should have been done,” she said. “If you still expect to come back and revisit the site, we just need better data for those topics.”

“The park is also for the youths of the neighborhood, and for children, and for adults who just want to go for a walk,” he said. “And basically, the only part of the park that’s going to be left is a small playground that’s being built.”

Glattard, however, did say he would be in favor of just expanding the paddle courts. He believed the addition of pickleball courts was “too much.”

That sentiment was echoed by his colleague Bradley Falkof, who shared that he has played paddle tennis on the existing courts and recently took lessons on how to play pickleball, but he does not believe West Park is the appropriate place for pickleball.

Falkof was concerned about the amount of greenspace being reduced in the park, stating that if the proposal goes through, West Park will only have 20 percent “with natural grass and trees. There’s no other park in the village that comes anywhere close to that.”

He also cited the findings of Dr. Tom Thunder, an audiologist with Acoustic Associates Ltd., who conducted the noise study, as reasons for his negative vote.

Thunder’s study, which was conducted in May 2019 at a pickleball court in Northfield, determined the average sound level was 55 decibels at 70 feet over 30 minutes. Wilmette Code states that decibel levels cannot exceed 50 during the day and 45 between 7 p.m.-7 a.m.

The report also determined that the courts should be at least 150 feet from the nearest residence.

“There’s just no way that this comes anywhere close,” Falkof said. “These courts will exceed the allowable noise level that’s permitted by the village. And you can try to rewrite that ordinance, but that’s still the ordinance that we’re working with.”

Prior to the vote, Wilmette Park District Executive Director Steve Wilson reiterated that there is interest in paddle tennis and pickleball in the village. He said a survey was conducted that showed 500 residents already play pickleball while an additional 500 did not play but would be interested.

“Whenever we can provide recreational opportunities to meet the demand of our users and community, we think that’s a good thing,” Wilson said. “That is what we are trying to do by way of the additional platform tennis courts and the addition of pickleball courts.”

Neither Wilson nor any other park district representatives spoke after the vote.