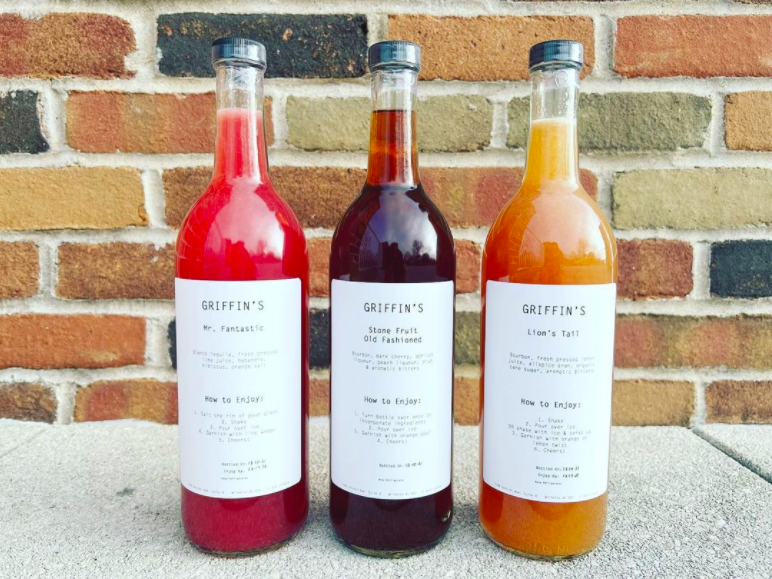 Cocktails to go are already a go in Wilmette.

Shortly after receiving necessary Village approvals in December 2021, Griffin’s began its cocktail-delivery service in time for the holidays.

Griffin’s model was popularized during the pandemic as a way for homebound residents to enjoy craft cocktails at home. The format is commonly called a “ghost bar,” but Grffiin’s also appears in plain sight.

Earlier this month, Griffin’s debuted its pick-up and tasting location at The Bottle Shop, 1148 Central Ave. Griffin Elliott, who owns the business with his wife, Petroula, said from 10 a.m.-1 p.m. every Saturday customers can pick up their order at the downtown Wilmette store.

The rest of the week, Griffin’s collects orders leading up to a Thursday delivery in Wilmette and the surrounding area. On Fridays, Griffin’s delivers to Chicago.

Griffin’s also hosts private tastings, which can be requested through its website, at The Bottle Shop.

“The feedback has been pretty good,” Elliott said of business so far. “We have a nice, small group of regulars. We’re just trying to get out there. We’re seeking exposure with different marketing ideas and different events in the spring and summer. Once the warm weather comes, it will give us some opportunities to get out in the community and connect with new customers.”

Griffin’s packages its cocktails in 750-milliliter bottles, which hold six to eight portions and cost between $38 and $54, according to the website. So far, Elliott said, customers have favored Griffin’s tequila and vodka drinks, such as Mr. Fantastic (tequila, mezcal, lime juice, hibiscus, habanero, orange salt). Griffin’s also offers alcohol-free drinks ($16 per bottle).

The cocktails rotate with the seasons, and Elliott said he’s looking forward to spring-ripe produce to enhance the menu.

A second Wilmette business will soon be bringing a similar business model to town.

Luigi’s will reportedly offer custom cocktails — both for on-site consumption and to-go packaging — in a “speakeasy”-like setting, complete with formal gowns and other fashion on display.

According to village officials, plans for Luigi’s were approved on Dec. 20, 2021 and design plans, which are necessary for finals permits, are pending.