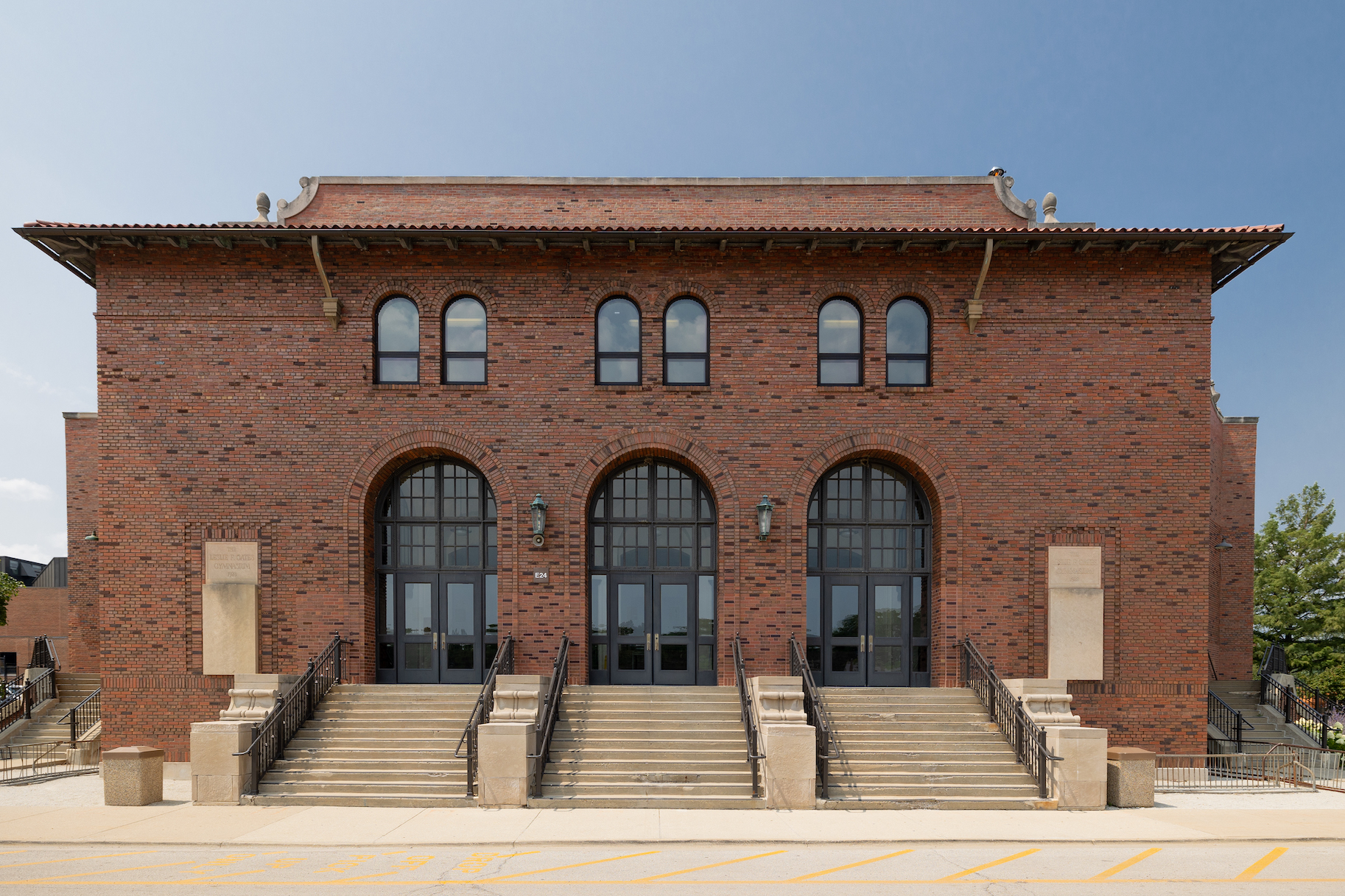 Gates Gymnasium fought with you.

For 90-plus years, the New Trier High School arena has grabbed your passion-soaked cheers and banged them off its stone walls and metal rafters for a super-boost of home-team energy.

The booming Gates’ echos enjoyed their final assault on Thursday, Dec. 16, when New Trier’s boys and girls basketball teams were victorious on the gymnasium’s final evening.

In short order, Gates will be gone. Demolition of the historic building has begun, and by the start of the 2023 school year, a modern, $75-million three-story facility will stand in its place.

With its intimate design and compelling longevity, Gates will forever linger on the boughs of nostalgia. Inside the gym, however, the capacity was no longer viable and the signs of aging could not hide. Crumbs from the dull-yellow bricks lined the floor’s perimeter. Paint chips drifted down from the rust-accented ceiling. The obsolete radiator banks and exposed pipes were not chic.

The well-known main space was surrounded by side gyms, classrooms and kinetic wellness areas that district officials said do not meet modern education needs.

To Teri Rodgers — and countless others in the New Trier community — Gates was more than its faults.

The girls basketball coach of 25 years did not want to let Gates go. It is where her daughter laughed while playing on the bleachers, where she stayed after practice to work with eager players, where the crowd roared so loud before a 2009 sectional game against Loyola that she could hear them outside.

“There are powerful, personal memories I have here,” she said.

When she first heard of the plan to demolish Gates, Rodgers daydreamed of planting herself at midcourt and playing one-on-one with the wrecking ball.

But her memories of Gates aren’t going anywhere. As she learned more about the plans, she dropped her scheme to fight the bulldozer and became part of the project committee, contributing to the new design and amenities.

Similar to today, New Trier High School was facing a crisis of capacity in the 1920s.

The district received approval in 1922 to issue $500,000 in bonds, using the funds to build a new boiler-house and a new gymnasium, according to records from the Winnetka Historical Society.

Dwight H. Perkins was chosen to design the new gym.

Perkins was a Prairie School architect, the same style modeled by Frank Lloyd Wright and Daniel Burnham, both of whom were acquaintances of Perkins. Perkins reportedly designed 40 public schools, including Carl Schurz High School, a historic landmark that is still in use.

According to author Jennifer Gray in a 2014 article for an architecture journal, “(Perkins) pioneered a ‘connected group plan’ for high schools in which various school functions, such as libraries, auditoriums, and gymnasiums, were housed in distinct annexes.”

Perkins’ son, Lawrence, founded the design firm Perkins and Will, which championed many of Dwight Perkins’ ideas and was chosen to design New Trier’s Northfield campus.

The Perkins and Will website acknowledges Dwight Perkins’ historic work on Gates Gymnasium, saying in part: “The entrance to the gym is marked with dramatic arches. … A variety of staircases facilitate easy flow of thousands of students throughout the building each passing period, and Gates includes, by logical extension, all of the athletics fields and courts surrounding the school, emphasizing athletics and wellness for all.”

The year the project was completed, 1928, nine-year School Board member Leslie F. Gates — a Wilmette resident who is credited with the financial tactics that brought the gym to life — died suddenly. The building was named in his honor, and a dedication ceremony that school year welcomed 2,500 guests, the yearbook reported.

In the early days of Gates Gym, only boys were allowed to compete in the main space. Girls, as reported by New Trier News, had to use accompanying gyms.

As the years rolled on, Gates Gym hosted a plethora of activities, from wrestling and gymnastics to fencing and table tennis, as well as school pep rallies, college fairs, concerts and gym classes.

But basketball was its claim to fame.

Hall-of-fame coach John Schneiter guided New Trier East in the 1970s and ’80s. In 1973, East finished second in the state and qualified for the finals twice more before the schools again combined in 1982.

New Trier West coach Mel Sheets took over a united boys program. Schneiter did not go far, however; he led New Trier girls basketball, which still did not play in Gates, to plenty of success, including a state-championship appearance in 1989.

Rodgers, who is already a hall-of-famer with more than 500 wins on her coaching resume, grabbed the reins of the girls program in 1997. Soon after, Gates Gym became the girls home court, too.

With the boys program, Sheets won 11 regionals, including 10 straight, in his 14 seasons. In 1999, he gave way to Rick Malnati, a former Trevians standout who took the team to state twice between 1999 and 2008.

Former assistant coach Scott Fricke took over in 2009 and coached the final competition at Gates Gym on Dec. 16.

“I was talking to the team before the game and my voice started cracking,” Fricke said. “I was talking about how much this place means to people. … There are a lot of years of great memories, and the echoing and just how loud it gets, in this building. It’s a special place.”

Through the years, Gates’ inadequacies were patched over again and again.

From new lighting to additional seating to enhanced flooring, the arena did its best to outrun Father Time.

The clock began to run out on Gates in August 2019, when the New Trier Board of Education approved a 15-year facilities plan that identified the gymnasium as a “glaringly evident need.”

Addressing the board in 2020, New Trier Athletic Director Augie Fontanetta said, “Gates was really built in the ’20s as a single-gender, single-event facility. … The other areas around it were just not built for what our needs are today.”

A year later, the board reviewed options for Gates’ future, including renovations that kept Gates intact, recreations with expansions, and a rebuild.

The rebuild received the early support of much of the community, including coaches who saw the gym as a reflection of the school.

“New Trier has always endeavored to be a lighthouse district, and as the best high school in the state, it’s disheartening to see that we are so far behind with our facilities,” Matt Sloan, the school’s boys cross-country coach, told the board in January.

A year-plus of discussion and study preceded the board’s unanimous approval in February 2021 of a $75-million plan to demolish Gates and construct a three-story athletic facility featuring a main gym with retractable bleachers to fit 2,000 people.

Joining the gym on the primary level will be auxiliary gyms, training areas and academic spaces. The lower level will house a six-lane indoor track, while the third floor will host an artificial turf field, climbing wall, cardio area and more academic spaces.

Prior to the approval, then board member Carol Ducommun said, “It’s our job to provide facilities that are safe and respectful and what we have right now is really not safe and I don’t feel that they’re respectful. (This project) supports our educational goals. … We’ve heard that all students will be better off from these facilities.”

The new building will tie into the 2015-17 rebuild of the campus’s west side, in which three outdated buildings were replaced with a 300,000-square-foot one at a cost of more than $100 million.

The designs for the new gym don’t feature a brick-wall perimeter nor is there exposed pipes and radiator clusters. But the new space will honor Gates Gym in multiple ways, officials said, from a domed roof to archways outlined in the brick facade.

Matt Lottich had to see Gates one last time. And he wanted his four children and wife to see it too.

For a stretch in the late 1990s and 2000, you could say Lottich owned the gym. The All-Stater was a four-year varsity starter who averaged 24 points per game his senior season. You will find his name in every quadrant of the program’s record books, and the community packed Gates just to watch him play.

“This place meant a lot to me. There’s no doubt about it,” said Lottich, a Stanford alumnus who is now the head men’s basketball coach at Valparaiso University. “The best memories of high school were in this gymnasium, so I wanted to see it before it got torn down. I wanted my family to see it.”

Lottich said he’s partial to the charm of gyms like Gates, but smiled when he said the new design “looks pretty good.”

Lottich was among scores of alumni who returned on Dec. 16 to celebrate Gates’, as well as New Trier’s, illustrious basketball history.

The supporters witnessed a 56-26 win for New Trier girls against Lincoln Park and a 79-41 victory for the boys against Lake Zurich.

The final official made basket in Gates? It was a post-buzzer free throw from Lake Zurich’s Tyler Obsuszt.

During the final night’s action, school alumni Jeff Burton and Carl Hampton, both of the class of 1975, chatted up former teammates and classmates on the stage abutting the gym.

They both looked around the place and said it looked nearly identical to when they were students — and that wasn’t necessarily a compliment.

By Joe Coughlin | 17 hours ago