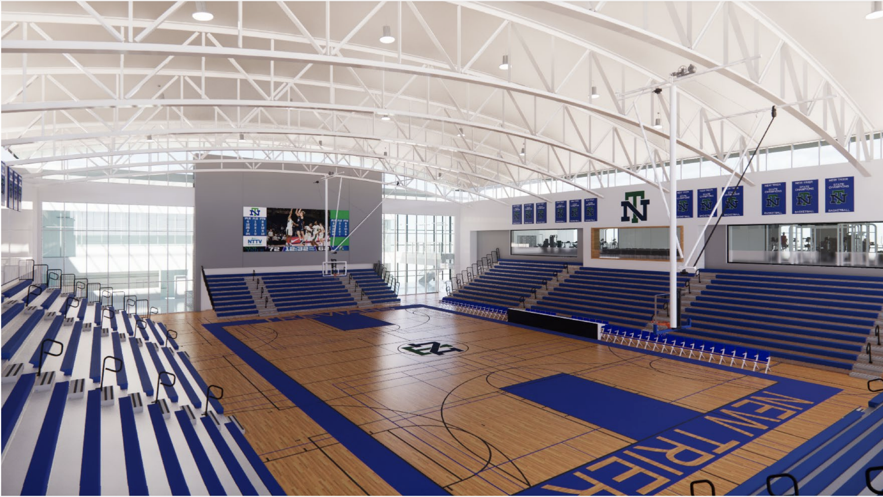 The future of New Trier High School’s Winnetka campus is getting clearer.

On Monday, Jan. 11, district officials and representatives from the architecture firm Wight & Company presented preliminary design renderings and cost projections for a large-scale proposal that would reimagine the east side of the school’s campus, including the historic Gates Gymnasium.

As previously reported by The Record, administrators have been reviewing improvements to the near-century-old athletic facilities since August 2019, when the board of education approved the framework for the district’s 15-year facilities plan.

To address the “significant underinvestment over many years” in the east side of the Winnetka campus, the district is targeting Gates, several ancillary areas around it and the boiler plant.

The gym was built in 1928, while the boiler plant was constructed in 1925, according to school records.

Preliminary plans were presented to the board last month when officials outlined five options that would upgrade the district’s “antiquated facilities with out-of-date gyms and classrooms.”

Although no formal action has been taken, officials are recommending an option to knock down Gates and build a three-story athletics and kinetic wellness facility.

Board members received more specifics regarding this option Jan. 11, as architects walked them through a detailed overview of what each space could look like.

The presentations concluded with an initial cost projections of $75.21 million. A closer-to-final budget is expected to be presented at the board’s February meeting, officials said.

On the lower level, the plan includes an indoor six-lane track, an artificial turf field and an athletic training space.

At the board’s December meeting, Athletic Director Augie Fontanetta said New Trier’s current indoor track space, which is not regulation size, features columns and weight cages that make it “very challenging, very cramped and very unsafe for practices.” He also described the space as one of the school’s “glaring needs.”

Kevin Havens, executive vice president and director of design at Wight & Company, said the new track space is “no comparison” to the district’s current facility and would provide a “night and day difference.”

The second level would include the main competition gym, an auxiliary gym, a weight training/fitness area, academic classrooms, kinetic wellness offices, a concession stand and a New Trier co-op store.

The main gym would fit 2,000 people, officials said, adding that the proposed retractable bleachers would allow for “flexibility of use during KW classes while creating an intimate environment for events.”

Because the second level of the proposed new facility lines up with the existing second floor of the high school, it would provide a “clean connection” between the two with no ramps or stairs, Havens said.

The “vastly improved weight training area” would include a turf field space, an area for virtual training and a direct connection to the cardio training space.

The district is focusing on improving both the strength and conditioning and weight training areas. Fontanetta previously outlined the constraints with the existing facilities.

“Currently, the areas that we have are separated out so that we’re not able to host enough kids in one space,” Fontanetta said. “(This is) particularly challenging for kinetic wellness, if you’re team-teaching, or after school when you have large teams trying to work out at once.”

The auxiliary gym would provide much-needed additional space for kinetic wellness classes, increased accessibility for those with disabilities and more space for the district’s popular intramural programs, officials said.

Current plans for the third floor call for a cardio area, the academic suite of new classrooms and learning spaces, and a small space for an outdoor learning space and climbing wall.

The academic space would feature “an array” of 800-900 square-foot classrooms around a large lecture space for large group activities for any program in the school, Havens said.

“We felt as though giving this offering really maximized the potential of the entire project to blend together academics and kinetic wellness and athletics,” Havens said.

A key goal of the project is to have a structure that is aesthetically consistent with the rest of the current Winnetka campus while also providing top-notch facilities, said Associate Superintendent Chris Johnson.

Officials told the board that the goal is to wrap up the proposal’s “schematic design” phase at the end of this month.

Following that, the board of education is slated to vote on a directive for the project at its February meeting.

Officials would like the project to start in December of 2021 with a completion in time for the 2023-24 school year, or August of 2023, officials said.

Fontanetta told the board that all New Trier sports will offer their full set of programming during the two years of construction. The district plans to utilize its expansive Northfield campus to host athletic events.

“Typically with a project of this magnitude, you’re not able to play a home schedule, so to speak, but we’ll be able to do that so our schedule will remain the same,” Fontanetta said.

Johnson said to finance the project the district will not need to go to the taxpayers. He described the funding plan for the project as “a three-part” approach involving on-hand reserves and borrowing.

The first part of the plan is pulling about $10 million from the district’s fund balance, he said.

The second is issuing either debt certificates or alternative revenue bonds for an estimated annual payment of $3.1 million. This would be paid from the district’s operating funds, which are levied each year, Johnson said.

Lastly, officials plan to use the debt service extension base, which Johnson said is the part of the tax levy that the district uses to issue debt for capital projects. The district would replace $14.5 million in debt set to expire.

The cost project, however, is not final. Officials said there are ways to reduce its price tag.

One option is to reduce the number of track lanes and decrease the overall capacity of the main gym, dropping the cost by $4.66 million.

Another option is to remove the classrooms on the third floor for a savings of $6.9 million.

The board has not expressed significant interest in either of these cost-reduction options.

Additionally, the district is hoping to seize falling interest rates largely created by the COVID-19 pandemic.

“We’re really thinking about interest rates that are at historically low levels,” Johnson said. “That really allows us to maximize the use of our taxpayer resources to benefit our students and the community rather than pay that money in interest rates to banks.”

‘The investment will be a gamechanger for our students, athletes and coaches’

Four members of the public addressed the board of education Jan. 11 and urged it to move forward with renovations to the east side of the campus, particularly to athletics and kinetic wellness facilities.

Sarah Ricciardi, president of the New Trier High School Booster Club, told the board it will only get “harder and harder to stay relevant and compete locally and nationally if we do not provide the proper environment for our students to grow and develop.”

“We have made due with our existing facility for about as long as I think is possible,” she said. “And I think we owe it to our students and our programs, our community as well as our history to invest in our facility and our future at this time.”

She added that although her sons will be graduated by the time it’s completed, she “wholeheartedly supports it.”

“For New Trier to stay relevant, to stay the beacon that we have always been and to claim a spot as a future leader, we need to move our athletics facilities into the 21st century and provide an inspiring space where excellence can be achieved,” she said.

The New Trier alumnus, who also teaches science at the school, said he was blown away when he saw the early plans for the facility. He added that he believes the investment “will be a gamechanger for our students, athletes and coaches.”

Sloan discussed the limitations of the current facilities, saying New Trier is “far behind” its peers. He described the current indoor track as a “basement with a track surface with tight turns.”

“New Trier has always endeavored to be a lighthouse district, and as the best high school in the state, it’s disheartening to see that we are so far behind with our facilities,” he said.

But he concluded by reiterating his excitement.

“I think I can speak for the entire coaching community that we are thrilled about the prospect of the new athletic and academic spaces,” he said. “Coming out of such a challenging 2020, which has spilled unfortunately into 2021, it’s awesome to have these proposed positive improvements being discussed. That thought of a new beginning would be terrific for the entire New Trier community.”